Here’s Why The Revelation Of Judge Kavanaugh’s Accuser Was Inevitable, And Why It Still Means Nothing

Scott Morefield
|
Posted: Sep 17, 2018 12:01 AM
Share   Tweet
The opinions expressed by columnists are their own and do not necessarily represent the views of Townhall.com. 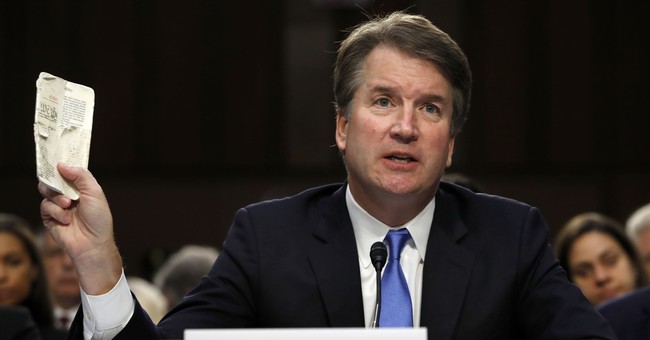 Ever since rumors began swirling on Capitol Hill about a mystery letter in the possession of Democratic Senator Dianne Feinstein, it was only a matter of time before Judge Kavanaugh’s formerly “anonymous” accuser made her grand entrance to the national stage. After all, Democratic attempts to delay, interrupt, grandstand, and even “Spartacus” their way out of replacing former Justice Anthony Kennedy with a conservative jurist of President Trump’s choosing had thus far been unsuccessful, so why not pull out the old classic “Anita Hill” tactic? It may or may not work, but Dems are just trying to run out the clock at this point, right?

And it was becoming all too clear that “anonymous accuser” wasn’t going to cut it, not with so much at stake.

Enter Christine Blasey Ford, the as-of-Sunday no-longer-anonymous (and already lawyered-up) Kavanaugh accuser who contends that the then-prep-school student - as The Washington Post reported - “pinned her to a bed on her back and groped her over her clothes, grinding his body against hers and clumsily attempting to pull off her one-piece bathing suit and the clothing she wore over it. When she tried to scream, she said, he put his hand over her mouth.”

The alleged incident left Ford so traumatized, apparently, that she neglected to go public or even file a police report for … wait for it ... 36 years.

And it’s not like she didn’t have plenty of opportunities during those nearly four decades. Yet, Ford was silent with Kavanaugh clerked at the Supreme Court, silent when he was a White House attorney, and still silent after Kavanaugh became a U.S. Circuit Judge in 2006 - a process that required a lengthy and controversial Senate confirmation - and all the years thereafter, even as he weighed in on important cases regarding the environment, separation of powers, human rights, and criminal procedure, among others.

Now, on the eve of Senate confirmation, Ford - a California clinical psychology college professor who just happens to be a registered Democrat - decides that justice MUST be served. It’s her “civic responsibility,” don’t you know.

So yeah, color me skeptical.

“I thought he might inadvertently kill me,” Ford told the Post. “He was trying to attack me and remove my clothing.”

Sounds serious, and it would be if it were true. But most people who almost get killed by criminals “trying to attack” them, you know, go to the police. But Ford, Ford actually told nobody until 2012 while in couples therapy with her husband of then-10-years. Even then, notes from the therapy say nothing of Kavanaugh’s name, only that she was, the Post reported, “attacked by students ‘from an elitist boys’ school’ who went on to become ‘highly respected and high-ranking members of society in Washington.”

In another therapy session in 2013, Ford reportedly “described a ‘rape attempt’ in her late teens.” Except, she was supposedly 15 at the time of the incident with Kavanaugh, hardly “late teens.” That may merely be shoddy wording, but it does underscore the ambiguity of trying to “legislate” an allegation that old and unsubstantiated.

Ford alleges that after she escaped and locked herself in a bathroom a “drunk” then-17-year old Kavanaugh and his classmate went “down the stairs, hitting the walls.” Then, after five or ten minutes, she exited the bathroom, walked through the living room, and out the door. She doesn’t recall how she made it home, but Ford didn’t tell her parents because she didn’t want to get in trouble for being at a party with alcohol. (I’m not sure how that explains why she didn’t say something when she turned 18, or 21, or at any point during the next 4 DECADES, but I digress.)

Still, even the most skeptical among us might acknowledge that something may have happened that evening in 1982. Ford supposedly passed a polygraph test, so if those can be trusted we know at least she believes it. But what exactly? An attempted rape? A misplaced grope? A clumsy, unwanted kiss? A drunken make-out session that led to nothing? All of it’s up in the air, and when you’re looking 36 years in the mirror, especially if you’re a liberal knowing you could score a much-needed goal for the #Resistance, it can pretty much become whatever you need it to be.

And things only become more complicated when you enter the murky, controversial world of “psychotherapy,” where dreams and imagination can become reality, at least in one’s own mind. A world Ford is apparently neck-deep into, for it was apparently only after “going through psychotherapy” years later that Ford “came to understand the incident as a trauma with lasting impact on her life.”

On that note, the following quote isn’t definitive or even necessarily applicable, but it’s certainly something to consider:

“To quote the American Psychological Association, there is ‘little or no empirical support’ for the concept of repressed or dissociated memories of sexual abuse,” writes Psychology Today’s Temma Ehrenfeld in a 2015 piece about the repression of childhood memories. “False memories are well-documented in legal history. We are vulnerable to what psychologists call ‘suggestion’ and can innocently construct false or ‘pseudomemories’ of events that never occurred, if they are encouraged by someone we trust. One disturbing 2007 study found that when people recalled sexual abuse in childhood during therapy their account was less likely to be corroborated by other evidence than when the memories came without help. Sadly, well-meaning therapists have done their patients harm.”

The overall point is - we just don’t know with 100 percent certainty, although my money is closer to Judge Kavanaugh’s version than Ford’s. Obviously, although the SCOTUS nominee has plenty of support from those he knew from his youth, we can’t get inside the minds of either Kavanaugh or Ford, and we certainly can’t ask God to replay the “tape” of what happened 36 years ago in that upstairs bedroom. However, we can and should expect a certain evidential standard to be met before someone’s career is destroyed.

So, as Democrats go full-on “Anita Hill” to derail this nomination, will it work? It may. Sadly, we live in a world where someone’s career can be derailed or destroyed, or even liberty denied, on the basis of no other evidence other than one person’s accusation from decades ago, especially if the accuser is a woman (bonus points for liberal women, but only if the alleged perp is a conservative - looking at you Keith Ellison!).

Granted, sexual assault is a serious matter that should be dealt with harshly. But, so are false allegations and so is malicious slander. And unless such a delayed charge can be proven beyond a reasonable doubt, that’s exactly what this is, “anonymous” or not.