As The Washington Establishment Memorialized John McCain By Hating On A Sitting President, Donald Trump Got The Last Laugh

Scott Morefield
|
Posted: Sep 04, 2018 12:01 AM
Share   Tweet
The opinions expressed by columnists are their own and do not necessarily represent the views of Townhall.com. 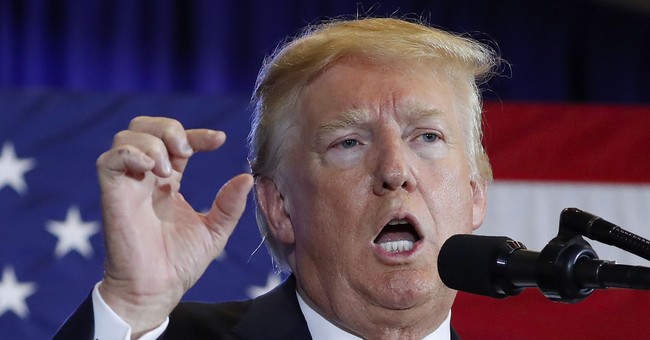 “[John] McCain’s funeral seems to be shaping up as the Washington Establishment’s response to Trump. Wonder if it’ll have a lasting impact.”

So wrote Wall Street Journal correspondent David Wessel on Saturday morning, reacting to the fact that the late Senator’s funeral rites seemed to be essentially about “two things” - as political comedian Tim Young put it via Twitter - “Remembering Sen. McCain and hating on Trump.”

“From the reporting on it, it seems the latter was sadly more important than anything else,” continued Young.

“There has never been quite such a spectacle against a sitting president,” tweeted Financial Times columnist Edward Luce.

“Watching the endless, days on end, 24/7 coverage of the moving memorials and ceremonies for American hero John McCain, realizing that if he were a strong Trump supporter, this would only get a 90 second piece once every few hours and very few celebrities in the crowd,” tweeted radio host Mark Simone.

Indeed, family and friends aside, the so-called “Washington Establishment” and other “elites,” from politicians to former presidents, from beltway bureaucrats to celebrities and media figures, were arrayed in all their pious splendor on Saturday to rightfully celebrate the life of one of their own while taking absurd, out-of-place potshots at someone clearly NOT part of the “in” crowd.

Yet in so doing, they showed their true colors to half of America.

Even Meghan McCain, by all accounts a good and genuine person and a solid, articulate voice for conservatism on The View, delivered a powerful, eloquent eulogy that would have been perfect were it not for her desire to not just memorialize her father, but also bash the sitting president.

“The America of John McCain has no need to be made great again because America was always great,” said Meghan McCain in an obvious jab at Trump.

She also called American greatness “the real thing, not cheap rhetoric from men who will never come near the sacrifice he gave so willingly, nor the opportunistic appropriation of those who lived lives of comfort and privilege while he suffered and served.”

Shockingly, Meghan wasn’t talking about socialists there, although in a vacuum one might think that because of her references to “cheap rhetoric” and “opportunistic appropriation” and the fact that those actually come from people who want to steal the hard-earned money of working Americans and impose a system that would literally turn America into a Third World country.

No, instead of bashing policies that actually do hurt people and those who espouse them - if one is going to bash anything at a funeral - McCain instead chose to trash President Trump.

Granted, a grieving daughter will and should get a lot of leeway. Meghan McCain certainly has the right to say what she wants and have our sympathies, although we also have the right to think that part of what she said was unfortunate.

The next two, however, are another matter entirely.

“John McCain understood that if we get in the habit of bending the truth to suit political expediency, or party orthodoxy, our democracy will not work,” said former President Obama, getting his mythology wrong as to who actually chopped down the cherry tree.

If that’s true, what does that say about his voters?

“He respected the dignity inherent in every life, a dignity that does not stop at borders and cannot be erased by dictators,” Bush continued. “John’s voice will always come as a whisper over our shoulder: ‘We’re better than this, America is better than this.'”

All week, the establishment media and other assorted talking heads had been reminding us of the countless ways the person America just lost was, in every possible capacity, better than the person who leads our country now. Why, President Trump isn’t worthy of shining John McCain’s shoes, we’re told, because “civility” and “decency” and “honor” … as if Trump has none of those things and McCain was a paragon of virtue. As if liberals actually cared about stuff like that in the first place except as a means to criticize President Trump.

(Ironically, if liberals loved McCain as much in 2008 as they pretend to now, we’d be memorializing a former president and not just a United States senator!)

By all accounts, John McCain was a good and sincere man who loved his country, passionately believed what he believed, and meant well. He was doubtless a wonderful husband and father, an honorable man, and yes, despite Trump’s ill-advised characterization of him during the 2016 election, a bona fide war hero.

And yet, from endless wars to a lax immigration policy and even to his vote that single-handedly saved a healthcare law that will eventually collapse, he was also a man who espoused policies that has and will result in untold suffering for millions upon millions of people.

And if John McCain the politician was good at anything at all, it was letting liberals have their way.

Surely it’s possible to appreciate the honorable man, the war hero, the devoted husband and father while also abhorring the job he did as a politician.

Meanwhile … “MAKE AMERICA GREAT AGAIN,” Trump tweeted on Saturday in all caps, not long after the funeral / Trump hate-fest was over, letting his supporters know that the man the “Washington Beltway” loves to bash, for all his faults, is actually busy making the lives of millions of Americans better, right here and right now.

Liberals may pretend they’re concerned about his personal faults, but THAT is what irks them most of all.