Scott Morefield
|
Posted: Jul 30, 2018 12:01 AM
Share   Tweet
The opinions expressed by columnists are their own and do not necessarily represent the views of Townhall.com. 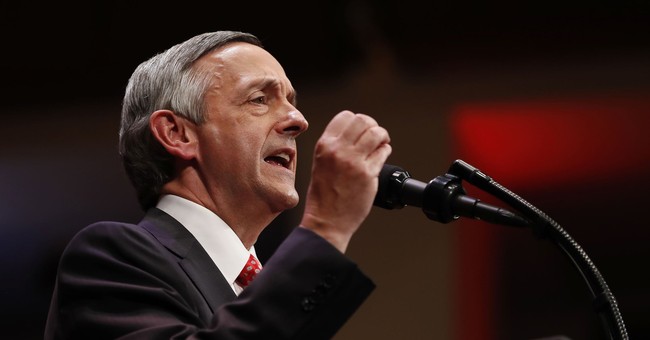 Dallas megachurch pastor Robert Jeffress made headlines earlier this month by invoking the memory of Ronald Reagan in response to an anti-Trump pastor’s contention that Trump supporting Christians had somehow (shudder) “sold their souls” to support the president.

“This is not an unusual thing,” Jeffress told Fox News’ Ed Henry. “We’ve been here before. Back in 1980, evangelicals chose to support a twice-married Hollywood actor who was a known womanizer in Hollywood. His name was Ronald Reagan. They chose to support him over Jimmy Carter, a born-again Baptist Sunday school teacher who had been faithfully married to one woman. The reason we supported President Reagan was not because we supported womanizing or divorce. We supported his policies. And that’s true here, Ed. We are choosing to support his policies. We’re not under any illusion that we were voting for an altar boy when we voted for President Trump. We knew about his past. And by the way, none of us has a perfect past. We voted for him because of his policies.”

Needless to say in this deeply divided time, Trump-hater reaction was over the top. Turns out, Jeffress’ hard-hitting yet true doses of reality could only be countered by rhetoric, and the empty kind at that.

Trump’s supporters predictably appreciated Pastor Jeffress’ comments and understood what he was trying to say. Critics, on the other hand, seized on the matter to accuse the Dallas pastor and other Trump-supporting Christians of hypocrisy and worshipping Satan and stuff.

Liberal Christian Frank Schaeffer wrote that, if Jeffress is correct, “it means that evangelicals' god is Satan.”

We could go on and on with the liberal hyperventilating, but the most interesting criticism came from the “right.”

“All I can say is go F yourself,” tweeted Michael Reagan, the former president’s son, who took particular issue with the Trump comparison with his father vis-à-vis the ladies.

“He equated my father — who was divorced from my mother Jane Wyman when he was dating in Hollywood and not yet married to Nancy — to Donald Trump, who was dating Playboy playmates and who knows who else when he was married,” Reagan wrote in a Newsmax piece.

I see Reagan’s point, although any moral issues either Trump or Reagan had prior to the Oval Office would pale in comparison to what, for example, former President Bill Clinton did with at least one woman IN the Oval Office. Nevertheless, I’m pretty sure he missed Jeffress’ point entirely, which was that if we waited for a president with a squeaky clean past we’d looking at sky-high interest rates, record unemployment, and a whole host of other, not-so-squeaky-clean issues right here in the present day.

As Jeffress states, the fact that Jimmy Carter was a moral person is incontrovertible. Would these so-called “conservative” Trump haters rather have a Carter in office, along with his liberal policies and horrific economy, over a morally flawed Trump and the millions whose lives have been made better by his policies?

Of course they would, but doesn’t that make their take the very definition of short-sightedness?

Nevertheless, the hits kept coming from the right.

“Trump Derangement Syndrome is common,” Jeffress said on a televised broadcast Friday, “and it’s sad to see our Savior caught up in the undue criticism of Trump. Just because the guy isn’t morally qualified to be a pastor and you wouldn’t leave him alone with your wife, doesn’t mean that he can’t be a great upstanding leader of our country.”

Jeffress also pointed to biblical examples of leaders exactly like Trump, such as King David, King Solomon, and Beelzebub. “God can use anyone, and it’s sad that the Savior is so blinded by his TDS that he can’t see that.”

Pretty funny stuff, actually, and in fairness, they hit liberals too (and I’m a fan). Still, were not David and Solomon great kings who, despite their many faults, accomplished great things for their country? Yes, the words are ironically placed in Jeffress’ mouth by the Bee writers, but is it not true that God can use anyone?

I’m no doctor, but I’m pretty sure that it’s not Jesus Christ, but rather the writers at Babylon Bee who have the acute case of “Trump Derangement Syndrome” here.

Here’s the reality: God has clearly used a flawed President Trump to accomplish great things, and He has also used the church Jeffress shepherds in an entirely different yet important way, ministering to and serving their community and beyond.

First Baptist Dallas, celebrated its 150th anniversary of ministry on Sunday. The weekend included a visit from Texas Governor Greg Abbott and a nice write-up from Dallas News columnist Sharon Grigsby, presumably a liberal herself, who wrote glowingly of a church that, despite the “long shadow” cast by Jeffress’ very public embrace of President Trump, has a “history of service to the city” and a positive “day-to-day influence on Dallas.”

“This was a tough one to write, but I believe First Baptist Dallas is more than Robert Jeffress,” Grigsby tweeted. “It may be asking too much for you to read this with the kind of open mindedness that Jeffress often doesn't display, but I hope you will give it a shot.”

Grigsby praised the church’s strong support of Dallas police, the many ways its members care for those in need, and its post-disaster outreach to other cities, such as Houston after Hurricane Harvey, but seems to insinuate that these things all occur despite Jeffress’ leadership and not right along with it.

You know, because anyone who supports President Trump must secretly kick puppies and steal grocery carts from the homeless.

The church, Grigsby writes, includes a “diverse group of people, with a wide range of age, race and economic status,” because it’s presumably a shocker that a church pastored by a Trump supporter would be “diverse,” or something.

In reality, it’s Pastor Jeffress who manages to keep his ministry and his politics separate, as Grigsby grudgingly acknowledges.

“People think that because of my involvement with President Trump or my appearances on Fox News that we are a highly political church and people are shocked when they come here and don’t hear anything political,” Jeffress told Dallas News.

Jeffress laughed as he told Grigsby that he has “Democrat deacons,” adding that his church doesn’t “check people’s voting IDs at the door.”

“On Sunday, politics aren't their preacher’s message, the Bible is,” wrote Grigsby. “That’s why they drive from all over North Texas to fill the massive worship center and historic sanctuary.”

It’s a fitting tribute from the Dallas media, and far better than the treatment Pastor Jeffress has received from liberals and the “Trump Derangement Syndrome” afflicted right.

Turns out, Jeffress has something pretty major in common with the president his supports. With both men, the reality doesn’t come close to mirroring the empty rhetoric displayed by their enemies.