Scott Morefield
|
Posted: Jun 11, 2018 12:01 AM
Share   Tweet
The opinions expressed by columnists are their own and do not necessarily represent the views of Townhall.com. 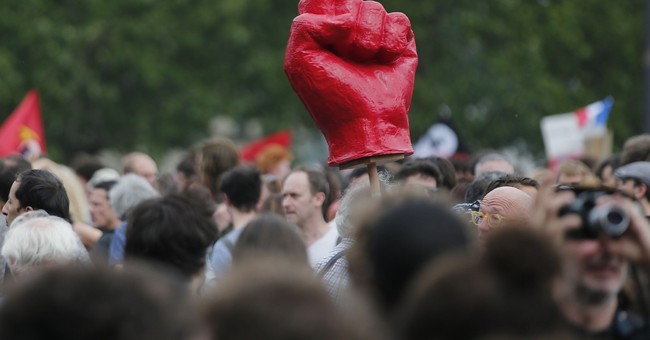 When liberals start talking about “values,” watch out! They’ve been doing it a lot lately, probably because they want you to think they’re “good people.” It’s as if their entire sense of self worth is built around virtue-signalling, or unashamedly proclaiming their “virtues” to the rest of us unredeemable deplorables, all while unashamedly working to implement policies that would literally destroy everything good about Western civilization.

Except, liberals really only have one virtue, one value, one “moral” belief upon which they can hang their hat and check off that coveted “good person” box, at least in their own minds.

Wikipedia defines “social justice” as the “concept of fair and just relations between the individual and society ... measured by the explicit and tacit terms for the distribution of wealth, opportunities for personal activity and social privileges.”

So in other words, liberals have communism down pat.

But as far as the other “values” go, real ones, the ones that actually built our civilization, well, Leftism has relegated the importance of those to the dustbin of history, right along with mullets and fidget spinners.

You know, outdated, non-woke stuff like the nuclear family, hard work, honor, law-and-order, reverence to one’s Creator, sexual morality, and the sanctity of all lives, even those still in the mother’s womb. Or how about the value of telling the truth because it’s the truth, not some politically-correct fantasy? For years, even before Pat Robertson’s Christian Coalition flexed its political muscle in the 1980 election, those were the values, the virtues that politicians of all parties shared, at least to some degree.

But now, there is only one “value” upon which woman, man, gender fluid or otherkin shall be judged, and that is her, his, or ze’s commitment to “social justice” - whatever THAT means these days, because unlike objective morality, it’s constantly changing. And if you don’t agree with some aspect of how they define the one morality they have in their arsenal, you are a “bad person,” according to them, and worthy of being destroyed.

We should have seen this coming, of course. Because when humans give up objective truth, or the fundamental concepts that define real right from real wrong - an understanding of the things, dare I say it, that the Bible calls “sin” - the innate need to feel ‘right,’ or justified, in one’s own eyes still exists.

Enter the made-up “value” of social justice, because liberals, if they can’t follow the objective moral values of the Bible, figured out that they can be “good people” too just by taking what should be and is a good thing - simply treating all humans with love and respect - and relentlessly obsessing over every perceived microaggression that could possibly hurt someone’s feelings.

And in doing so they’ve become more Pharisaical than the Pharisees of Jesus’ time ever hoped to be - deplatforming, ending careers, bludgeoning and ostracizing people for failing to toe the politically correct line in some way.

Corporations co-opted by rabid social justice warriors have gone all-in on the so-called “value” train, because they’ve got “values” too, even if none of them are real. If you’ve heard them drone on once, you’ve heard it a million times.

When Google fired James Damore for stating obvious facts, its CEO said Damore’s contentions were “contrary to Google's basic values.” Because to Google and other SJW-infiltrated companies, truth isn’t a value.

When Starbucks decided to turn their facilities into a homeless shelter because non-customers who happened to be black pitched a fit about not being allowed to use the restrooms, the company harkened to their “mission and values” - of which apparently making money isn’t included - to justify the decision.

When liberal bastion California passed a travel ban last year on state-funded and state-sponsored travel to states with laws on the books they consider “discriminatory” against LGBTQ people, Equality California’s Rick Zbur hailed it as just punishment for laws that aren’t in line with the “values that make California the vibrant economic powerhouse that it is.” Because obviously being an “economic powerhouse” is directly correlated with forcing Christians bakers to bake gay wedding cakes, or something.

When former New Orleans Mayor Mitch Landrieu ripped down monuments that have been in place for generations, he reasoned that such monuments “failed to appropriately reflect the values of diversity and inclusion that make New Orleans strong today.” Truly, do we need another case study than New Orleans to prove that liberals think if you’re “diverse,” you need no other morality?

In his criticism of Hungarian Prime Minister Victor Orbán for protecting his country against the Islamic migrant invasion, none other than George Soros said that Orbán was challenging “the values on which the EU was based.” Because if Western nations aren’t about bringing in unlimited hordes of Third Worlders and giving them loads of free stuff, what else is there in life?

Yes, we get it - racism is bad and mutual respect and inclusion is good. But taking one sin and one virtue and acting as if those are the only ones that matter is the epitome of human folly, especially when humans have tossed to the curb the one true source of objective morality.