Why Democrats Are Terrified of 'Woke Kanye'

Scott Morefield
|
Posted: Apr 30, 2018 12:01 AM
Share   Tweet
The opinions expressed by columnists are their own and do not necessarily represent the views of Townhall.com. 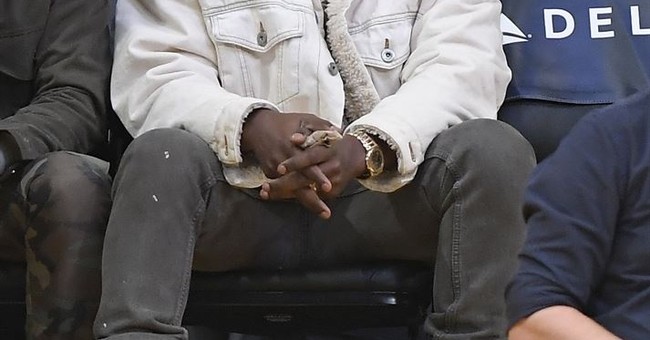 Turns out, when you’re a famous musician with 28 million Twitter followers people are going to sit up and pay attention to what you tweet, regardless of the topic.

So when rapper Kanye West, a man who got over 41,000 likes for tweeting the word “decentralize,” lit the social media world on fire last week with a series of tweets seeming to support President Trump, the world was quick to take notice. Is one of the most successful recording artists of our generation actually ‘waking up’ to the folly of liberalism? Has Kanye actually been red-pilled?

On the one hand, conservatives understandably but a little hypocritically took an altogether different approach with Kanye than the “shut up and sing” imploration they typically would take were such a celebrity spouting off the usual liberal nonsense.

As for liberals - along with the usual hysterics, name-calling, and denigrations of “mentally ill” that are generally doled out as a matter of course to those who even partially leave the Democratic thought plantation were implorations to, well, essentially “shut up and sing.”

A Thursday exchange between Fox News co-hosts Juan Williams and Kimberly Guilfoyle on The Five illustrates the divide.

“[Kanye’s] done nothing,” the liberal-leaning Williams said. “When it comes to substance, this guy has nothing. This is the guy in fact who said Cosby was innocent. This is the guy who condemned George W. Bush. You guys are suddenly flocking to him because it’s convenient but why you would take him seriously I have no idea.”

“That’s your opinion, but he’s actually a serious businessman,” Guilfoyle shot back. “He’s hugely successful … and he’s entitled to have his opinion like anybody is. You’re trying to diminish him because he’s a singer, a rapper.”

Of course they’re both right, to a degree. Kanye may be an enormously talented artist and a successful businessman in his own right, but that doesn’t make him a political expert, nor does he pretend to be. “I'm not even political,” Kanye tweeted. “I'm not a democrat or a republican.”

And yet, by tweeting a picture of himself wearing a red MAGA hat, perhaps the most iconic and enduring symbol of the miraculous 2016 presidential campaign (and thus of glorious liberal butthurt), Kanye seared an image into the public consciousness that’s unlikely to go away anytime soon.

In truth, whether he’s is an unstable, “mentally ill” celebrity, a budding Heritage Foundation policy expert, or somewhere in between, one would make a huge mistake to underestimate the astounding significance of West’s actions. Because even by acknowledging President Trump, someone who is literally the devil incarnate to liberals, as a “brother,” by advocating free thought, and especially by wearing that glorious red hat, West just opened the door to the exact kind of thought that has the potential to change lives by the millions - conservatism.

Even if he’s not a conservative himself.

Sure, maybe Kanye will get there eventually (listening to Candace Owens is a great start!), but he’s not there yet - not by a long shot. You may have missed it, but West also tweeted that he loves “Hillary too,” insisted at the behest of his wife that he doesn’t “agree with everything Trump does” (obviously, one doesn’t have to agree with Trump on all issues to be a conservative, but the point is that West was catering to the ‘haters’ a little with that tweet), and even tweeted a picture of Parkland gun control activist Emma Gonzalez under the words “my hero.”

In other words, even ‘woke Kanye’ has a long way to go before he’s the next Thomas Sowell.

Still, the image of someone like Kanye West wearing that iconic red hat encouraged conservatives just as much as it triggered liberals. At least it encouraged me. ‘Woke Kanye’ is way cooler than Taylor Swift and George Bush-bashing ‘SJW Kanye,’ by a yuge margin. Could this be the long-hoped-for crack in the armor of the black Democratic voting bloc? Could Kanye West, simply by his acknowledgment if not his endorsement of “our” side, pave the way for conservatives to finally get past the noise and reach black people with a message that’s sure to help them far more than liberalism ever has?

Pro-Trump singer Joy Villa seems to think so. “West has shattered the stereotype and myth that ‘all Republicans are racist,’” Villa writes in a Fox News op-ed. “He has challenged the music industry’s identity politics. He’s a hero to free-minded individuals of all colors.”

Liberal outlet The Atlantic is certainly concerned. “Now, were [Kanye’s] tweets to go ignored in the press they, indeed, would hold less power,” writes Spencer Kornhaber. “But they do hold power, already … ‘I love the way Candace Owens thinks,’ has likely already sent a lot of his followers, many young and impressionable, to the conservative pundit’s YouTube channel where she rails against the ‘losers’ in Black Lives Matter. It’s not unreasonable to think that his tweet may well have a measurable effect on this country’s politics.”

For a group that hasn’t voted GOP by any margin over 15 percent since Jackie Robinson campaigned for Richard Nixon in 1960, any “measurable effect” at all could be disastrous to a party all out of ideas yet hellbent on keeping all hands inside that ‘Democratic plantation.’