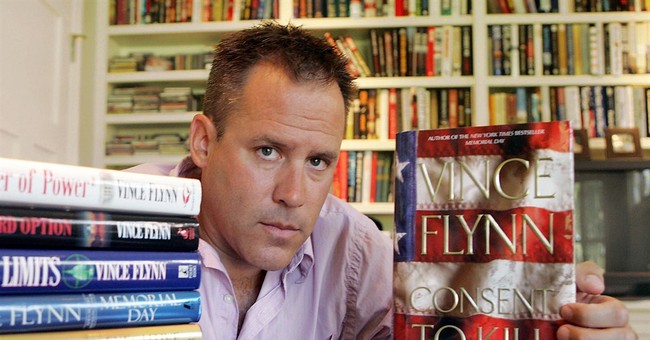 Tonight, after I put my children to sleep in their beds, I stopped for a moment in front of my fireplace mantel and stared. Some mantels are decorated with a pretty work of art, a colorful flower arrangement, or maybe just left plain. In my home, I display a selection of books from the last 10 years on my mantel.

These books remind me of the great voices within our movement, and their subjects reflect the ever-changing controversies that plague the American political landscape. I look at these books several times a day in order to remind myself that I am not alone in this fight.

Names like Palin, Breitbart, Coulter, Malkin, and Rumsfeld are just a few which I choose to put on my mantel; however, tonight, as I looked at these books, my eyes fell upon Consent to Kill by Vince Flynn, and for the first time all day, I allowed myself to cry.

Vince Flynn was a New York Times bestseller and the creator of such great characters as Stan Hurley, Irene Kennedy, Scott Coleman, and Mitch Rapp. To me, Vince Flynn was not only an amazing author; he was a friend and a mentor, never wasting an opportunity to encourage a person to find the magic of her own life story.

I first met Vince in 2005 when he was beginning his book tour for Consent To Kill. At the time, I was just starting out in conservative media and was Executive Producer for The Steve Gill Show out of Nashville. While I was constantly amazed by the people to whom I was introduced, some of them surprised me by their lack of respect for those around them -- Vince wasn't among those people.

Our original plans consisted simply of a live in-studio interview. But Vince’s enthusiasm and excitement were so contagious that pretty soon I, along with several other staff members, agreed to spend the rest of the day at the various book signings Vince had scheduled in the area.

Every person Vince met that day, regardless of how they arrived, left with a smile. Every signature he placed in a book was accompanied by a few minutes of dialogue, and I was amazed at how this man could make even the shyest people leave with a beaming smile and a sparkle of excitement in their eyes. His optimism was like wildfire, and he never expected special treatment. Vince respected every person he met as if each was the main character in his next book.

As the day came to a close, I was beyond words when Vince invited my boss, my then-fiancé (who is now my husband), and me to join him for dinner. We talked that night about patriotism and devotion, and Vince brought great humor and wisdom to the conversation. Never pretentious, always sincere, Vince’s heart of gold and love for his country shone as bright that night as they do in all of his writing.

Over the years, I would email back and forth with Vince, checking on health, family, and his latest book project. It was amazing that Vince always had words of encouragement, and in what I now realize was our last conversation, Vince gave me one of the last pushes I needed to switch from being behind the scenes and casually writing, to finding my voice and recognizing that my greatest responsibility was to listen first and represent people in whatever opportunity I was given. I have always wanted that same ability to make enthusiasm contagious, and I believe it’s only because Vince had the purest of hearts and that he was able to accomplish this.

Read any of Vince’s writing, and you will agree the pages are filled with more fact than fiction. It is apparent that long months of research and study went into every book. He knew his books were his message, and while some might have read them for recreational purposes, I think Vince figured his books would be his way to warn the American people of what will happen if our government is allowed to grow bigger than we can control.

My heart tonight aches for his beautiful wife and children, as well as for America. We lost a great visionary who used his writings, his personality, and his life to help protect the freedoms we as Americans enjoy.

As we have done in the past, we must listen to those who might have left this earth too early. We must take what words, videos, and memories we have of their message and do our best to continue the fight. Vince has now joined the ranks of many great patriots who fighting for good on a whole new level, and while I would have preferred to stand next to them as the battle continues to grow, I know that at the very least they are watching and cheering for us from above.