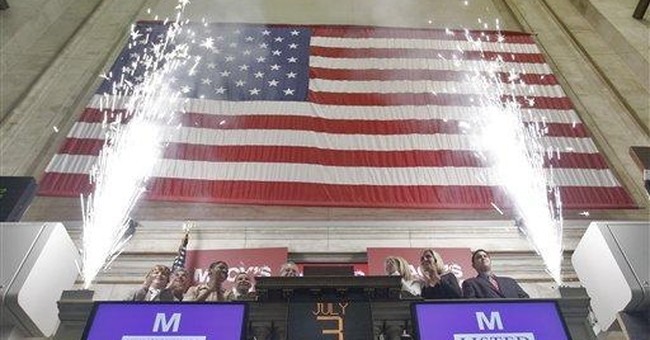 As America's 232nd birthday approaches, the stakes have never been higher.

Friday marks the 232nd anniversary of the signing of the Declaration of Independence - one of the most historically significant documents ever penned. What seem like innocuous phrases today were earth-shattering at the time, including perhaps the most famous phrase from that remarkable document:

"We hold these truths to be self-evident, that all men are created equal, that they are endowed by their Creator with certain unalienable rights, that among these are life, liberty and the pursuit of happiness. That to secure these rights, governments are instituted among men, deriving their just powers from the consent of the governed."

Such sweeping statements had never been uttered publicly by man against their king. Ignoring precedence in Philadelphia that sweltering summer, Thomas Jefferson penned the treatise for the future of all democracies. A future in which America would be the shining city on the hill for the entire world to admire, envy and emulate.

This achievement was not easily attained. As a country, we have faced and will continue to face significant challenges. America has been tested from outside, as well as inside, our borders. We have had to stand strong against these foreign and domestic aggressors. We have had to overcome our own obstacles while helping other nations strive for freedom. And through it all, we have remained one union, striving to achieve the democratic ideals of America’s forefathers.

As the 21st century begins, America faces some of its greatest challenges yet. This Friday, as they do every day, our brave men and women are fighting around the world to ensure our freedom and to expose people to democracy and freedoms that only existed in their wildest dreams. Freedoms they dared not publicly speak of for fear of retribution; freedoms most Americans take for granted. On America’s Day of Independence it is important to remember that for many around the world, freedom is a gift that needs to be cradled while still in its infancy. Our country has a duty to help them care and nurture that gift through such difficult transitional periods.

While we count our blessings here in America, there are still several challenges facing our great land. Economic growth is slowing as gas prices continue to rise. We must work together to grow jobs and economic opportunities and find solutions to lower energy prices. Slogans and arrogance are not the answers to our problems. American ingenuity has allowed us to rise to meet all challenges in the past and will do so again. But it takes time and we need to work together towards short-term solutions while simultaneously working towards our long-term goals. It’s a tough job, but that's the American way.

In addition to rising to meet our challenges, we must continue to be ever-vigilant in the defense of our own basic freedoms. Big government is not the answer, it's the problem. It is imperative to have a robust Republican presence in the Senate to ensure individual freedoms, such as: the right to choose your own physician; the right to keep your hard-earned money and not have it reapportioned by the government; and your right to know your government is doing everything in its power to protect and defend our nation from aggressors.

Without a robust Republican presence in the Senate, and the unfortunate possibility of Democrat control of the other branches of government, these rights will be in jeopardy. Not to mention the expected payback to Big Labor when Democrats eliminate secret ballot elections, while continuing to slash funding for investigating union corruption. This is not the freedom our Founders envisioned when they risked life and limb to establish our great Republic. And it is not the freedom Americans should have to settle for today. This is not the change we deserve.

America was founded to be the freest nation on earth, a small government deriving its power from the consent of the governed. Today, that freedom is in grave danger as the forces of big government threaten to reign in your freedoms. Democrats continue to believe government is the solution, and they know best for each person. I, along with Senate Republicans, disagree. I believe people know what's best for them and what's best for their government.

America continues to be the greatest country on earth, but the work is never over. As Ronald Reagan said:

"Freedom is never more than one generation away from extinction. We didn't pass it to our children in the bloodstream. It must be fought for, protected, and handed on for them to do the same."

The fight for freedom is never-ending and the stakes have never been higher. Difficult choices must always be made, and in November the choice is clear, the choice is Republican.

With that, I will end by saying Happy Birthday America, may your greatness shine for many more centuries. Happy Fourth of July to you, your families and friends, and I hope you all have a happy and safe holiday.