Sam Adolphsen
|
Posted: Feb 05, 2021 12:01 AM
Share   Tweet
The opinions expressed by columnists are their own and do not necessarily represent the views of Townhall.com. 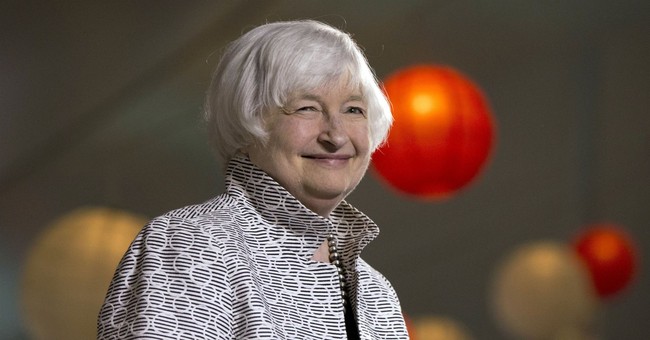 President Joe Biden had a busy schedule for his first day at work. Before his decorators put the finishing touches on kicking Churchill out of the Oval Office, President Biden planned to sign 15 executive orders that intended to kick-start his agenda for the economy, the pandemic, and more.

The ‘American Rescue Plan’ is one expensive wish list. Biden’s proposed stimulus plan alone would cost taxpayers nearly $2 trillion, whose implementation will be heavily influenced by the Treasury Secretary.

Here’s where the bad news becomes worse news—Joe Biden’s nominee for Treasury Secretary is Janet Yellen. If it feels like history is somewhat repeating itself, that’s because it is.

We’ve seen the economy under Janet Yellen’s management, and it’s not great. Yellen oversaw one of the slowest economic recoveries in American history as chair of the Federal Reserve for the Obama administration. During her tenure, economic growth averaged less than 2.1 percent between 2010 and 2013, which amounts to half the 4.2 percent average growth rate following similar recessions.

Wage growth was also sluggish during the Obama administration. In sharp contrast, the real average U.S. household income increased by $4,379 in 2019. That is nearly 50 percent more than what was achieved during Barack Obama’s entire presidency.

Based on Janet Yellen’s virtual confirmation hearing before the Senate Finance Committee, we can only expect more of the same failed policies that kept the economy at a low simmer during the Obama years. In her remarkable testimony, she urged lawmakers to “act big” on spending now and worry about the debt later.

This cavalier attitude toward debt is unhealthy for anyone in Washington, especially a Treasury Secretary. If the stimulus package is implemented, we could be on track to surpass $30 trillion in federal debt while President Biden is in office. Treasury debt is on track to reach 108 percent of U.S. gross domestic product (GDP).

Now Janet Yellen—the person responsible for making sure America’s bills get paid—is telling us that spending trillions of dollars in new debt is a problem for tomorrow’s America, not today’s America. Does this feel wrong to anybody else?

Yellen hasn’t shied away from raising the minimum wage to $15 nationwide, which would put additional hardship on small businesses already hurting from the pandemic shutdowns. The Congressional Budget Office estimates a national $15 minimum wage would destroy 3.7 million jobs. Perhaps Yellen will argue for yet another stimulus package then, too.

We cannot spend our way to economic growth. Stimulus spending has never worked, and every time it has been tried, Democrats dismiss the failure by claiming we just didn’t spend enough—as if federal spending has ever decreased from year to year.

Stimulus spending is a Band-Aid in the short term and the world’s lamest consolation prize for those who find themselves in the collateral damage of interventionist economic policies. Ask a restaurant owner who closed their doors in 2020 whether they’d rather have a $1,400 check or their restaurant back. There is no stimulus more effective than getting people back to work.

If the Biden administration wants to fire up the economy, it won’t write a blank check from future generations—it will encourage states to reopen. Instead of giving money away indiscriminately, consider not taxing it away in the first place.

But first, consider a replacement for Janet Yellen.