Coronavirus Stimulus Would Barely Cover Medicare for All

Sally C. Pipes
|
Posted: Jun 10, 2020 11:43 AM
Share   Tweet
The opinions expressed by columnists are their own and do not necessarily represent the views of Townhall.com. 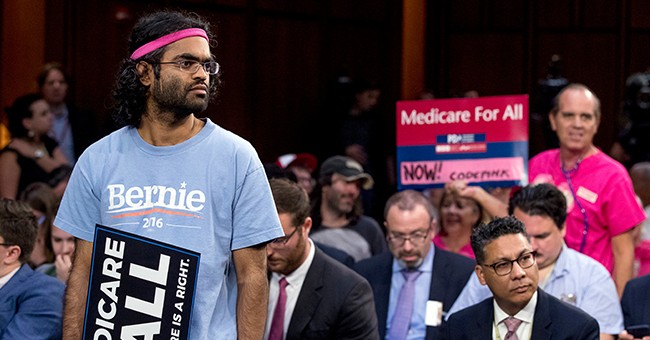 The economic crisis caused by the coronavirus pandemic has prompted the biggest spending spree in American history. The House of Representatives just passed an additional relief package worth $3 trillion. That's on top of $2.2 trillion in spending that Congress and the president green-lit in March -- including $250 billion in expanded unemployment benefits, $300 billion in checks sent directly to individuals, and $150 billion for healthcare providers.

These are massive amounts of money. That historic $2.2 trillion figure is more than half of what the feds expect to collect in taxes this year. It's also roughly half what the federal government would spend on just one year of Medicare for All.

In other words, Medicare for All would command the kind of spending historically associated with once-in-a-generation economic crises each and every year.

Unfortunately, such comparisons are still necessary. Senator Bernie Sanders's presidential campaign may have failed, but more than half of voters still support his plan for a government takeover of health insurance.

Medicare for All would eliminate private insurance and enroll every American in a government-run plan. These plans would cover everything from checkups and surgeries to dental and long-term care, free of charge. Patients wouldn't face premiums, deductibles, or copays.

Of course, this "free" health care would come with a hefty price tag. Estimates of the 10-year cost of Medicare for All range from about $28 trillion to some $46 trillion.

Not even Medicare for All's supporters have a plan to pay for the program. Sanders has proposed a series of taxes that would generate $17.5 trillion, less than half of the plan's total cost. Even doubling all individual and corporate tax receipts wouldn't generate enough money to cover the cost of Medicare for All.

The plan would trigger an economic crisis of its own by upending the healthcare sector, which accounts for nearly one-fifth of the economy and one of the nation's largest employers. Insurance agents, hospital administrators, and more would be among the more than 2 million people would find themselves out of work practically overnight.

This disruption would make it harder for patients to access care. Medicare for All would reduce hospital revenues by around $150 billion. That would put the futures of many hospitals in jeopardy, especially those in small, rural areas, whose margins are already thin. Over 100 rural hospitals closed their doors in the past decade, and 25 percent remain at high risk of closure.

Medicare for All would also deliver significant pay cuts to doctors. The plan envisions paying doctors at Medicare's existing rates, which are projected to be 40 percent lower than those paid by private insurance, according to the Mercatus Center's Charles Blahous.

Those pay cuts could exacerbate the country's looming doctor shortage. Based on current trends, the United States will be short 120,000 doctors by 2032, according to the Association of American Medical Colleges. If aging doctors were to respond to Medicare for All's lower pay by retiring early, or if lower compensation discourages young people from entering the profession, then that number could be even higher.

The COVID-19 outbreak has destroyed trillions of dollars in wealth and saddled future taxpayers with trillions more in obligations. One can only hope that the pandemic will end up being a once-in-a-lifetime event. Medicare for All would bring this kind of financial destruction to the economy and patients each and every year.