Salena Zito
|
Posted: Jan 29, 2019 12:01 AM
Share   Tweet
The opinions expressed by columnists are their own and do not necessarily represent the views of Townhall.com. 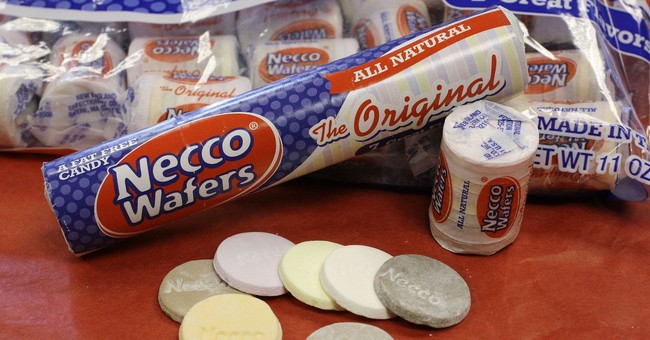 BRYAN, Ohio -- When the New England Confectionery Co. filed for bankruptcy in Boston last spring, there was such an immediate and deep sense of loss across the country that folks took to local stores and Amazon to claim a piece of yet another what-used-to-be.

Necco Wafers, its signature product, had been part of Americana since before the Civil War. In fact, the company said the sugary, chalky wafers were a favorite of soldiers because the confection didn't melt, and that they were consumed by Union soldiers on the battlefield during the Civil War and by GIs during World War II.

Any Catholic kid of the '60s will tell you it was their parish's practice wafer for the least holy, most worldly part of preparation for first Holy Communion. I never liked them (my dad adores them, in particular the licorice flavor). When I asked Sister Leo if I could pass on the wafer, she allowed it, but only after a lecture in which she said, "You are not going to like the taste of the communion wafer much either, but you don't get to pass on that."

Go on Amazon today and some price points for a bag of Necco Wafers are nearly $60. Why? My guess is the nostalgia they evoke in us about simpler or happier times in our lives or our communities.

Even if in those times, everything around us was, in truth, chaotic, challenging or even awful. Maybe having that wafer reminds of respites we could find.

Nostalgia is a complicated emotion. Initially it raises our endorphins as we flash back and momentarily relive those times. But it also evokes a deep sense of loss because those times and experiences will likely never return. We are completely powerless to change that, and we know it.

Many professionals who live in larger cities and communities and have made the decision to embrace our current culture of dramatic and rapid change with gusto face a complication, their refusal to listen to the people who sometimes want the world to slow down. To them, nostalgia often simply means racism. To many others, though, nostalgia means seeking something that was lost.

The more cosmopolitan class -- caught up, living and enjoying societal and political upheaval -- too often views those who aren't on board -- or who are more nostalgic for a more personally connected society -- as less intelligent, backward, bigoted or too tied to the tenets of their faith. These views are not new to the Trump era. They have been building for years and went largely unnoticed -- until their class lost a presidential election in 2016.

Why this rejection? The list of reasons is long. In his riveting and important new book, "Alienated America," my Washington Examiner editor, Tim Carney, explores those deeper reasons and unearths the true losses that lie inside that nostalgia.

What cosmopolitan critics have gotten wrong about nostalgia since this populism began is the assumption that it is rooted in racism. They firmly believed then, as they do now, that "Make America Great Again" is code for something nefarious.

Yes, some who were rallied by the MAGA promise were motivated by prejudice and vice -- every political movement has its bad travelers. But ask President Trump's earliest supporters and most of them would share a vision of making America great again by rooting it in a wholesome, inclusive vision of the American dream, a dream that was dead or dying for voters in blue-collar communities.

What Carney gets right is that our betters ignored the root of America's angst. Some focused on purely economic decline, but the people living it knew it was cultural collapse. Carney's book digs deeply into that collapse and outlines the decline of America's blue-collar communities, religious institutions and civic institutions that is fraying their bond to one another.

Nostalgia is a big part of America's commerce. It plays a role in fashion and furniture. There is a reason we search for vintage clothing -- many spend hours at flea markets or antique stores -- and why top-line courtiers look backward for retro designs.

It seems that half of eBay's products are for people looking for something that embodies a time that was.

And sometimes collective nostalgia has power. Here in this northwest Ohio town, 65 miles southwest of Toledo, the Spangler Candy Co., a fairly joyful candy company to visit and home to Dum Dum lollipops, has bought Necco Wafers and Sweethearts and will begin producing them sometime this year.