Amid a Nationwide Opioid Scourge, There's a Little Hope in a Small Town

Salena Zito
|
Posted: Mar 27, 2018 12:01 AM
Share   Tweet
The opinions expressed by columnists are their own and do not necessarily represent the views of Townhall.com. 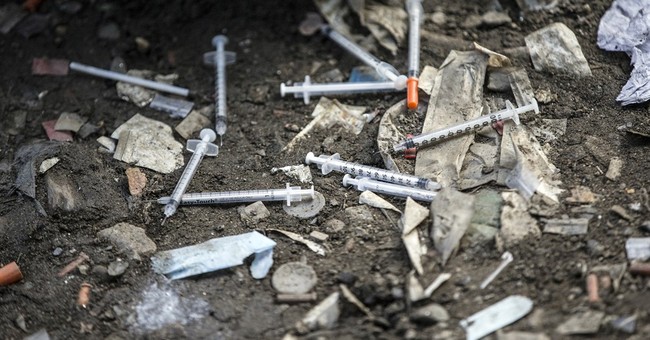 EAST LIVERPOOL, Ohio -- Kellyanne Conway, counselor to the president, and John Lane, chief of police of this small town in Columbiana County, have more in common than you'd think.

Both believe that the fight against opioid addiction will require faith-based ministries that can work through peer-to-peer programs, which connect former addicts with current ones. This scourge has ripped through the country.

In an interview with me the day after President Donald Trump unveiled his plan to combat the country's opioid epidemic in New Hampshire, Conway said: "It's like anything else. When you look at something, you say, 'Do I like it, and is it like me?' When it's peer to peer, that really is the key. First of all, it reduces the stigma and the fear people have about 'How do we even get started? Who will judge me? Will someone arrest me?'"

Chief Lane is on the same page. His town of East Liverpool became the poster child of the opioid scourge thanks to his decision in 2016 to post a photo of two adults overdosed and slumped over in the front seats of a car with a 4-year-old boy in a dinosaur T-shirt looking on from the back seat. The world stopped in its tracks at the raw human loss in that photo. It's exactly why Lane decided to post it.

"It was in that moment that the child stopped becoming the center of that family's world, and drugs replaced that love and caring they were supposed to give him," said Lane.

It was shocking for the rest of the country, which was not used to seeing something Lane sees every day, sometimes several times a day. The hopelessness captured in that photo echoed across the country as hundreds of other cities, towns, suburbs and rural expanses saw themselves, or family members or neighbors, in it.

Lane credits the peer-to-peer efforts of Family Care Ministries, a faith-based nonprofit organization whose mission is to help people with addictions.

Conway said: "The peer to peer is so incredibly important. There are faith-based organizations that I've met with across the country where they've been doing incredible work for decades, so they're not new."

She added: "This kind of crisis is new. We've always had, obviously, a drug problem in this country for many, many decades, but these faith-based organizations, they've been equipped to deal with different circumstances. They're already there on the front lines, and they're trying to respond to this crisis thusly."

She said yes, it is incredible to have the juice of president, the White House and the first lady behind the effort. "But we still respect and herald, really, the fact that those who are closest to the people in need know how best to administer to those needs," she said. "So it's going to be at the local and community level where the health professionals, the law enforcement, the faith-based organizations, certainly the elected officials, the opinion leaders, the schools, the grieving families, the great stories of triumph where people have gone through drug treatment, and indeed recovery, can come forward and talk about it."

The plan to end the opioid epidemic Trump laid out last Monday includes improved access to treatment, a public awareness campaign aimed mostly at youth and, of course, a wall between the United States and Mexico to stem the flow of illegal drugs made south of the border.

Trump was strident in his call to end the menace of drug addiction in America. He said: "if we don't get tough on the drug dealers, we're wasting our time. ... And that toughness includes the death penalty. ... We have got to get tough. This isn't about nice anymore."

"A lot of folks have talked about the president calling for the death penalty," Conway said. "That is for some high-level drug traffickers, according to the Department of Justice's jurisdiction and discretion."

Currently, traffickers can bring in massively lethal doses of the synthetic drug fentanyl and not face significant sentences. "What the president is saying," Conway explained, "is it makes absolutely no sense that you have people coming with fentanyl. You need a trace amount of fentanyl to kill one person."

Conway said: "Attorney General Sessions has done yeoman's work on shutting down parts of the dark web where people are buying opioids, on disrupting the illegal flow of these illicit opioids that are being synthetically created in labs in China, we're told, coming through Mexico, and also just backing the blue to make sure that our first responders know they have the resources and the support that they need."

Lane tells the story of a local man who watched his best friend overdose on heroin and, instead of calling the paramedics to get him help, first robbed him so he could buy himself some heroin. Lane said: "He forgot how to be a person. He only knew how to be an addict.

Both Lane and Conway want the same thing: a road to hope. Both agree that a big answer has to be made up of many smaller ones, such as the peer-to-peer and faith-based programs that can fly under the radar but are having an impact.

One year ago, it wasn't unheard of for there to be several overdoes in East Liverpool in just a handful of hours. Lane credits the city's See Something, Say Something campaign and its work with Family Care Ministries: "When people realize there is hope and the person sitting across from them has been where they are, it makes a difference. There is not much more you can add to that."