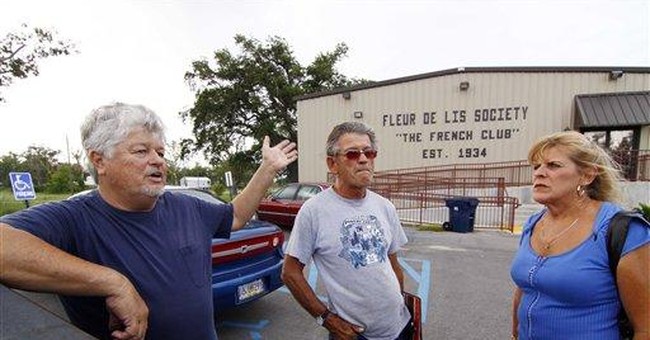 CANTON, Ohio-Rudy is the quintessential average white guy, right down to his last name. "It literally is Guy," he said, laughing at the irony.

Born in New Eagle and raised in Charleroi in Pennsylvania's Monongahela Valley, Guy comes from a long line of Democrats. "My grandfather worked at Corning Glass, my father worked in the mines, the steel mill and finally at Corning," he recalled. "The family always had union ties, and that usually meant a tie to the Democratic Party."

That's no longer true for him, however: "As my life started to improve financially, I realized that unions seemed to be damaging the economy and Democrat legislation always seemed to impact my wallet."

Guy lives in a Canton suburb lively with soccer fields, businesses, car cruises and recycling programs. He has a blended family of six daughters and one son; his wife, Cheryl, is a nurse and a registered Democrat.

His story is not much different than that of those West Virginia Democrats who protest-voted for a convicted felon over a sitting president in last Tuesday's state primary.

The problem for President Barack Obama and down-ticket Democrats on November's ballot is that average white guys aren't just found in West Virginia; they're in Ohio, Pennsylvania, and other states, too, and they can tip this fall's election.

According to Gallup's latest battleground numbers, Obama's main electoral strengths are with voters who are nonwhite, nonreligious, single or postgraduates. Republican Mitt Romney's strength is with white voters, particularly men, those who are religious, and those who are 30 or older.

Romney leads Obama with white male and female voters and does significantly better among men, 59 percent to 32 percent.

Rudy Guy says Obama has lost his registered-Democrat wife's vote: "Cheryl and I pretty much see eye-to-eye on the Republican Party's legislation direction."

Some Democrats like to portray the GOP as a party of white, middle-class, married Christian men. Interestingly, the president, who ran as someone who would unite the nation, has disconnected with the next largest plurality in the electorate behind women - white guys, men who once were the backbone of the Democratic Party.

These are the men whose skills include fixing the wiring in your home, mining the coal that supplies 82 percent of Ohio's and 48 percent of Pennsylvania's electrical power, and running the small businesses that keep our communities (and other small businesses in them) rolling along.

They make the widgets and fix the computers we use, own the lawn-care companies that tend to our neighborhoods and schools, volunteer as our children's coaches, and attend church probably less often than they would like because of work or community commitments.

They are the sons, grandsons and great-grandsons of European immigrants whose commitment to work, family and God all held equal priority. College either was not an option or was skipped so that they could use their hands and their ingenuity to become gainfully employed.

Many also are employees of what today appears to be the next great economic frontier - the energy industry. Yet, oddly, they are ignored by Democrats, or used by the president to sell class warfare in his re-election campaign.

They did vote for him in 2008 - but the polls suggest they are not coming back this time.

The loss of the average white guy is why you see President Obama devoting so much effort on trying to encourage the college-educated young to vote, said Mark Rozell, political-science professor at George Mason University. "He needs to offset substantial losses among predominantly white, non-college-educated men who are a big component of those left behind by the struggling economy," Rozell explained.

And the quintessential example of that is Canton's Rudy Guy.

"It seems to me that Obama is intent on punishing anyone who is employed with a job over minimum wage," Guy said. "In the last three years, I've seen my spendable income drop, my cost for health-care insurance go up, and my benefits go down.

His answer is simple: "No."