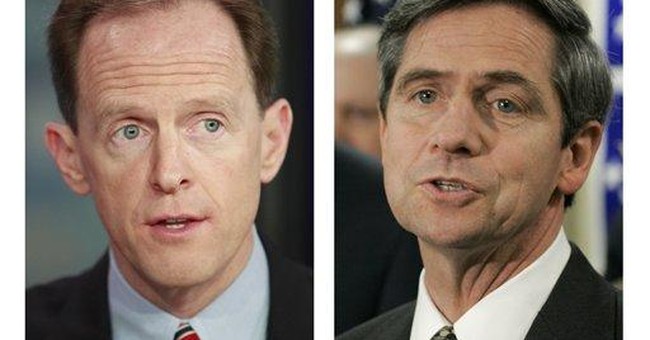 One year after his jump from Republican to Democrat, Pennsylvania’s U.S. Sen. Arlen Specter admitted to a reporter over coffee that he often wonders if he should have switched parties.

And therein lies the problem of Specter: He’s never understood that his own worst enemy has always been the man in the mirror.

It isn’t that he was a Republican who often crossed the Senate aisle to vote with Democrats, or that he switched from Democrat to Republican to Democrat. It’s that he is untrustworthy.

Politicians know you can survive the storm of emotions; a thin line exists between love and hate. But lose the voters’ trust, and you have lost their vote.

“Everybody stays around one season or one election too long, and that may be Specter’s fate,” says Purdue University political science professor Bert Rockman.

Specter’s campaign, state Democrats’ party apparatus and the national party have all done a feeble job of trying to marginalize U.S. Rep. Joe Sestak of Delaware County, his primary opponent, as a windmill-chasing political Don Quixote – although they have done a fantastic job of persuading potential fundraisers and campaign staffers that supporting Sestak could be career-ending.

Specter hasn’t trailed in any polls to date but a Rasmussen poll released two weeks ago showed Sestak pulling to within two points.

With Specter backed by the White House and by great big gobs of cash, conventional wisdom has Specter winning the May 18 primary.

Not necessarily so, says a Democratic strategist familiar with the campaign: “I have always believed that … this is Joe Sestak’s race to lose.”

The key to a Sestak primary victory has always been to become recognized by rank-and-file Democrats as a legitimate, viable, principled alternative to incumbent Specter.

“While the Sestak campaign has been slow to do this, it is now picking up the necessary steam with (its) acceleration of the campaign-ad wars,” says Keystone College political science professor Jeff Brauer.

Brauer says Sestak can successfully use Specter’s own strategy against him, “by pinning him down as a turncoat and political opportunist, linking his longevity to all the current economic woes, and pressing his responsibility for them.”

For good measure, he can also push Specter’s hyper-political-elite status. In an election such as this one, in which outsiders are favored over insiders, that message would stick – especially among deflated Democrats who aren’t exactly thrilled with the “Hope” and “Change” they bought into in the 2008 election.

If Sestak sells himself as the Democrats’ real alternative, and one who is not beholden to the party apparatus or leadership, Brauer believes he will pitch the perfect message to target rank-and-file Democrats in this election cycle.

“All elections are about turnout,” he explains. “In non-presidential primaries, turnout is about super-voters – those party members that faithfully vote in every election.”

In yet another advantage for Sestak, super-voters in Pennsylvania mean larger numbers of women and seniors, both of which are high on anti-Washington sentiment.

It’s an advantage to have the party apparatus behind you in a tough race, but not in Arlen Specter’s case in 2010.

Specter has never been able to get the electorate excited about voting for him, says Brauer. “Instead, he has always relied on turning the electorate against his opponents by smearing their records.”

He is at it again, trying to smear Sestak with “Swift-boat”-type ads that question Sestak’s military record.

As a recently-turned Democrat, Specter needs to get more than the party elite behind him; he needs to convince rank-and-file Democrats that he is truly one of them. With the current mood of the state and country, he needs to separate himself from the political elite in Harrisburg and Washington.

Yet he has been unable to energize his base and has solidified himself as the quintessential political elitist, owing his candidacy to state and national party leaders and their promise of support if he switched parties.

This failure was very evident a week ago at a free rally at Scranton’s airport, where Vice President Joe Biden stumped for him, says Brauer. “While there were an abundance of local, state, and national political elite making appearances, the general-admission crowd was embarrassingly small.”

Specter now has deep disadvantages, according to Rockman: “He’s old, he’s been around the race track too often, and he’s not in great health. It’s a year of ‘throw the bums out,’ especially if they’ve been around a long time.”

He and Brauer agree that Sestak may well emerge as the candidate more appealing to most Democrats and, above all, as more likely to win for them in November.