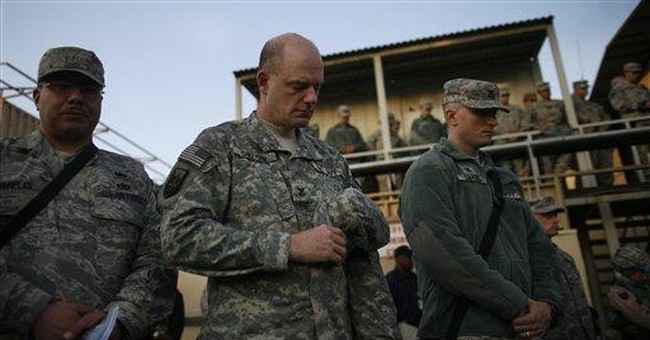 The 2008 national election clearly shows our next generation of leaders must possess something that many recent and current elected officials lack: intellectual courage.

President Nixon believed all leaders, regardless of their time, needed “brains, guts and heart.” Others have defined those character traits as “the right stuff.”

“Given what is likely needed to right our ship of state, I don't think that it will come as a great surprise to many that our current men and women in the military are likely going to be the ‘right’ individuals for the job when they come home,” said Lara Brown, a Villanova University political science professor.

What is equally self-evident is that women have an opportunity to step into leadership.

“As the country looks towards the future, this is the most fertile season for women as a new generation of leaders,” Democratic strategist and CNN contributor Donna Brazile predicts.

Brazile believes women as decision-makers tend to be more pragmatic and less ideological, adding: “The same can be said of the men and women returning from military service.”

“A man or woman with a military background has, usually, a better sense of self and of purpose,” said Mark Davidson, a former member of the Clinton administration and a Navy Reserve captain. “While certainly there are those who would do anything to win … this generation of service members tends to be less dogmatic and strident.”

Women and military veterans always have been critical to our nation’s success, yet their numbers are anemic in today’s U.S. House and Senate.

The number of women in Congress, despite having a female House Speaker, is equally lackluster: 76 in the House, 17 in the Senate.

Given the impasse in our government, future elected officials need to be less ideological and more practical – that is, philosophically open to employing strategies or policies that are likely to work and not just likely to earn points with one's political base.

U.S. Reps. Patrick Murphy, D-Pa., and Tom Rooney, R-Fla., are part of the new generation of veterans who have taken their service skills to Washington.

Rooney, who was in Murphy’s wedding, said both men can put party affiliation aside when making legislative decisions because they were trained to put country first.

“I joke that when I am getting beat up from both the left and the right, I am making the right decisions,” Murphy said.

Both agree that their military training guides them. “Politics always stops at the water’s edge,” Murphy said. “Actions speak.”

And both want to see more veterans elected to Congress.

“As far as women in leadership go, well, without my wife’s skills in juggling everything, I would have never been elected,” Rooney said.

We have a long history of veterans serving in the country’s highest office, from George Washington to Andrew Jackson to William McKinley (who once said he thought "major" was the only title he ever earned, despite being a congressman, governor and president), Theodore Roosevelt to Dwight Eisenhower, and others.

Women have made their mark for years. Between Hillary Clinton's serious run for the presidency and, now, Sarah Palin's entrance onto the national stage, it is difficult to say the door to the White House has not already been kicked open by them.

While neither woman was successful, few Americans still believe women are unqualified to be president. They may not like Hillary or Sarah, but they would find it tough to rule out women as a group.

Yet as long as mainstream-media such as Newsweek fail to see the sexist editorial choices of their cover and inside photos of Palin, women will find more and more common ground over which to unite.

One need look no further than political-battleground Pennsylvania to see potentially another "year of the woman" brewing.

After this month's statewide election, most commentators noted that Republicans did better than Democrats in a state Obama won by double digits – but most failed to note that Republican women far outdid their male counterparts.