What’s School Bullying Got to do with Our Politics and Cancel Culture?

Ryan Shucard
|
Posted: Feb 11, 2022 12:01 AM
Share   Tweet
The opinions expressed by columnists are their own and do not necessarily represent the views of Townhall.com. 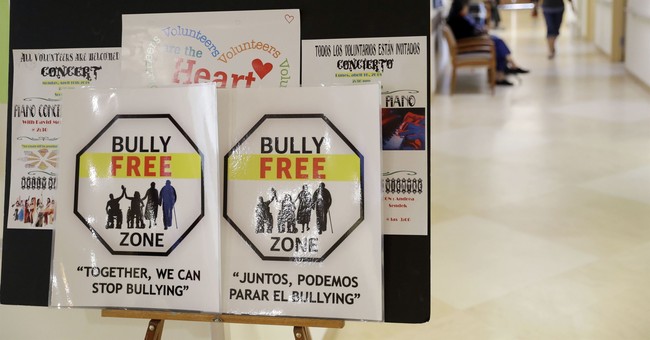 China launched a cyber attack against a major American media institution. Russia is amassing troops on Ukraine’s border. Hundreds of thousands of people illegally cross America’s southern border and nearly 44,000 bridges across our country are deemed structurally deficient. That’s just a smattering of the serious issues facing our country while we continue fumbling our way through the pandemic unleashed by China.

Considering all that, why would we take the time to opine about bullying and complaining about how more needs to be done, yada-yada? Fair question. I thought the same. Is bullying, especially cyberbullying, really an issue worthy of our national attention, and right now?

In short, yes, but it’s not about a conceptual framework or some sort of federal program backed by more taxpayer dollars. Taking on bullying in today’s America is about two things: understanding its connection to the American ethos of personal responsibility and self-reliance, and acknowledging that only individual action will curtail bullying, not government.

Take a look around, bullying is everywhere. Look at the online trolls on social media. That’s bullying. Look it up in the dictionary and it's foolish to dispute. Trolling online, even a public figure is still a form of bullying. Our culture now says this is acceptable because we enter with the pretext that we’re less powerful than the accounts we troll. We justify it because we’ve been trained by Big Tech to accept the premise that merely existing on a platform assumes the acceptance of trolling as our only recourse.

That's the problem and it’s a direct derivative of unchecked bullying. Adults do this routinely. Politicians do it as a matter of daily course. Kids see it and think it’s permissible, a way of being in the world. From there it metastasizes into higher forms of abuse, addiction, manipulation, and any array of mental health issues for both the victims and victimizers. Then the idiots on cable news pontificate wondering why schools are attacked and why phobias and prejudices are seemingly worse amid the burgeoning woke era.

Charles Krauthammer said it best, “Politics is the crooked timber of our communal lives, dominates everything because, in the end, everything - high and low and, most especially, high - lives or dies by politics. You can have the most advanced and efflorescent of cultures. Get your politics wrong, and everything stands to be swept away.”

This has led to the pervasiveness of cancel culture, the venom of unchecked bullying. Cancel culture is all about attrition and the reassertion of perceived powerlessness. Those who cancel assume the identity of victims as a way to justify the victimization of their perceived oppressor(s). No matter the offense, canceling someone or a group of people is undoubtedly bullying. It is unrestrained, unreasoned, and intended coercion. In today’s America, it’s used as a way to harm those who don’t agree with our political views.

What we thought of as the immovable structures of decency and kindness are being swept away. Unique anti-bullying organizations are resisting this slide in an effort to bring back both elements in our young people by inspiring over 7,000 of them to publicly apologize for bullying and related behaviors like racism through a “courage to be kind” programmatic approach.

These are the real doers infusing the pillars of America’s ethos back into schools and youth communities across the country and the globe. These people are addressing the root cause of bullying so that future generations will grow up to lead our society far better than this sheepish and ill-fated class of American adults.

Today’s adults are directly to blame. We are so void of our own personal responsibility that we allow our kids to do the same no matter if they're the oppressed or the oppressor. We allow them to subjugate others, isolate themselves in fantasy worlds of gaming and the metaverse, strengthening their identity of victimhood which guides the rest of their lives. If you want to talk about the softness of America and our culture then the rubber meets the road with bullying and how we respond to it.

We get a high from the bravado of talking tough about meeting and defeating terrorism but as Paul Coughlin, an expert witness regarding bullying and the law, and founder of The Protectors, a faith-based anti-bullying organization wrote, “Terrorists aren’t the only villains who use violent acts to create fear in part by targeting innocent, non-combatants. Bullies do so every school day in America… [and] wed power to fear and target innocent classmates, except bullies do so to gain social status as terrorists strive to usurp political power.”

Bullying will always rear its ugly head. The problem is bullying’s pervasive nature and our anemic response to it. Letting it persist is like saying terrorism is permissible based on our levels of distraction or interest. This is illogical because the consequences at inflection points are far more serious than when issues are addressed immediately.

Though America’s elite ruling class has plunged us into the absence of civility and common decency doesn’t mean we can’t arm our children with the tools to get things right - something Coughlin’s Protectors provide. After all, isn’t that the realization we’re supposed to come to after adulthood has set in? That we acknowledge our faults and wickedness, accept the passing points of no return, and work toward providing the purer among us a better chance.

Like the cancel culture warriors, bullies live to overwhelm, not persuade. But America has a proud history of producing more good, strong and loving people than bad seeds. Let’s launch a new era of 246 more years of standing up to bullying and purging our politics of its derivatives like cancel culture by raising responsible and confident kids.