Ryan Shucard
|
Posted: Aug 28, 2018 12:01 AM
Share   Tweet
The opinions expressed by columnists are their own and do not necessarily represent the views of Townhall.com. 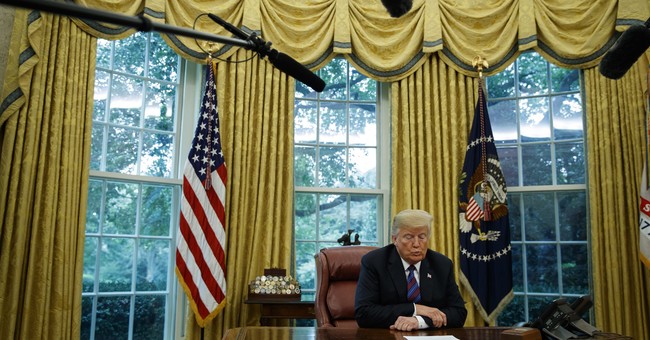 It’s no secret Washington’s elitists have largely built their influence by embracing transactionalism. You’ll find it everywhere. In both parties, on every campaign, within every committee, across bureaus and agencies to K Street and everywhere in between. It’s brazen, cutthroat, unfair, and effective. This pervasive mentality is the raw material for which power in Washington is manufactured.

Couple that with another age-old Washington maxim, “do as I say, not as I do”, and it’s easy to see why President Trump’s open display of transactionalism, especially abroad, is not only fueling his base, who see his actions as long overdue reforms that protect a too often cheated American working class, but also his most fervent opponents, from both parties, who view his presidency as too massive a deviation from well-established and broadly accepted norms.

Still, the president is seemingly immune, even detached, from the fallout of his provocations of America’s institutions and political niceties. He has fully embraced the role of a vilified change agent.

And while there is some merit to fighting fire with fire, just because the worst of Washington’s brand of transactionalism is on full display with President Trump, does not, altogether, make his approach the correct one in all instances. In fact, his election was largely predicated as a rebuke of all that Washington has become: an unintended and sad example of a dysfunctional and out-of-touch elitist class presiding over a powerful country they largely don’t understand.

But it is undeniable the president’s approach has yielded some unexpected results despite all the consternation he drums-up in the media.

For instance, while the media stirred over the president’s incendiary tweets regarding the commitment of NATO’s member countries, he retreated to backrooms for smooth-overs, pleasantries, and understanding. It is, by every other standard of diplomatic conduct, backward. Trump succeeded nonetheless.

While publicly praising shared values among nations, even those with adversarial tendencies, and acknowledging complicated and sometimes brutal histories, leaders of the world’s democracies are expected to exploit traditional channels and leave the tweets to the press shop. From there, some sharper conflict-accentuated dealings are to take place behind closed doors, leaving journos to fight for scraps of the scuttlebutt.

But President Trump prefers to air grievances in the public square, often agitating situations further so as to force negotiations and subsequent coverage. From there, he’ll attempt to fulfill his promises by walking away with “a deal.” This, I would argue, is only possible by the sheer force of his personality. This approach also allows better control of his messages to rally supporters while leaving just enough chaos and confusion to keep opponents and pundits guessing.

Negative impacts appear to be minimal. Take the Paris Agreement for example. Trump’s transactionalist justification to withdrawal from those accords only emboldened climate change believers, and several mayors of America’s largest cities to maintain their now voluntary participation in the agreement’s provisions. And dare I say that’s an interesting pivot away big government tendencies of today’s progressives in favor of municipality-focused modes of governance more commonly associated with conservativism.

Yet, there is still a corrosive element to the president’s brand of transactionalism that is likely to compound the problem of a too powerful executive branch. What’s worse is the American electorate’s increasing reliance on the executive to enact change instead of embracing the slogging distillation of the legislative process that has led to further strains court systems and fuels bitter partisan gridlock.

President Trump was an executive, so it should be expected he govern like one. But demanding loyalty from all and giving it to a few comes at a significant price. Many of his supporters wish he would tweet less, quit name-calling people of little consequence, and use his largess to talk about their issues.

As he said shortly after his first year in The Oval, “You have to govern with all of the instincts of a businessperson, but you have to add much more heart and soul into your decisions than you would ever have even thought of before."

He’s right, but much more heart is still required. And, as a successful businessperson, he should know well that boardroom actions are often forgotten and what is most remembered about an executive is their leadership – and more importantly, the health and longevity of their organizations after their departure.

President Trump, like Obama, has an incredible opportunity to rebalance the executive branch’s trajectory in American politics but it will likely require a self-inflicted deviation from the wholesale transactionalism the swamp creatures around him have been feeding on for years.