Ryan Shucard
|
Posted: Jun 12, 2018 12:01 AM
Share   Tweet
The opinions expressed by columnists are their own and do not necessarily represent the views of Townhall.com. 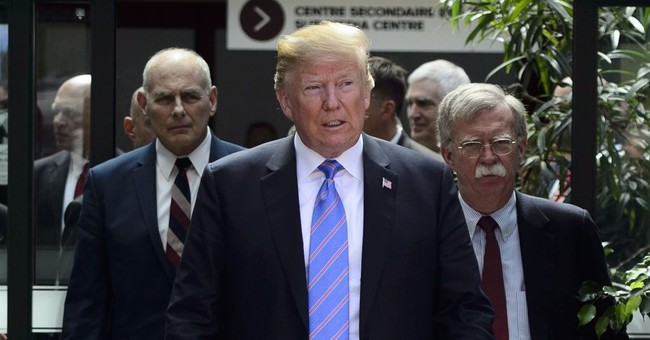 Seldom does the simple enforcement of the law provide us with an opportunity to both personalize the instance and tether it to one of the most visceral political debates with permanent residency in the exhaustingly predictable 24-hour news cycle. Of course, I’m talking about immigration and more specifically President Trump’s stance on illegal immigration and border security.

The president is not only credited with big plans and hot rhetoric but also with empowering law enforcement and setting the tone, now in nearly every top post of the federal government, to first and foremost: enforce America’s existing immigration laws.

That’s pretty much where reasonable and thoughtful debate ends and where the emotionally charged and morally outraged haters begin lobbing their nongermane attacks at the President and anyone who supports a version of his immigration policy.

Recently, I too, was forced to grapple with the hard realities surrounding the consequences of merely enforcing existing immigration law.

I live in an ultra-liberal city and have never heard of an illegal immigrant being caught and deported, let alone one I knew. In fact, I didn’t know he was here illegally at all - by way of overstaying a work visa.

I knew him as a fixture in the community. He had risen from a day laborer position sweeping floors at construction sites to midlevel skilled positions and eventually to super-intendant in-training. His English was perfect and aside from assisting in translation to other workers on-site, he was an effective communicator and manager.

He met a woman whom he eventually married. They recently had a baby girl and planned to begin looking for a fixer upper. In the minimal but pleasant interactions I had with him over the years, he was by all measures a normal guy pursuing the American dream by working hard and doing (almost) everything right.

Every reasonable American wants a man like that here and most of us would welcome him into our communities as one of our own, because after all, somewhere down the line, all of us came from somewhere else – at least that’s how the nonconfrontational folks in this town put it.

But, this man broke the rules. There’s no two ways about.

Now that word has spread among the people who knew and employed him, they’re outraged and maliciously fault President Trump with ruining a good man’s life and dividing his family.

For a split second I found myself buying this excuse to further dress up the facade of surprise and outrage. But taking note of the boujie crowd, some hard realities became instantaneously clear.

While people generally tend to blame lots of things on those at the very top, we live in a time where it is now commonplace and acceptable, almost second nature, to viciously criticize Trump for just about anything, short of the weather perhaps.

Yet, as every president does, Trump has set the tone for the federal government’s conduct with regards to enforcing existing immigration law, even if that’s incongruent to the views of some local and municipal governments. This, at the very least, should be seen by all political persuasions as an affirmation that the president is correctly executing the duties of his office.

If our elitist friends absolve our immigrant friend from responsibility, then who beyond he bears the brunt of the blame?

It’s certainly not the president and it’s not the people who voted for him, support him or work for him. If anything, they’re doing what they were hired to do.

Rather, blame for the sad reality of deporting a man who, by all accounts and at the very least be afforded some sort of discretion for reconsideration, should be placed squarely on current and former members of congress, from both parties, and frankly, their constituents for allowing a system to go unchecked, unbalanced, and underfunded for so long.

If we want to point the finger at someone, let us look in the mirror and give a good pointed expression at ourselves. Trump is symptomatic of a larger and prevailing problem in America: the utter refusal to take responsibility for decades of batting the serious issue of immigration, and many others, around like a shuttlecock during half-assed game of drunken backyard badminton.

To oppose the responsible execution of the most basic function of any government, to maintain its borders and the flow of people and goods to and from, is untenable. To routinely fail at creating the most advanced and secure system for legal immigration is unacceptable.

The angst surrounding to Trump’s stance on immigration, however unconventional his style, has more to do with his opponents’ unwillingness to accept their inactions and ineptitude have both broken-up a young family and paved the way for the rise of Trump.

Seldom does the American electorate deliver a character capable of bridging such a dangerous chasm, nor one able to endure the never-ending onslaught of criticism and attack.