When the Pro-abortion Left Attacks Adoption

Ryan Bomberger
|
Posted: Oct 08, 2020 10:24 AM
Share   Tweet
The opinions expressed by columnists are their own and do not necessarily represent the views of Townhall.com. 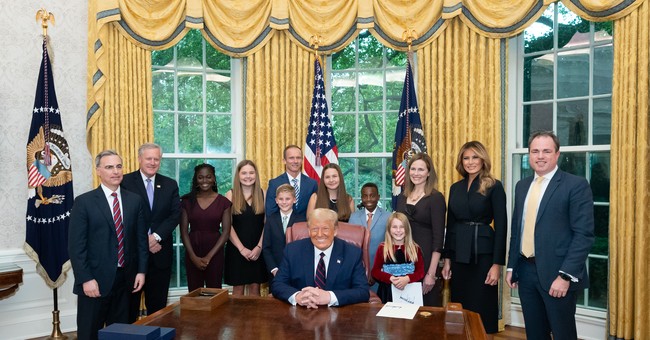 I’m completely biased. I’ll let you know that up front. It’s not an implicit bias; it’s an explicit bias.

I wouldn’t be who I am without adoption. I may not even be alive today had my birthmom not chosen to be stronger than abortion. Though I was conceived in rape, I was adopted in love. So I’ll defend this loving act of justice with everything I am. As an adoptive father (two of my kiddos were adopted), I understand it in a way most don’t, especially the ones demonizing it.

Boston University Professor and everything-is-racist author, Ibram X. Kendi, decided to attack Judge Amy Coney Barrett because she committed a cardinal sin against the self-proclaimed “antiracist.” She selflessly engaged in one of the most powerful acts of racial reconciliation—bringing children of a different “race” into her heart and home and loving them because they deserve to be loved. What kind of world is “antiracist” when we’re only permitted to love those, as family members, with the same blood and same hue of skin?

In Virginia my marriage would’ve been illegal a few decades ago. But “progressives,” ever since my wife and I stepped into the public spotlight with The Radiance Foundation, have constantly derided me as not being “black enough” because my wife is white. (Funny, someone should’ve let Frederick Douglass know that his second wife, who was white, cancelled his “blackness.”) Isn’t this what so many fought and died for? To be seen as equal and to love one another regardless of the hue of our skin? Loving vs. Virginia ended those racist anti-miscegenation laws, but apparently many “antiracist” leftists want to dictate, with blatant racism, what are acceptable family relationships.

Would Kendi have said any of this if Judge Barrett and her husband were black? The attackers wouldn’t dare challenge the motivation for adoption or the “circumstances” surrounding it. Kendi tweeted this bile: “Some White colonizers ‘adopted’ Black children. They ‘civilized’ these ‘savage’ children in the ‘superior’ ways of White people, while using them as props in their lifelong pictures of denial, while cutting the biological parents of these children out of the picture of humanity.” Hateful and clueless.

I guess we’re all props in this family photo.

Kendi goes on to accuse white people of having a “savior complex.”

My parents adopted 10 children, nine of us black or “biracial.” They didn’t have a savior complex. They had a love reflex. And that love was born out of pain and brokenness. My mom grew up in a trailer home with an alcoholic father. At the age of 5, her parents separated and placed her into a children’s home for one year. It was a devastating time for a 5 year old. I guess she was “privileged” to experience such loss. It was there that her heart for adoption was sparked and her passion to love the “unwanted” changed her life—and countless others’—forever.

Let’s talk about the racialization of adoption. It didn’t start with naive Kendi (who, by the way, hasn’t adopted any black children but can only vilify white people who do). Never mind extensive longitudinal studies confirm that transracial adoption is overwhelmingly a positive experience for the adoptee. In 1972, the National Association of Black Social Workers (NABSW) issued a despicable racist decree regarding the placement of black children in white families. The manifesto claimed, in part: “The National Association of Black Social Workers has taken a vehement stand against the placement of black children in white homes for any reason. We affirm the inviolable position of black children in black families where they belong physically, psychologically and culturally in order that they receive the total sense of themselves and develop a sound projection of their future.”

People don’t own others simply because of the color of their skin. That’s called slavery.

That NABSW decree has led to repeated failures of kinship care (a form of foster care that keeps children with next of kin instead of placing for adoption), according to a 2008 Government Accountability Office Report. It has increased the time that black children, particularly, languish in foster care. What’s been preserved then? What cultural element is more important than a child being loved by a mom and dad and having permanence? I can guarantee you no child waiting to be adopted out of foster care is holding on to some of those extra months so they can have a skin-color match.

Planned Parenthood demonizes adoption for profit. When moms and dads choose to parent their child, or make an adoption plan, that brings in zero revenue for the $2 billion abortion giant. In a “Tool for Educators” factsheet, the leading abortion chain had this to say about adoption: “The psychological responses to abortion are far less serious than those experienced by women bringing their unwanted pregnancy to term and relinquishing the child for adoption.” Ka-ching!

The ACLU and Lambda Legal are actively trying to shut down faith-based adoption agencies. (There’s nothing quite like two radically pro-abortion groups feigning to care about any child who’s escaped the violence of abortion.) They’ve succeeded in their anti-adoption efforts in numerous places across the country. Catholic Charities was shut down in Boston, Illinois, and Philadelphia by these LGBT activist groups. In New York, these special interest groups are working to force New Hope Family Services to close for their “radical” practice of placing vulnerable children with a married mother and father. Alliance Defending Freedom is fighting to keep kids first.

The pro-abortion Left constantly demonizes adoption. That same political force is falsely casting pro-lifers (like my brown self) as racists, white evangelicals and Catholics as white supremacists who are privileged and fragile, and “transracially” adopted children as victims. The only fragility that matters is that of vulnerable children who need the rescue that foster care can temporarily offer or the love that adoption can bring for a lifetime.