Ryan Bomberger
|
Posted: Jul 01, 2016 12:01 AM
Share   Tweet
The opinions expressed by columnists are their own and do not necessarily represent the views of Townhall.com. 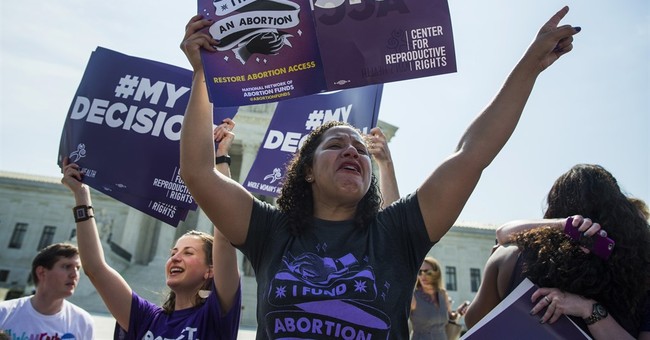 Maybe it’s the robes that give five people the misimpression that they’re magicians. Who needs the Constitution when a handful of supremely powerful justices can magically create their own laws, conjuring up legislation in the guise of a judgment? In Whole Woman’s Health versus Hellerstedt, Justice Breyer invokes the word “Constitution” 103 times (in one form or another) in the majority opinion yet completely ignores the founding document in this ruling that protects Gosnells around the country.

Roe v. Wade started as a lie in Bryan/College Station in Texas. In order to challenge the state’s law protecting unborn human life, Norma McCorvey (aka Roe) lied about being gang-raped. She actually ended up making a loving plan of adoption for her daughter. Lies shape legislation. And our liberal Supreme Court has no problem contributing its own falsehoods in defending a right that exists nowhere in the Law of the Land. I would love to know where, exactly, the words allowing someone to kill another innocent human being reside in the Constitution.

They don't. So supremely arrogant justices make it up with phrases like “right to privacy” and “reliance” (as in women rely on abortion to be equal) and now, “undue burden” that replace the Constitution with judicial (im)moral relativism. Facts and human lives be damned. Texas’ HB2 law was passed in direct response to the arrest and conviction of murderer/abortionist Kermit Gosnell. His squalid “House of Horrors” was the result of unenforcement of existing laws and non-existence of regulations requiring abortion mills to operate with the standards of real medical facilities. Texas moved to protect women. The Supreme court moved to protect the predators.

HB2’s requirement of hospital admitting privileges and ambulatory building standards came directly from the Gosnell Grand Jury report’s recommendations: “If oversight agencies expect to prevent future Dr. Gosnells, they must find the fortitude to enact and enforce the necessary regulations. Rules must be more than words on paper. We recommend that the Pennsylvania Department of Health plug the hole it has created for abortion clinics. They should be explicitly regulated as ambulatory surgical facilities, so that they are inspected annually and held to the same standards as all other outpatient procedure centers.”

HB2 also followed the exact wording of the unconstitutional Roe decision which stated, unambiguously: "...a State may regulate the abortion procedure to the extent that the regulation reasonably relates to the preservation and protection of maternal health."

So, what was pro-abortion Justice Breyer’s response? “Both the admitting-privileges and the surgical-center requirements place a substantial obstacle in the path of women seeking a previability abortion, constitute an undue burden on abortion access, and thus violate the Constitution.”

Not content with ignoring common sense, the left side of the Court explained why laws were not necessary: “Gosnell’s behavior was terribly wrong. But there is no reason to believe that an extra layer of regulation would have affected that behavior. Determined wrongdoers, already ignoring existing statutes and safety measures, are unlikely to be convinced to adopt safe practices by a new overlay of regulations.”

Well, there you have it. Minority women in Texas, the Supreme Court doesn’t care about protecting your health, just that abortionists can operate without any barriers. In Texas, the abortion rate is nearly 3 times higher among black women (22.7 per 1,000 women ages 15-44) than white women (8.1) and more than twice as high as Hispanics (10.1). (See this Radiance Foundation factsheet). There’s no lack of access to abortion in the Lone Star State. There are 34 Planned Parenthood abortion/abortion referral centers (in addition to other abortion mills) providing an extremely limited scope of “reproductive healthcare”. Their primary function is to generate revenue through abortion. That’s their money-maker, and they’ll spend millions of our tax dollars to defend it. But there are over 3,000 state-funded comprehensive real medical providers made possible through the Texas Women’s Health Program. This initiative delivers the full spectrum of reproductive medical care to even more low-income women now that the state has defunded billion-dollar Planned Parenthood. (Although, I’m no fan of oral contraceptives which have been shown to result in increased risk of triple-negative breast cancer, according to the National Cancer Institute. Depo-Provera, promoted heavily in the black community, more than doubles the risk of invasive breast cancer, too, according to this large-scale study. It also carries a major FDA warning about loss of bone mineral density, but I digress.)

Of the 61,912 abortions in Texas, 38.9% are among Hispanics, 27.4% among whites and 25.3% among blacks. The black community is the only demographic where its percentage of abortions exceeds its proportion of the population (11.5%). Pro-abortion activists claim it's because of poverty and lack of insurance. Nope. Hispanics have a higher poverty rate than blacks (25% versus 23%) yet have an abortion rate that's less than half the rate that occurs in the black community (10.1 per 1,000 versus 22.7 per 1,000). Hispanics are uninsured at higher rates, too, than blacks (27% versus 15%). Yet these same activists who claim that racism exists everywhere else in American life won't see the obvious racism in the one industry that has targeted, disproportionately, the black community with race-specific birth control initiatives (e.g. The Negro Project) and abortion. Have you seen the majority of Planned Parenthood's advertising?

Abortion, nationwide, is the leading killer of black lives (contrary to the factless assertions of the #BlackLivesMatter movement). Big Abortion snuffs out 317,547 unarmed black lives in the womb annually. This is more than all other causes of death—286,797—combined.

Minority communities, or any community for that matter, don’t need more deaths. They don't need the entertainment industry and Planned Parenthood promoting risky promiscuity. They don't need more policies of targeted population control (as thoroughly documented in the Amicus Brief that The Radiance Foundation provided extensive research for in order to support Texas' HB2). They need life-affirming resources that value every human being—not wealthy abortion hucksters given license, by supremely wrong justices, to operate their own “House of Horrors”.