This Easter Ask Yourself: What Would a (ProChoice) Jesus Do 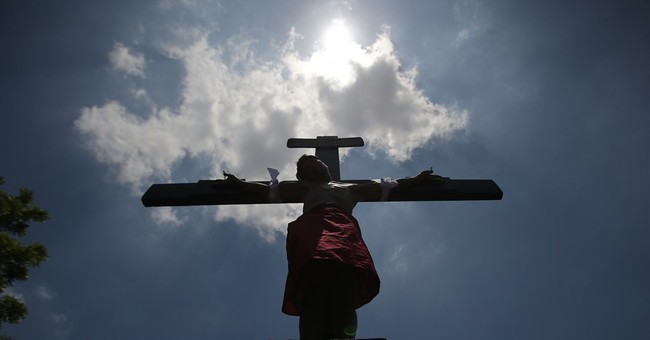 Sometimes we achieve clarity when we put an ideology into a different context. Our news media superficially celebrates those who fight for “equality” while denying it to millions through the violence of abortion. They go all Lady Gaga over someone who will stand for a whopping 11 hours to demand the death of innocent human life. Christ endured real torture including having his fleshed ripped from his back and being hung on a cross; I’m pretty sure it was more physically tasking than standing in place in comfy pink sneakers. The difference? His sacrifice was so others wouldn’t perish.

But what if Jesus were to have embraced a “prochoice” worldview? What would that look like?

We could kiss salvation goodbye. Adoption is at the heart of our soul’s redemption, yet it is a maligned consideration on the “prochoice” periphery. (Planned Parenthood aborts over 149 children for every 1 adoption referral). In addition, considering 51% of pregnancy in the U.S. are “unintended”, more than half of us would immediately be written off as unwanted, therefore disposable, and certainly not worth eternally saving.

A “prochoice” Jesus would be the ultimate hypocrite having his own life spared from a single teenage mother scenario only to condemn to death others in similar circumstances. He, like the Jesse Jacksons of the world (who was conceived in rape like I was), would enjoy the grand possibility of life while others the grim inevitability of undeserved death.

A Savior who espouses the tenets of the “prochoice” faith would not have to reveal the power of miracles, but instead rely upon a pessimistic outlook that misery is the natural outcome of physical affliction. Healing the blind, the lame, and lepers would only take valuable time and resources away from those who weren’t a “burden” on society. He would relish in His efforts to eliminate the “unfit” from the overpopulated world upon which He apparently miscalculated.

A Christ that embraced abortion dogma would be far less compassionate. That love would be conditional, dependent upon someone’s assigned worth. Those deemed “unwanted” or “undesirable” would automatically be assumed to be unlovable. He would preach to the multitudes that they should treat others how they would like to be treated, unless the others were worthless and their removal improved your bottom line or cleared up your future schedule.

Those who sinned and deeply desired redemption would be told that they should, instead, consider how they feel. Did it feel good to lust after someone else’s wife? Did your natural tendency to suppress self-restraint gratify you? Did you feel limited in a monogamous marital relationship that, in turn, forced you to discover your true femininity in sexual exploration? The woman caught and accused of adultery, would not have been spared from stoning because there were no men (including the adulterous ones) without sin, but because there was no sin to speak of. Christ the ProChoicer would’ve given her partially accurate birth control advice, STD-prone prophylactics and an affirming lecture on how her sexual promiscuity was normal and healthy.

This is the time of year billions of people celebrate John 15:13, but a "pro-choice" Jesus would've prevented such selflessness. Narcissism is at the heart of abortion doctrine. His death and resurrection never would have happened; self-sacrifice is anathema to sacred abortion beliefs. Jesus would not have been seized from the Mount of Olives, because He would’ve chosen someone else to take his place. He had 12 disciples. Certainly one of them could’ve been sacrificed.

Instead we have a Messiah who cares about every human life from the moment of conception until natural death and beyond. He chose to be nailed to a cross, despite His innocence, and die so that we can be redeemed, no matter what we’ve done. We have a Savior who saves the most wretched, the most defenseless and the most broken. He emblazoned Purpose on our hearts from the moment we were conceived. In Christ we have compassion, grace, mercy, love, forgiveness, hope and possibility personified.

This Easter, look beyond the pastel colors, the overly-marketed secular rituals and the well-choreographed Sunday services into the simplicity of why the Resurrection is so meaningful and life-changing.

Know that you are loved unconditionally by the Author of Life, and celebrate the greatest miracle ever created: you.