Roy Spencer
|
Posted: May 30, 2017 1:05 PM
Share   Tweet
The opinions expressed by columnists are their own and do not necessarily represent the views of Townhall.com. 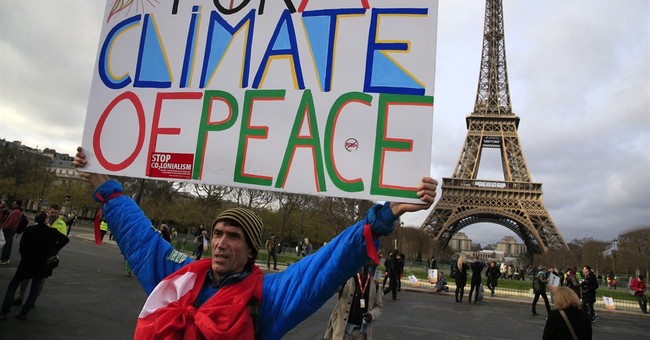 What Dr. Hansen is referring to is that the agreement is so weak, that it amounts to all pain for no climate gain.

So why shouldn’t the U.S. remain in the Agreement, and help make it stronger?

Because the more effective it is, the more painful it will be.

Right now, the Agreement is just feel-good rhetoric, giving the illusion that we are “doing something” about climate change. But even if you believe climate change is (1) a serious threat, and (2) entirely the fault of humans, we have a problem in fixing it.

Human health and prosperity depend upon access to affordable energy. Unfortunately, the United Nations Framework Convention on Climate Change (UNFCCC), and its 2015 Paris Climate Treaty, will hurt the human condition by making that energy much more expensive.

The push to reduce carbon dioxide emissions isn’t like installing scrubbers on smokestacks at coal-fired power plants. The only practical way to reduce CO2 emissions on a large scale is to not burn fossil fuels. Period.

I frankly don’t care where our energy comes from as long as the source is abundant and affordable. To me, that is the only moral position one can take on the subject after examining the science and economics of the matter.

There are six main issues guiding my position.

1) Warming over the last 50 years or so has averaged only about half of what computerized climate models can explain. Yet, those models are the basis for the Paris Agreement.

2) It is not obvious that recent warming is entirely the fault of our CO2 emissions. It is very possible that temperatures during the Medieval Warm Period were just as warm as today. Natural climate change exists. If we didn’t cause it, we can’t fix it.

3) Even if future warming increases to match the models, and all nations abide by the Paris commitments, we will avert only 0.3 deg. F warming by the year 2100. That’s less than 0.04 deg. F per decade, which is unmeasurable by current global temperature monitoring networks (satellites, surface thermometers, and weather balloons).

4) The cost of this unmeasurable impact on future global temperatures is variously estimated to be around $1 Trillion per year, primarily spent by the U.S. and a few other countries which drive global prosperity. As usual, the poor will be the hardest hit. That money could have been spent on clean water and providing electricity to the 1+ billion humans who still don’t have electricity.

5) China and India, which are burning coal like there is no tomorrow, don’t really have to do anything under the Agreement until 2030. It’s mainly up to the U.S. to cut our emissions, and send our wealth to poor countries where dictators will continue to enrich themselves.

6) Increasing CO2 levels have benefits, such as increased crop productivity and ‘global greening’. Life on Earth requires CO2, and over the last 60 years we have been monitoring its levels in the atmosphere, Mother Nature has been gobbling up 50% of what we emit to create even more life.

“But shouldn’t we do something, just in case?” you ask. Well, yes, we already are doing something.

Energy efficiency continues to increase every year, driven more by competition than by government regulation. New energy technologies (e.g. fracking, safer nuclear, renewables) will continue to be researched and developed because abundant, affordable energy is required by all.

The U.S. should exit the UNFCCC, which will automatically remove us from the Paris Agreement. Or, at least submit the Agreement to the Senate for ratification, since it is actually a treaty.

So don’t believe Leonardo DiCaprio, Al Gore, the Pope, and others who claim we owe it to the Poor to remain in the Paris Agreement.

The truth is, we owe it to the poor to get out.