Ross Marchand
|
Posted: Apr 01, 2020 12:01 AM
Share   Tweet
The opinions expressed by columnists are their own and do not necessarily represent the views of Townhall.com. 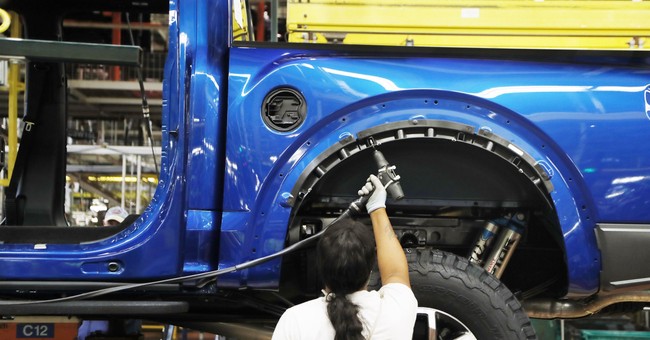 With soaring unemployment and millions of workers having to accept pay cuts, it’s hard enough for Americans to keep up with grocery bills and mortgage payments during COVID-19. But regular household expenses are just the tip of the iceberg for those who still must venture outside the house and drive every day to care for sick family members, make food deliveries, or drive health care workers to and from hospitals. And thanks to strict fuel-efficiency regulations created by the Obama administration, cars are far more expensive than they need to be. President Trump’s recent move to relax these requirements is good news for millions of struggling families and auto industry workers.

As we make our way through this pandemic, Americans will still need to buy cars in the months ahead but will pay far more than they need to thanks to onerous fuel economy regulations. These strict standards have strangled the auto market since the Obama administration.

Back in 2011, Americans were struggling to cope with an economic calamity of a different sort. The financial market had gone off the rails three years prior and President Obama’s regulatory and spending palooza resulted in one of the slowest economic recoveries since World War II. To add insult to injury, the Obama administration spearheaded rules requiring 5 percent annual increases in car fuel efficiency between 2017 and 2025 with the goal of passenger vehicles hitting an average of 54.5 miles per gallon. These strict rules placed pressure on manufacturers to produce more hybrid cars than ever, which unsurprisingly are more expensive than conventional cars. On average, consumers can expect to pay around $5,000 more for the kinds of cars pushed by the Obama administration than cars with less efficiency.

As rules get more stringent by the year, the cost gap will only increase for American households looking to replace their cars. According to a 2016 analysis by the Heritage Foundation, buyers will spend $7,200 extra per new vehicle by 2025 than they would have absent beefed-up fuel economy rules. We’re repeatedly told that these harsh Corporate Average Fuel Economy (CAFE) standards separating consumers from affordable cars are necessary to save the environment. But the environmentalists cheerleading the 54.5 miles per gallon standard never bothered to do the math and see if these strict rules are reasonable.

A 2017 Reason Foundation analysis by scholars Julian Morris and Arthur Wardle found, “implementing the proposed 2025 standards would reduce annual carbon dioxide emissions by 50 million tons at a cost of $50 billion. That puts the cost of CO2 reduced at an astronomical $1,000 per ton – about 50 times the ’social cost of carbon’ estimated by the EPA during the Obama administration.” In other words, the Obama administration’s own estimates on the harm of carbon emissions dictate against strict CAFE standards.

Fortunately, the Trump administration is saving Americans from having to pay exorbitantly high prices for cars during such a difficult time. Under new rules, automakers will only have to increase fuel efficiency by 1.5 percent per year through 2026 instead of Obama’s mandated 5 percent. As a result, consumers in the market for model year 2021 cars will find far more affordable vehicles than would otherwise be the case. Less expensive new cars in turn increase pressure on used car dealers to lower their prices, ensuring more affordable vehicles across the board.

This regulatory relief will come into effect as Americans shake off the worst pandemic in 100 years and repay their debts accrued during this crisis. Loosening up needless rules and lowering auto prices will help households get back on their feet and drive renewed prosperity.