This Is No Time for Puerto Rico Statehood

Ross Marchand
|
Posted: Jul 19, 2019 9:29 AM
Share   Tweet
The opinions expressed by columnists are their own and do not necessarily represent the views of Townhall.com. 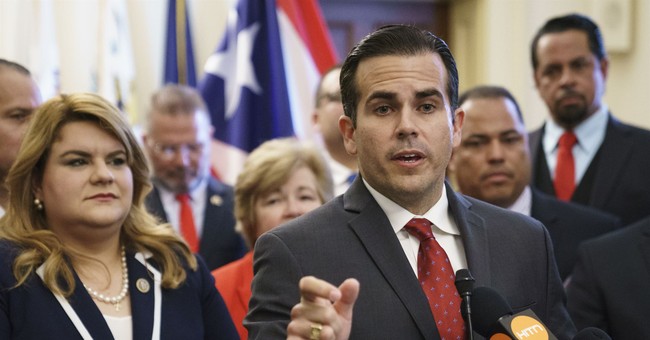 American flag manufacturers can breathe easy knowing they won’t have to sew on an extra star to their products anytime soon. Responding to recent protests calling for the resignation of Puerto Rico Governor Ricardo Rosselló, President Trump commented/tweeted on July 18 that, “A lot of bad things are happening in Puerto Rico. The Governor is under siege, the Mayor of San Juan [Carmen Yulín Cruz] is a despicable and incompetent person who I wouldn’t trust under any circumstance.” The president is right: the island’s epically inept officials have failed their basic governing responsibilities and cannot be rewarded with greater federal funding. Clearly, now is not the time for statehood or federal favoritism.

To say that Governor Rosselló has been having a bad week is an understatement. Throngs of protestors have taken to the streets calling for his resignation after leaked text messages and chats surfaced showing the governor manipulating public opinion polls, disparaging political rivals, making offensive remarks, and joking about dead hurricane victims. Even this despicable behavior is but the tip of the iceberg in a tumultuous 2.5 year governorship.

When the island was ravaged by Hurricane Maria in September 2017, Rosselló boldly assured his constituents that electrical service would be restored by the end of the year. It was not.

If this disaster happened in one of the 50 states, the presiding governor would probably do the responsible thing and hire an experienced, well-respected company to get the lights back on. Gov. Rosselló took, let’s say, a different approach, contracting with a little-known Montana firm called Whitefish Energy with virtually no experience and only a handful of employees. The contract was rife with absurd clauses, such as guaranteeing foremen and general foremen a rate of more than $200 per hour. Unsurprisingly, the Whitefish deal couldn’t endure public and Congressional scrutiny, and the $300 million contract was cancelled just a few days after being announced.

Continued dubious decisions led even more delays in restoring electricity and the Puerto Rican grid remained compromised for nearly a year. This lack of due diligence wasn’t limited to power restoration. Puerto Rico’s December 2017 $133 million deal with a firm called Adjusters International to rebuild damaged homes quickly came under fire amidst allegations that island leadership failed to check the company’s bank balance and credit lines. That contract, too, had to be axed. As a supporter of Puerto Rican statehood, Rosselló’s role in these dramatic missteps, coupled with the recent arrest of several high-profile government officials for corruption, puts statehood advocates in a difficult position. The governor’s New Progressive Party is at the forefront of the fight for statehood.  Party members must now argue that their leader’s abysmal decision-making isn’t representative of island leadership.

Before that 51st star gets emblazoned on the American flag, federal taxpayers need to be able to trust Puerto Rico with their hard-earned money. If these funds get caught up in a tangled web of graft and corruption, taxpayers will find themselves on the hook for tens of billions of dollars in red ink.

Puerto Rico’s full ascension to the U.S., for instance, would make it far easier for the island to get additional federal Medicaid dollars.  Puerto Rico is currently requesting an additional $12 billion over the next four years for Medicaid, but members of Congress are correctly concerned that officials are siphoning off Medicaid dollars for private gain. But, a Puerto Rican state would be eligible for unlimited matching of Medicaid dollars for any local spending (instead of its current capped grant), which would only fuel corruption at the out-of-control Health Insurance Administration.

Before any discussion of statehood, federal and island policymakers must work to tame rampant graft and corruption. As a start, Congress should demand that Puerto Rico officials utilize a transparent contracting process in which taxpayers and lawmakers are kept in the loop at each stage of deliberation. Good governance reforms would lead to more trust between America and its territory and make tragedies such as the 2017-2018 electricity crisis a thing in the past. Until then, don’t expect American flags to be adorned with an extra star.