Conversation: An Ideological Bridge Too Far 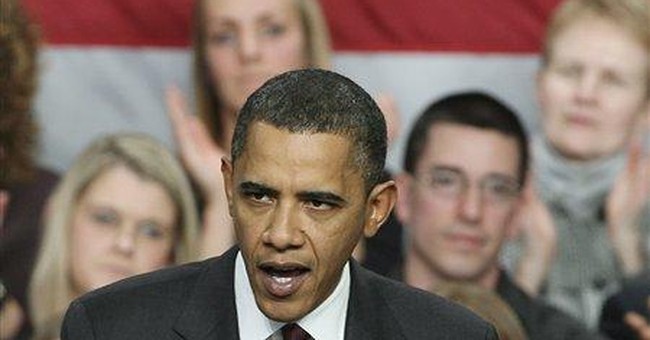 Mr. President, we haven't talked in a while -- not since Massachusetts and the State of the Union. A lot has gone down.

Good to be chatting again. So how'd I do in my State of the Union?

By one count, 114 uses of "I," "me" or "my" -- probably a modern record. And you insulted some of your invited guests, notably the Supreme Court over its ruling that disallowed corporate and union campaign spending limits on free-speech grounds. What's more, you said you had heard the message of the voters of Massachusetts, and then proceeded to press for what they effectively said you should not: health care, cap-and-trade, Guantanamo, homosexuals in the military, illegal immigrants, green energy.

Look. As I said in reaching out to House Republicans the next day, "I am not an ideologue." We need to move past partisanship. We need to regain "the sense of common cause that existed a year ago." We need to get on with "pay as you go" and deficit reduction.

As I have told you, I am not an ideologue.

SIR, with all due respect, you're maxing out my baloney meter. Can't you hear it wildly pinging?

You've never really acknowledged that Scott Brown's election to Teddy Kennedy's Senate seat has killed ObamaCare. You know cap-and-trade is going nowhere, even though you continue to push it. There has been no official administration word that your proposed Manhattan civilian trial of Sheik Khalid Mohammed won't ever happen -- indeed that the Khalid trial would be more prudently held not near Wall Street but at precisely the Guantanamo you said you would shut by the first anniversary of your inauguration.

In the State of the Union, you sanctimoniously mocked those who nourish doubts about man's role in global warming, even though the UN and England's University of East Anglia and our own National Aeronautics and Space Administration (NASA) seem to have manipulated the numbers.

But Osama bin Laden concurs that the U.S., as the globe's leading industrial engine, is the principal carbon-emissions contributor to climate change.

Precisely -- and again with all due respect -- Osama and Obama are on the same side at least on that one. It's almost funny.

I THINK you're missing the point about Massachusetts. We had an unfortunate candidate. And the Republicans were distorting the ObamaCare bill. It wasn't fair -- and certainly not a level playing field, certainly not when you throw in the conservative media.

The dominant Boston Globe is conservative? That's rich. You carried the state in November, 2008, by 26 points. Republicans haven't won there since saddle shoes -- and this time they didn't distort anything. The big swing in Massachusetts was by independents.

No sir. It was just your normal everyday voters angry about (a) an augmented government role in a proposed health care system from which those poised to pass it exempted themselves, and (b) increased federal regulation that failed to improve the lives of voters hurt by the worst economy in 70 years, voters forced to cut back as you grew the federal government inexorably bigger. For such voters, in Massachusetts for heaven's sake, just like the everyday rest of us, a federal takeover of health care after a huge federal grab at the economy was a tremendous over-reach -- an ideological bridge too far.

But I am not an ideologue.

MR. PRESIDENT, you just don't seem to get it. An ideology is a shackling, blinkering line of thought that controls how one views the world. In your case, your rigid leftism restricts the intellectual freedom that would allow you to approach events and developments in an independent, centrist -- even conservative -- way. Because you are so reflexively partisan, you are incapable of practicing the bipartisanship you preach.

For you, bipartisanship works only when independents, centrists, Republicans, and conservatives sign on to your proposals -- go along with your points of view. Your definition of bipartisanship boils down to "my way or the highway."

MAYBE you missed the news stories. I have embraced "pay-as-you-go." In my 2011 budget, I have proposed freezing discretionary spending. If Congress won't do it, I will appoint a bipartisan commission on deficit reduction. None of that can be even remotely construed as ideological or reflexively partisan.

Yes it can. (1) In an hour begging for reduced spending, your 2011 budget calls for $85 billion more in federal spending than the 2010 budget. Indeed (2), your 2011 budget would freeze just $447 billion, only 12 percent of the budget -- and would freeze that spending at your forced-up, "stimulus" levels enacted a year ago. Finally (3), "pay as you go" and your suggested bipartisan commission are just screens for already-proposed higher taxes that would bring in $1 trillion in additional revenues -- from practically every American -- by 2015.

As it is, you are on track to match during your first 20 months in office the $3.3 trillion in additional debt that the previous administration added during eight years.

As I said on one of the Sunday talk shows last month, we need "to try to reset the tone."

Yes sir, we do. And given the Massachusetts primal scream, if you're capable of doing so then you're the one who must come back across the ideological bridge. And of course, you're the one closest to the tone switch. It's right there in the Oval Office -- on your desk.

'Nope! Done': Tucker Shuts Down Interview with Ed Gavin
Townhall
LeBron James' 'you're next' tweet about officer who shot Ma’Khia Bryant got deleted (but here it is)
Twitchy
Joe Biden Releases an Absolutely Disgusting Statement on the Columbus Police Shooting
Redstate
Insanity Wrap #191: Did Jury Intimidation Play a Part in the Chauvin Verdict?
PJ Media