Just in Case: Items Suggesting the Direction of Things 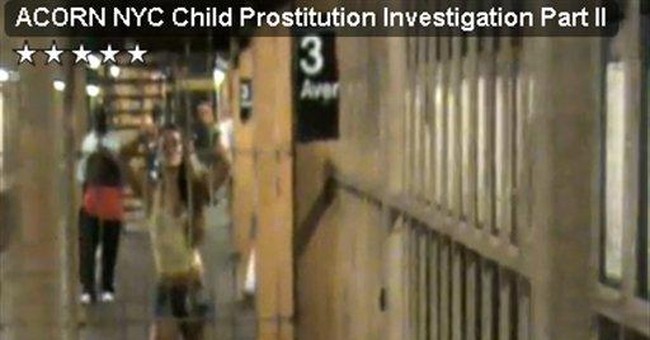 On the landscape of happenings suggesting the direction of things these days, maybe you missed...

That Democrats supposedly are "vexed" (in the words of at least one headline) -- vexed -- that the wacky group Acorn is receiving hefty infusions of cash from Big Labor, specifically from the Service Employees International Union. The connection -- apparently a stunning revelation for leftists everywhere -- currently is an issue in states such as Illinois, Kansas, and Virginia.

That, at the urging of Big Labor, lofty congressional Democrats are weighing a national tax on financial transactions to help defray the costs of a move to socialized medicine.

And, in connection with the role of Big Labor in the incumbent regime, maybe you missed this -- from a Wall Street Journal editorial: No trucks from Mexico, no new trade agreements, a sweet deal for the United Auto Workers at GM and Chrysler, tariffs on Chinese tires, and now Big Labor has another demand of the Obama administration: Overturn 75 years of labor policy to sandbag Delta Airlines and unionize transportation workers. Will it get that, too?

THEN, just in case you missed it, as measures of the depression in the newspaper industry, wherein at least six publishers have filed bankruptcy in the past year: (a) Philadelphia's Inquirer and Daily News soon will be sold at auction, with lenders holding $300 million in debt the prospective winners. (b) Similarly, the Chicago Sun-Times likely will be sold for $5 million plus the assumption of about $20 million in liabilities.

California has revised its rules for the teaching of Islamic studies to public school seventh-graders. New guidelines, according to Investor's Business Daily, "whitewash the violence and oppression of women codified in Islamic law, or Shariah. And they're loaded with revisionist history about the faith" -- notably, again, about the treatment of women.

According to the executive director of the Sarcoma Foundation, the federal Food and Drug Administration has "turned its back on 25 years of regulatory precedent and rejected a new cancer drug that by all known standards had passed muster for approval." Rejection of the chemotherapy drug Yondelis thus denies women a potentially powerful new option for fighting ovarian cancer.

IN CASE you missed it, Commerce Secretary Gary Locke has pronounced a proposed free-trade pact with Colombia dead for the year. Congress, it seems, is too busy to approve it. Never mind that Colombia is our closest ally south of the border, and the only country throttling cut-throat guerrillas financed by (among others) the drug cartels. On this one, Congress is doing the bidding of the administration: Barack Obama opposed the free-trade pact during his presidential campaign. Yet he and his administration favor abundant new agreements with Cuba.

And maybe you never saw on your screen that (1) in their National League division playoffs, the Colorado Rockies had a snow-out at Denver's Coors Field for Game 3 with the Philadelphia Phillies -- or that (2) Arctic sea ice is thickening and Antarctic snow melt stands at the lowest level in 30 years. It's obvious these are consequences of global warming.

Perhaps you also failed to notice that General Motors has sold its Hummer division -- a marquee American brand -- for $150 million to Sichuan Tengzhong Heavy Industrial Machinery Co. in (whoever would have guessed it?) China.

YOU MIGHT have missed Justice Antonin Scalia's scathing remark -- during arguments before the Supreme Court in a case brought by atheists to remove a cross built 75 years ago by the Veterans of Foreign Wars on federal lands in the Mojave Desert: "It's erected as a war memorial (to World War I soldiers). I assume it is erected in honor of all war dead. What would you have them erect -- some conglomerate of a cross, a Star of David, and...a Muslim half-moon and star?"

Possibly you missed, as well, (a) that the Obama administration has asked Congress to extend key provisions of the Patriot Act, a measure that Barack Obama dismissed in 2004 as "a shoddy piece of legislation." And (b) that the administration has asked an appeals court to deny access to U.S. courts for detainees at a military prison in Afghanistan -- access candidate Obama favored for detainees at Guantanamo.

Finally, these two items from the collegiate scene likely escaped you. Item: Tufts' Office of Residential Life and Learning has decreed: Any sexual activity within your assigned room should not ever deprive your roommate(s) of privacy, study, or sleep time. And Item: Yale's Alumni Magazine carried a prideful multi-page July/August cover story headlined: Why They Call Yale the 'Gay Ivy.'