An Imaginary Conversation on Taxes 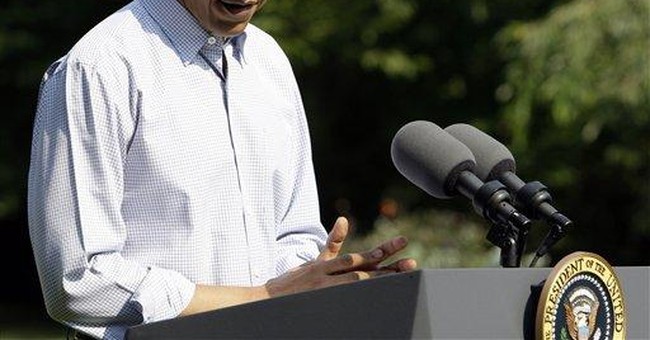 Ever wish you could chat with the president? Here's how a conversation might go....

Glad to see you again. How about a beer from the first post-racialist president?

Mr. President, today could we talk not about race or health care, but about taxes?

Sure. They're one of my strongest areas. And I've been very clear. I told the Democratic Convention a year ago that "in an economy like this, the last thing we should do is raise taxes on the middle class."

In September, I told a huge crowd in Dover, New Hampshire: "Under my plan, no family making less than $250,000 a year will see any form of tax increase. Not your income tax, not your payroll tax, not your capital gains taxes - not any of your taxes. You will not see any of your taxes increase one single dime."

But nearly all the taxes you cited in Dover are scheduled to go up - for everybody - beginning in 2011, when the 2003 Bush tax cuts are set to expire.

Those were adopted by Congress as temporary tax cuts, unless Congress voted to extend or make them permanent. It's difficult to argue the higher taxes that will be restored in 2011 will be tax increases recommended or approved by me.

Sir, you certainly were not known during your four years in the Senate for urging the Bush tax cuts' extension or permanence.

I was known best for talking about the need to move beyond racialism and partisanship. I campaigned as an advocate of post-partisan politics.

And not raising taxes -

On the middle class.

Yet your Democratic Congress already has raised cigarette taxes, which fall most heavily on the middle class -

To fund ObamaCare for the young.

Ditto the Democratic proposal for new taxes - including new taxes paid by employees - on companies that don't provide health insurance.

Of course - to help fund ObamaCare generally. We need ObamaCare.

So are you going to fund it and your many other initiatives through tax increases? Did Treasury Secretary Geithner and Economic Council Director Summers give the game away when they both said on the first weekend in August that tax increases cannot be ruled out?

They were talking about raising taxes to address deficit spending. The Chinese have said we must do something, and the Chinese are right in this - as in so much else.

So you're going to raise taxes across the board to reduce deficits - because the Chinese said we should? What about your pledge not to raise taxes on the middle class?

Look. Deficit spending is horrible, as I and distinguished members of my party said time and again about the Bush Republicans. This post-partisan president says thank Heaven that bunch is gone.

Sir, this year's deficit is headed toward $2 trillion - about quadruple the size of the largest annual deficit of the Bush II years. It is the first annual deficit ever to exceed $1 trillion.

That's huge. Maybe we need a value-added tax to reduce it. The VAT is very popular in socialist European economies.

The VAT also hits everyone, including the middle and lower classes, without anyone realizing he's being taxed up to his keister. A tax is paid at each step of added value on a product or service. Everyone pays it.

My distinguished tax reform commission will look at the VAT, I'm sure.

If the commission backs a value-added tax, which seems a near certainty, would you support such a recommendation?

Clearly, you wouldn't. I'll lean heavily on my distinguished team of advisers primarily educated at Harvard - like me.

Raising taxes or imposing new taxes in weak economies is the idiot's path to collapse. They crush growth. We need not higher taxes but reduced ones - as Germany's Angela Merkel advocated recently, despite the big deficit in her country. She noted Germany must emerge "stronger once the crisis is over....The answer is we need growth."

So what would you do if you were me?

In the knowledge that consumer spending drives the economy, stabilize the dollar. (Dissing the dollar killed the Bush administration.) Cut taxes. Gradually raise the age at which Social Security and Medicare benefits begin. Get out of insurance, automobiles and banking fast. Stop trying to socialize medicine. Stop encouraging indebtedness by rewarding debtors with loan forgiveness and credit guarantees. And stop penalizing - through goofy cap-and-trade legislation - companies that manufacture and produce and strengthen the U.S. economy.

But that would mean the failure of my agenda.

Sir, the media and the voters never forgave Bush I for saying, "Read my lips: No new taxes!" - and then turning around and raising taxes. You're risking your political future too by doing the same thing.

Not me. I'm Barack Obama of the Silken Tongue.

Meaning no offense, sir, but the public - the voters - are starting not to believe what you say because they don't think you say (or know) what you mean. Increasing numbers of them are taking their silken-tongued president less and less seriously. You might want to study the mounting public derision of Jimmy Carter during his four-year presidency.

It was over for him, sir, when they began laughing at him.