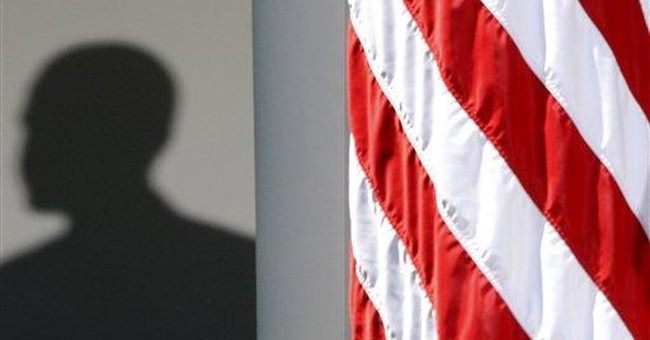 Friends, this bulletin: There is news beyond the late lamented Michael Jackson.

For instance: The Minnesota Supreme Court has given Al Franken his creds to try to surpass as a Senator his dismal performance as a comedian - the two professions being so intimately linked. Bernie Madoff has begun a 150-year stint for ruining lives on a hitherto unimagined scale. And...

-- Seven states failed to get their game together sufficiently to pass budgets by their June 30 deadlines. Currently running a $26 billion deficit in a $92 billion budget, California leads the way. So to contractors, local governments, welfare recipients, students on scholarship, and taxpayers awaiting refunds - in the month of July alone the Golden State expects to hand out about $4 billion in...IOUs.

-- Many states may be in effective bankruptcy, but with the help of federal monies to erase its debt, General Motors has just emerged from it. Questions: What serious private-sector lender will extend credit to GM now? And: What about the dilution of GM's talent pool? Will any MBA in his right mind want a GM job?

-- Moreover, in the words of Cato Institute economist Alan Reynolds: "General Motors can survive bankruptcy far more easily than it can survive President Barack Obama's ambitious (Corporate Average Fuel Economy (CAFE)) standards, which mandate that all new vehicles average 35.5 miles per gallon by 2016....The government is already planning to spend about $50 billion bailing out GM, plus $7 billion for Chrysler. Will President Obama provide Detroit automakers with even more subsidies to pay CAFE fines?"

-- In addition, the lending squeeze may send many of the nation's major airlines (Delta, American, United, Continental, and USAir) into bankruptcy by winter - again.

-- Yes, judge and empathist Sonia Sotomayor will be confirmed as the next Supreme Court justice, and all the best to her. Among the many dubious aspects of her confirmation hearings were the preening stuffed-shirt senators who supported her by ripping Chief Justice John Roberts - nominated by Obama's villainous predecessor - and "the Roberts court."

-- Oh, the things Congress has done and left undone. By raising the minimum wage, effective July 24, from $6.55 to $7.25 an hour, it will exacerbate teenage unemployment (in June, 24 percent for teenagers overall - and 38 percent for teenage African-Americans).

-- And with Pakistan finally getting serious about fighting Taliban and al-Qaeda terrorists, Congress is dawdling over adoption of the five-year, $7.5 billion aid package for Pakistan requested by the White House. Given that it is fourth down in the terror game, will Congress punt?

-- One of the distinguished former residents of Guantanamo - Abdullah Ghulam Rasoul - goes by the name of Mullah Zakir. After five years in Gitmo (where his rights as a detainee were restricted), Zakir was handed over in 2006 to Afghan authorities, who stashed him in the Pul-e-Charkhi prison before releasing him in 2008. Zakir's current job description: senior military honcho for the Taliban.

-- In addition to solar, wind, tidal, butterfly, and other "alternative sources" of power generation, does President Obama favor advancing nuclear energy in the U.S.? Hard to say. In his vast sea of inky rhetoric, it's a topic rarely found. But he definitely favors it for Iran. In April, he said he supports "Iran's right to peaceful nuclear energy with rigorous inspections." In June, he told the BBC, "I do believe...Iran has legitimate energy concerns, legitimate aspirations." Still, instead of nibbling around the edges with "alternatives" in the U.S., what about increasing the nuclear component for true energy independence?

-- Recall, please, the outrage liberals voiced at Bush administration deficits running to hundreds of billions of dollars. One might have thought they were born-again free-marketeers. Hardly. The deficit is going to come in at oh about $1.9 trillion for this fiscal year - courtesy of Obama, Pelosi, & Co. And the leftist silence about it all just screams.

-- Finally, this: The Senate Armed Services Committee has been hard at work saving money and protecting the citizenry by whacking away at defense spending. It proposes reducing outlays for the Missile Defense Agency by $1.2 billion, cancellation of the Multiple Kill Vehicle program and the Kinetic Energy interceptor, retiring 250 of the oldest Air Force tactical fighter aircraft, and ending production of the C-17 cargolifter. Notes an outraged Sen. John McCain: "It is the rarest occasion when a fully mature weapons system is terminated by the Congress."