Consecutive Term? I Think Not! 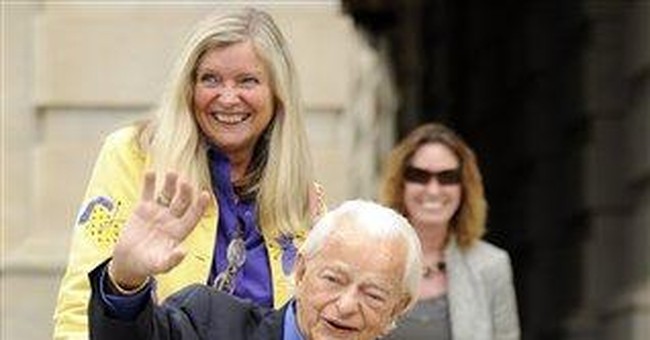 When the Framers of the Constitution determined that elected representatives should be allowed to serve consecutive terms in office, they couldn’t have foreseen anything like the multi-year, multi-million dollar campaigns of the twenty-first century.

Given the current size of our country and the cost of airtime, any incumbent who hopes to be reelected has no choice other than to spend a large percentage of her time in office raising money for her next campaign.

Furthermore, since politicians have an ongoing need for campaign funds to ensure their continued employment, they have to keep their campaign contributors happy. This encourages earmarks and other shenanigans that are contributing to the bankruptcy of this country.

This could be easily remedied! I propose a Constitutional amendment prohibiting elected officials from serving consecutive terms in office. Ever!

Could they serve more than one term? Absolutely. But after serving a full term, an official would be required to take a hiatus for the same number of years he has served in office before being eligible to serve in any office. In a span of 24 years, a person could have six terms in Congress, two in the Senate, or three as president.

One of the benefits of this arrangement would be that only private citizens would be running for office. No one would have the “incumbent’s advantage” that makes re-election almost a sure thing for many, if not most, elected officials.

Half the seats of the House of the House of Representatives would open up each year, and only private citizens, i.e., people who have spend at least the previous two years doing something else, could fill them.

In a way, this would be similar to a parliamentary system, in which elected officials are subject to votes of confidence rather than automatic re-election. I suspect Senators’ and Representative’ votes would be much more representative of their respective districts than they are now. An elected official who planned to run for a second term two years after leaving office would have to be better be on pretty good terms with his electorate, as he would need to be re-nominated and then re-elected. His opponent would be a private citizen from the other party. We might actually hear meaningful debate, as both candidates would be outsiders fighting to get back in.

Likewise, each senator would serve six years in and six years out of office. If she intended to run again, she would be well advised to gain some valuable experience in industry or academia perhaps, so as to have something noteworthy to show in the next time she runs for office, by which time the public’s memory of what she helped to accomplish in the Senate (or perhaps what she did to make things worse) in would have faded.

The President’s advantage would also be gone in a year. With the members of the House and the Senate rotating in and out continually, bi-partisanship would take on new meaning. The president’s influence on members of Congress would be much shorter-lived if those members of Congress weren’t preparing for their next campaigns and in need of their respective party’s support from Day 1.

The president would also think twice before passing pet ideas or projects without both bipartisan support and the approval of the majority of Americans. Legislation passed without broad backing might well be overturned the next year when new members of Congress are voted in.

Finally, Republicans and Democrats might actually start working together to solve the country’s problems. The President might actually become a leader of the American people, not just the head of his own party. Let's make sure he represents the interests of all Americans.

By eliminating consecutive terms in office, we remove the temptation and money from the system that has corrupted the politics and politicians that run our government today. We can make our country, America, what it was destined to become: the greatest nation in the world.