Are We Afraid of Results? 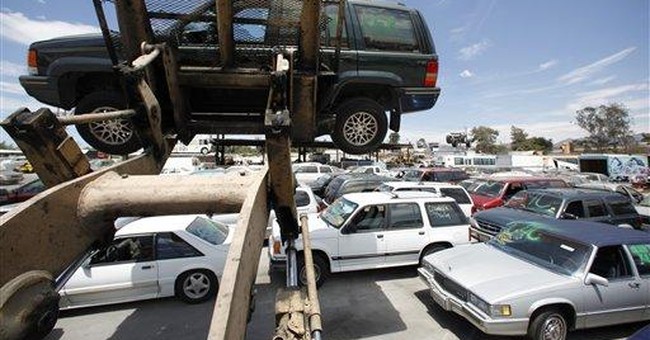 An answer is what every question needs, a result is what every experiment needs. So why aren't we concerned with results? The only thing that seems to be interesting to the general public is a quick blush of results without any real meaning or understanding. Let's take the cash for cars program as a good example. We are quick to ballyhoo about how fast the cars sold, but we forget to analyze what happened and draw some conclusions.

Is there any doubt that one could sell anything to anybody if we reduce the price substantially below the cost of the transaction?

We gave anyone who qualified with a "clunker" $4500 to buy a new non-gas guzzler car, foreign or domestic. The $4500 cost the tax payer $6500, but that will be discussed at another time.

The car dealers sold about 220,000 cars, going through a billion dollars in a week. Did this prime the pump for future and continuing car sales, or was it just another give away? We don't know and won't know because we couldn't be bothered to wait to see what happens. We just had an additional $2 billion added to the program which might prove either that giveaways work, or that auto sales might pick up sometime down the road. Or, if we are really unlucky, we could create a car bubble because the auto companies have started to produce new inventory to meet the demand. The danger is this could turn the give away program into a new giveaway of inventory that was over built on false pretenses that the demand for autos was back.

Even when results are in, we seem to be reluctant to evaluate them before moving ahead again. We have seen the government run Medicare, Social Security and the Post Office, and now they are prepared to put the government in charge of our health. Talk about frightening. Medicare and Social Security would have been okay, perhaps, if they (the government) would have left the money in the funds for starters. Instead, they took the money out of the Trust Funds to cut the deficit (not limited to one political party). Results of those two trust funds would be light years better if they had the missing funds to work with. The post office, on the other hand, would be in good shape if they didn't deliver the mail. The guys who ran the Post Office must have been really great businessmen (not) because they couldn't make money when they were a monopoly in this country. Now two giants are doing well, Fed Ex and UPS (per President Obama), and the Post Office is losing 7 billion dollars a year. Go figure!

Let’s look at the field of finance and get some results from the government's action to cure the financial malaise we have suffered through as a nation.

They gave banks money, without any direction, and watched the banks "right the ship". Most of the big banks made money from selling the Treasury paper that financed the deficit caused by all the stimulus programs, originating "safe" Fannie, Freddie and FHA loans that were sold to the aforementioned government entities, and in some cases, buying their own stock and watching it rise in the up trending stock market. What they didn't do was control the bonuses to executives, help the business community expand their businesses with business loans, try to revive the missing part of the real estate market (which means offering jumbo loans), and generally work to improve the lives of individuals in this country. As businesses in this country, a capitalistic, free society, they needn't give the aforementioned goals a passing thought, but, taking money from the government (the people’s money) requires a different set of values. From my vantage point, the banks failed to do their duty. The missing piece of the puzzle was banks were required or coerced to take this money and were not given any direction for use. That statement indicts government and its leaders more than any other I have heard. No businessman would make that kind of mistake and be able to remain in business. The difference between business and government: money is a rare resource to business, not to government. Government can tax or borrow with impunity and never gives it a second thought.

Real estate must recover for the economy to remain vibrant in the long run. It can't happen until the mortgage market is given the sufficient tools to facilitate the move-up market, which is poised to take off because of the massive entry into real estate, based in a large part on the government's $8000 investment tax credit for first time home buyers. Do not look for this government to help in any way because it doesn't fit the real goal of this government, to perpetuate itself by controlling the populous. Also missing in the real estate arena is common sense lending. It is gone, verboten and missing in action. When the studies are produced in years to come as relates to who was a risk as a borrower and who wasn't, the nation may be surprised to see that the self-employed, stated income borrower didn't fare any worse than the employed, full-documentation borrower. The mortgage industry, under the guidance of such well informed and well meaning politicians as Chuck Schumer and Barney Frank, has completely lost track of borrowers and is busy creating a large amount of paperwork to prove, if challenged, that they overlooked nothing. Unfortunately, they never stop to realize that all the paperwork and stop gaps in the world don't insure payment of the loan if the borrower loses his or her job.

This gets me back to the real emphasis of this column, which is to show why, in my opinion, nothing should be run by the government that can be run by private industry instead. If you haven't run a business or professional practice and realize that mistakes can cost you everything, including your business or practice, you can't assimilate the experience. You can't read about it or learn it from a teacher, you need to experience it and see how you react under pressure. Even though the government is in charge of some enterprises and ventures, they still don't get the feeling of what sacrifices need to be made to keep the project afloat because of their unique ability to acquire the life blood of any enterprise: money. The experience the private sector gains from simply keeping afloat is like no other, period.

That said, I wouldn't let the government run a nationwide pet health program, let alone a program that has worked for all these years and is at the pinnacle of all health systems in the world. It should be illegal, and I believe it is as a senior citizen, because suicide is against the law.