The Kennedy Assassination and American Patriotism 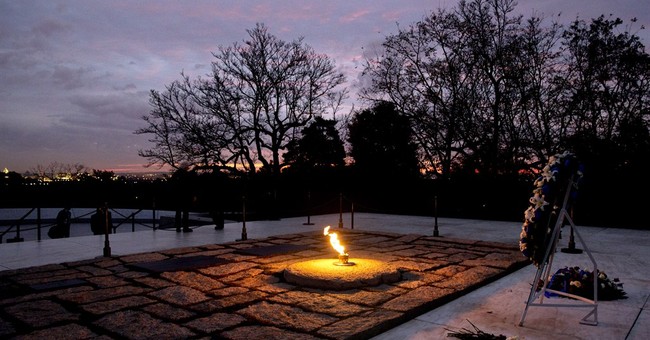 All of us over a certain age remember where we were when President Kennedy was assassinated. Although only six, my memory of learning of his murder remains crisp and indelible. There are no apt words to capture the shock or measure the grief of an entire nation, or even of a single heart.

That we so intensely grieve the loss of a man killed 50 years ago speaks to a number of things: the horrific circumstances of his death, his blood-stained wife, his tiny children, his youth and the many things his murder left unfulfilled. The Sixties were a miserable time to grow up; the nation unraveled as all manner of evil, foreign and domestic, corroded our culture. Invariably, one wonders if the sudden, devastating death of a young president catalyzed a much more violent social unhinging than otherwise would have been.

We have come to learn that Kennedy was a serial, and not particularly discrete, adulterer. He took dangerous combinations of drugs to mask his Addison’s disease and other ailments. His perceived timidity with Nikita Kruschev at their 1961 meeting in helped precipitate the Cuban missile crisis.

He has been called “a liberal Cold Warrior.” Upon finding that the so-called “missile gap” he had run on in 1960 was chimerical, he nonetheless launched the greatest single acceleration of the international arms race in history with his ICBM initiative (by 1964, we had more than 2,400 missiles versus 375 for the ).

Kennedy also cut taxes (modestly, although along supply-side lines) and stood firmly against Communism. And in perhaps the most eloquent explanation of the basis for American foreign aid ever delivered, he wrote, “[W]idespread poverty and chaos lead to a collapse of existing political and social structures which would inevitably invite the advance of totalitarianism into every weak and unstable area. Thus our own security would be endangered and our prosperity imperiled. A program of assistance to the underdeveloped nations must continue because the nation’s interest and the cause of political freedom require it.”

Regrettably, some of the aid Kennedy approved apparently included funding for “family planning” in the developing world.

But the man and his presidency are not really at issue in this essay. Overlooked, in my view, in all the writing and reminiscing about that day in is something that goes beyond the compassionate grief of a decent people. It underlies the trauma and the mourning all of us then alive have for so long felt. I can think of no better way to put it than simply this: American patriotism.

From our earliest years, most of us are taught, rightly, that this is the greatest nation on earth, that whatever our imperfections, we have more fully realized the promise of “liberty and justice for all” than any nation, at any time. We learn these lessons from an honest study of what Kennedy once called “our ancient heritage,” from the ongoing saga of men and women coming here to walk with hope and promise, and from our shared but personal experiences of liberty, opportunity, and prosperity.

Love for country is an underestimated force in American public life. Shortly after , I was riding the D.C. subway system and saw a young African-American in worker’s clothes sitting by himself. He had a red, white, and blue bandana on. As I got off, I turned to him and said something like, “I like the colors of your bandana.”

The young man broke into a warm but dignified smile as our eyes met and we both nodded. I have not forgotten, nor will forget, that moment.

For American patriots, and that remains the great majority of us (however incoherent such national devotion might be, depending on the individual and the views he holds), a president represents so much of who we believe, or want to believe, we are. In that single individual we invest more of ourselves than we might be prone to admit. Conservatives are not political fans of Barack Obama (I am talented at restating the obvious), yet were something to happen to him personally, it would be like an attack on all of us.

We disdain many of our current president’s policies, and fight against them. We are discomfited by his performance as our national leader. We esteem his office, and wish him and his family safety, health, and happiness.

These impulses are not contradictory; our dissent is as much a validation of our patriotism as is our respect for the position of Chief Executive.

That’s an underlying reason we still ache at the memory of . The president, who represents the nation in the psyche of and the perception of the world, was brutally and unjustly killed. The bullet that ended his life convulsed our soul. A piece of all of us who remember that day and the painful days that followed was scarred ineradicably, as well.

May such an event never recur. May God protect the president of the , and may He guide and bless our beloved country.