Robert Orlando
|
Posted: Jun 01, 2021 12:01 AM
Share   Tweet
The opinions expressed by columnists are their own and do not necessarily represent the views of Townhall.com. 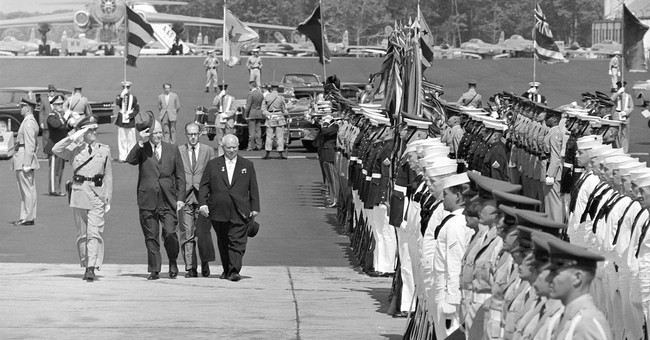 Robert Frost’s iconic poem, memorized by generations of schoolchildren, reflects on one man’s choice between two roads that “diverged in a yellow wood.” Frost’s message was that the man’s will affected the course of his entire life. But what if the ‘choice’ was not that of a single soul but great power at war?

Who should have the right to make that choice: The political leader or the military leader? The general can see the battle clearer than any politician but often can only see the battle and not the war. The politician may see the full scope of the war, but that scope may blind him to the fight on the ground. These conflicts have been at the heart of some of the most significant moments in history.

Arguably the most far-reaching of those decisions took place on the road to Berlin in 1945 - a decision that continues to haunt us until 2021.

On the night of April 15th, 1945, Germany, Russia, and the United States prepared for a battle that would change the future of humanity and feel its ripple today. By the time it ended, 16 days later, a Reich would fall, a free nation would falter, and a Red Menace would rise.

They committed atrocities and were ambivalent to their horrific casualties, but they possess a clear vision that allowed them to achieve their objective. If only the generals and the politicians from the West had found that harmony; what a different world it would be.

That Eisenhower reversed himself on Berlin is clear. Though he offered three reasons why he would not let the Western Allies move into Berlin, his change of strategy is mystifying at best and dereliction of judgment at worst. To this day, Eisenhower’s rationale factors into most discussions of World War II and has caused a rift between Anglo and American scholars, mirroring inevitable disagreements between Churchill and Roosevelt.

Eisenhower’s stated reasons for holding Allied troops back from Berlin are as follows:

In 1945, America made a decision not to challenge the Soviet Union. In 2019, America is still paying for that decision. The choice made on the Autobahn in the closing hours of World War II in Europe continues to impact the world.

At the center of this historical crossroads, one dominant question remains: Was the choice to stand down and cede Berlin to the Russians, when the Western Allies were within striking distance, a necessary choice or a monumental political blunder?

Should a battlefield commander be allowed to overrule the orders of his commander-in-chief? A single decision can transform a life, a nation, or the world in poetry and war.

In his bestselling book, former U.S. Secretary of State Henry Kissinger observed: “Having been handed the prize Stalin proceeded to show that he, at least, had his political priorities straight. Contravening his assurances to Eisenhower, he ordered the main thrust of the Soviet ground offensive to be aimed at Berlin, giving Marshals Zhukov and Koniev two weeks to launch an attack he had told Eisenhower would not take place until the second half of May!”

There is no question that the Allies were thwarted in their quest to take Berlin. But why? Why did Eisenhower forfeit the convictions he had held earlier? Professor, historian and author David Clay Large offers this explanation:

“The reason Eisenhower was not prepared to dicker on Berlin was that he had come to believe that holding the Western position in the city was symbolically imperative (if militarily difficult). The alternative scenario he conjured up if the West voluntarily gave up Berlin, or was forcibly kicked out, was very dramatic. He saw the old German capital as the first of a proverbial row of dominos, which would inevitably start tumbling if the West abandoned the city.

“Once Berlin went, Germany would be next, and once Germany fell, all Europe would tumble, and with Europe in Soviet hands, America would be unable to remain a democratic nation. As Eisenhower put it: “If Berlin fell, the U.S. would lose Europe, and if Europe fell into the hands of the Soviet Union and thus added it great industrial plant to the USSR’s already great industrial plant, the United States would be reduced to the character of a garrison state if it were to survive at all.”

In other words, the loss of Berlin meant a fascist America.

Opinions, like the leafy path in Frost’s poem, diverge. They diverged in 1945, and they do today. The consequences of allowing the Red Army to reach Berlin before the Western Allies are incontrovertible; that decision gave the Soviets a chance to establish their beachhead and rain terror on Berlin and Eastern Europe. The reasons behind the decision seemed just as clear and uncontested. But new research and the ability to look at events in a new light combine to make this author think that the world would have been a very different place if Eisenhower hadn’t called “halt.”

There is a haunting echo of “What if” at the end of Frost’s poem: “Two roads diverged in a wood, and I took the one less traveled by And that has made all the difference.”

What if Berlin were The Road Taken, then what might have been?