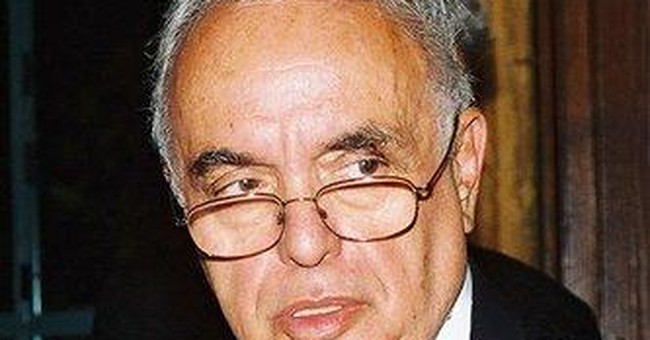 WASHINGTON, D.C. -- The main reason I am writing this column is that many people have asked me how I first realized I was suffering from a brain tumor and what I have done about it.

But I also want to relate the reaction to my disease, mostly compassionate, that belies Washington's reputation.

The first sign that I was in trouble came on Wednesday, July 23, when my 2004 black Corvette struck a pedestrian on 18th Street in downtown Washington while I was on my way to my office.

I did not realize I had hit anyone until a shirt-sleeved young man on a bicycle, whom I incorrectly thought to be a bicycle messenger, jumped in front of my car to block the way. In fact, he was David A. Bono, a partner in the high-end law firm Harkins Cunningham. The bicyclist was shouting at me that I could not just hit people and then drive away. That was the first I knew about the accident. Mr. Bono called the police, and a patrolman soon arrived.

After I said I had no idea I had hit anyone until they flagged me down and informed me, Mr. Bono told The Washington Post, "I would not believe that." Fortunately, the investigating officer, P. Garcia, was a policeman who listened and apparently believed me. While Mr. Bono and other bystanders were taking on aspects of a mob, shouting "hit-and-run," Officer Garcia issued a right-of-way infraction against me, costing me $50, instead of a hit-and-run violation that would have been a felony. Following Officer Garcia's instructions, I promptly paid the $50 fine at Third District Police Headquarters in Northwest Washington, in cash and in person.

Officer Garcia's justification in believing me was soon confirmed by the diagnosis of my brain cancer, in which I have lost not only left peripheral vision but nearly all my left vision, probably permanently. Several people have asked me whether the person I hit was crossing in front of me on my left. I answer, "I never saw him."

The person I hit, identified by police as Don, with no fixed address, was taken to George Washington University Hospital, where police said, "There are no visible injuries."

On the next day, Thursday, July 24, there were more clues that something was seriously wrong. I lost my way to my dentist's office in Montgomery County and never found it. I also had trouble finding my way back to my office. After returning from a speaking engagement in North Carolina on Friday, I found it difficult locating my office in the 13-story building where I have been a tenant since 1964.

My wife Geraldine and I left Washington Saturday to spend the weekend with our daughter, Zelda, and her husband, Christopher Caldwell, and their children at their summer house at Manchester-by-the-Sea, Mass. When Geraldine noticed that I was having trouble following her in the Boston airport, she suggested I go to a hospital emergency room. I always resist such suggestions and did so this time, but fortunately Zelda prevailed. The CT scan at Salem Hospital showed a brain mass. I returned to the summerhouse and went into seizure the next day.

When Zelda said to call 911, I again resisted, but she again prevailed. I promptly suffered another seizure in the ambulance, the second of three seizures that day. I gained admittance to the high-quality Brigham and Women's Hospital in Boston, which has an excellent oncology staff. A biopsy was performed, which showed a large, grade IV tumor. In answer to my question, the oncologist estimated that I had six months to a year to live. Being read your death sentence is like being a character in one of the old Bette Davis movies.

I believe I was able to withstand this shock because of my Catholic faith, to which I converted in 1998.

I then called Dr. Donald Morton of the John Wayne Cancer Institute in Santa Monica, Calif., who removed a cancer from my lung in 1994 and has been a friend and close medical advisor. He told me that different people react to serious cancers in different ways and reminded me that I was a three-time cancer survivor.

After studying my CT scan and MRI, Dr. Friedman said a resection -- that is, a removal of the tumor -- was possible by surgery. Dr. Friedman had performed a similar operation this summer on Sen. Edward M. Kennedy of Massachusetts.

In today's world, it is up to the "informed patient" to make many decisions affecting treatment. Dr. Morton recommended that I go ahead with surgery by Dr. Friedman.

My dear friend, the Democratic political operative Bob Shrum, asked Sen. Kennedy's wife, Vicki, to call me about Dr. Friedman. I barely know Mrs. Kennedy, but I have found her to be a warm and gracious person. I have had few good things to say about Teddy Kennedy since I first met him at the 1960 Democratic National Convention in Los Angeles, but he and his wife have treated me like a close friend. She was enthusiastic about Dr. Friedman and urged me to opt for surgery at Duke, which I did.

The Kennedys were not concerned by political and ideological differences when someone's life was at stake, recalling at least the myth of milder days in Washington. My long conversation with Vicki Kennedy filled me with hope.

The irony of my going to Duke to save my life can only be appreciated by somebody who knows that I am a fanatic University of Maryland basketball fan with no use for the Duke Blue Devils and their student basketball fans, who certainly have not turned the other cheek toward me.

The ingenious taunts by the students at Duke's Cameron Indoor Stadium are usually directed against opposing players, but I am one fan who also has been the target of the "Cameron Crazies." During my last visit there to watch a game won by Maryland, students raised a placard with two pictures: one of Benedict Arnold and one of me. "Two Traitors, " said the headline.

But I was treated with immense courtesy and skill by the great Duke neurosurgical team. Dr. Friedman operated on me for over four hours, starting at 7:30 a.m. on Friday, Aug. 15. He later showed me before-and-after pictures, revealing that the 3-by-1.5-inch tumor had been removed. Of course, cancer cells remain, requiring a rigorous regimen of radiation and chemotherapy, managed by the Duke team and conducted at the George Washington University Hospital in Washington.

Al Hunt, who has become a close friend, though we disagree about almost everything, says it will be very difficult for me to inveigh against Duke in the future. I do believe he is correct. Al and his wife, Judy Woodruff, have been staunch pillars of support during this ordeal and helped arrange our living accommodations at Duke.

I am now at home in Washington, awaiting further therapy. Dr. Friedman recommended that I try to get back to at least parts of my normal life. He suggested reading, but also that I try to write columns, which is the reason I've composed this piece.

There are mad bloggers who profess to take delight in my distress, but there's no need to pay them attention in the face of such an outpouring of good will for me. I had thought 51 years of rough-and-tumble journalism in Washington made me more enemies than friends, but my recent experience suggests the opposite may be the case.

But Joe and Valerie Wilson, attempting to breathe life into the Valerie Plame "scandal," issued this statement: "We have long argued that responsible adults should take Novak's typewriter away. The time has arrived for them to also take away the keys to his Corvette."

Thanks to my tumor, the Wilsons have achieved half of their desires. I probably never will be able to drive again, and I have sold the Corvette, which I dearly loved. Taking away my typewriter, however, may require modification of the First Amendment.

Support for me and promises of prayers sent for me poured in from all sides, including political figures who had not been happy with my columns. I'm told that President George W. Bush has not liked my criticism, particularly of his Iraq war policy. But the president is a compassionate man, and he telephoned me at 7:24 a.m. on August 15, six minutes before I went into surgery. The conversation lasted only a minute, but his prayerful concern was touching and much appreciated.