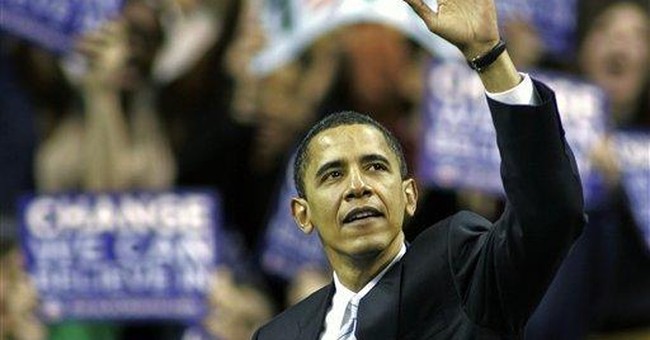 WASHINGTON, D.C. -- Which Democrat really won Super Tuesday? Thanks to the Democratic Party's proportional representation, it is not easy to say a week later. Sen. Hillary Clinton and Sen. Barack Obama ran a virtual dead heat for delegates that day in 22 states clearly stacked in Obama's favor. But the way Obama lost California raises the specter of the dreaded Bradley Effect.

Los Angeles Mayor Tom Bradley, an African-American Democrat, in 1982 unexpectedly lost his candidacy for governor of California. His defeat followed voters telling pollsters they prefer a black candidate and then voting the other way. In California's primary last Tuesday, Obama lost by a landslide 10 percentage points after a late survey showed him ahead by 13 points and other polls gave him a smaller lead.

Was this presumed 20-point reversal caused by the Bradley Effect, which has worried Democratic leaders about Obama since he became an obstacle to Hillary Clinton's majestic procession to the Oval Office? It is much too early for that conclusion, but the subject is in the minds and private comments of Democratic politicians pondering the stalemate for the party's presidential nomination.

Other than an alarming racial gap separating supporters of the two candidates, Obama escaped from Super Tuesday without obvious damage. Clinton's capture of California, New York and New Jersey gave her the big states contested that day except for Obama's home state of Illinois and, under Republican winner-take-all rules, would have put her on the way to the nomination. Instead, Obama got only a 13-delegate edge out of 1,681 delegates at stake Tuesday.

That is bad news for Clinton, who now faces a temporary drought. The next three weeks belong to Obama, with nearly all 11 delegations to be selected in his favor, culminating in Wisconsin on Feb. 19. Clinton's strategists spread the word not to worry because of Texas and Ohio, two big states presumably favorable to Clinton, on March 4. With its large Hispanic vote, Texas looks good for Clinton, and Ohio less certain.

But proportional representation rears its head. Obama strategists privately concede probable defeat in those two big states but losing their delegate competition by only 174 to 160, a pitifully small margin of 14. The Obama team's calculation after all the primaries shows Obama with 1,647 delegates and Clinton 1,580 -- both short of 2,025 needed for nomination. (This confidential information was accidentally e-mailed to Bloomberg News, which published it.) The issue could be settled by unelected, unpledged super-delegates, or a credentials fight over Florida and Michigan, who were stripped of delegates for scheduling their primaries too early.

Going into a convention with the nominee unknown for the first time since 1952 upsets Democratic insiders not merely because of the uncertainty. Splitting the party along ethnic and racial lines is troubling -- especially in California, where massive Latino support for Clinton cancelled Obama's black base.

However, disbelief in racial prejudice by their voters leads Democrats to reject speculation that they lied to pollsters in claiming to support Obama. The Zogby poll showing a big Obama lead in California and the Suffolk and Rasmussen surveys indicating a slight edge, it is argued, were just plain wrong. It is also claimed that the state's final tally was skewed by an unexpectedly low African-American vote.

But early evening Tuesday briefings on exit polls, the product of nonpartisan technicians, cautioned the listeners not to be carried away by favorable Obama numbers around the country because his actual performance often is overstated by exit polls. (Indeed, contrary to early exit poll signals of an Obama upset in New Jersey, Clinton carried the state comfortably.) No explanation was given for this aberration, but many listeners presumed it was the Bradley Effect.

As much as the Democratic stalemate delights the news media, worried party leaders still hope that Clinton or Obama will break away in the popular vote before the party convenes in Denver late in August, even if neither achieves a majority of delegates.

Howard Dean, who was elected chairman of the Democratic National Committee after the 2004 elections in a rare manifestation of internal party democracy, let it be known he would be happy to mediate with the two candidates and pick a nominee in March or April. It was occasion for laughter in both the Clinton and Obama camps.