Gunning for ‘The Cowboy Way’

Robert Knight
|
Posted: Mar 19, 2019 12:01 AM
Share   Tweet
The opinions expressed by columnists are their own and do not necessarily represent the views of Townhall.com. 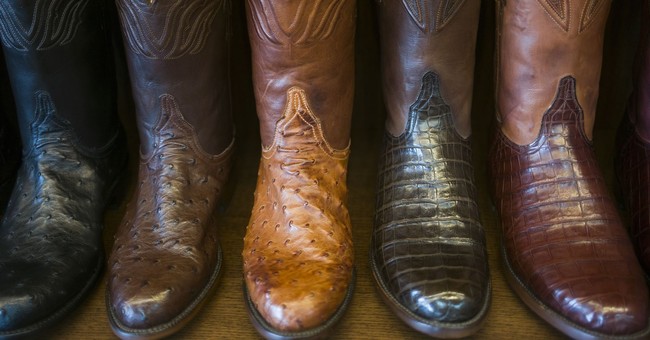 In 1949, as part of its “Riders in the Sky” promotion, a film studio released Gene Autry’s 10-sentence Cowboy Code.

The code resurfaced in 2007 in a biography of the movie star by Holly George-Warren, a prolific chronicler of America’s popular culture.

The reason it’s included below is because cowboys are being thrown under the horse, along with “farting cows.”  They’re the latest targets of the political correctness that seeks to replace American grit with a nihilistic creed of wimpery.

Actually, it started years ago when leftists thought they had delivered a roundhouse punch against Ronald Reagan, and later, George W. Bush, by deriding them as “cowboys.”  That made the two men rugged icons to many Americans.

The same cultural vandals made another stupid mistake by dismissively dubbing Reagan’s Strategic Defense Initiative “Star Wars.” They actually thought that linking the high-tech missile defense system to one of the most popular movie franchises of all time would help kill it.

Now, in Orange County, California, tin-ear activists are seeking to rename John Wayne Airport and remove the Duke’s statue over fatally “insensitive” remarks he made in 1971. It’s only a matter of time before they demand that all copies of his movies be burned in a cleansing ceremony, along with anything Thomas Jefferson wrote.

Meanwhile, the University of Wyoming is facing a leftist uprising over its slogan, “The World Needs More Cowboys.”  The sports teams have long been called the Cowboys. Wyoming’s license plates feature a cowboy on a bucking bronc, and Cheyenne boasts one of the world’s most famous rodeos.

Nonetheless, the slogan should be “shelved” according to the UW Committee on Women and People of Color, and replaced with one that “represents the diversity of the people and cultures” at the college. Like what, “The World Needs More Non-Binary Cowpersons?”

“I am not the only person for whom the word ‘cowboy’ invokes a white, macho, male, able-bodied, heterosexual, U.S.-born person,” associate professor of kinesiology and health Christine Porter told the student paper, the Boomerang, as reported in Campus Reform.

“The history of cowboys, of course, is much more diverse than that racially, and presumably also for sexual orientation,” she conceded. “But the image—what the word ‘cowboy’ means off the top of almost everybody’s head in the U.S.—is the white, heterosexual male.”

Can’t have that, even if the sheepherder film “Brokeback Mountain” was supposed to save cowboys from stereotyping as incurable straights.

If they could just get enough power, the cultural vandals would wipe out all mention of white males in U.S. history – except for the self-hating ones in today’s Democratic Party, including the Virginia governor and attorney general who appeared in blackface but, well, they’re Democrats, so all is forgiven.

Why would anyone stay in a party where you’re told that your very existence is a detriment? For that matter, why would black Americans stay in a party that has kept them in economic bondage and patronized them for decades?  Here’s to the #WalkAway movement.

Getting back to self-hating white males, former U.S. Rep. “Beto” O’Rourke of Texas, who in real life is Robert Francis O’Rourke, has made it clear he’s okay that his whiteness is a disadvantage. “The government at all levels is overly represented by white men,” he told Vanity Fair. “That’s part of the problem, and I’m a white man…. Almost every single one of our presidents has been a white man. And [people] want something different for this country.  I think that’s a very legitimate basis upon which to make a decision.”

Really? What a chump Martin Luther King Jr. must have been, going on about the importance of character.  Democratic white males need to do some public self-loathing early and often and hope that it shields them.  I think Joe Biden still needs some work.

America has not always been aswarm with institutionalized insanity.  Here’s the Cowboy Code:

The university says it plans to stick with the cowboy campaign. Officials are “undaunted,” emphasizing that the term evokes ‘the spirit of the cowboy that we all kind of share in.’”