Robert Knight
|
Posted: Oct 02, 2018 12:01 AM
Share   Tweet
The opinions expressed by columnists are their own and do not necessarily represent the views of Townhall.com. 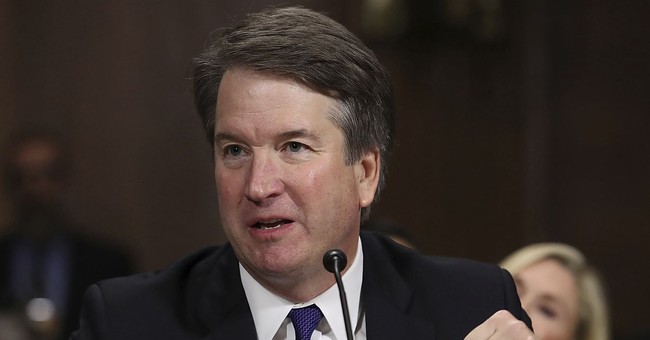 Viewing Republican senators and their hired female lawyer impersonate a nervous bomb squad during Christine Blasey Ford’s testimony last Thursday, I couldn’t help but think about Proverbs 18:17, which counsels patience in such matters.

“The first one to plead his cause seems right, until his neighbor comes and examines him.”

Sure enough, when Brett Kavanaugh took the witness seat and gave his angry, passionate and thoroughly believable defense against her decades-old charge of teenaged sexual assault, the tables turned.  You might even say the current Supreme Court nominee matched Clarence Thomas’s furious counter charge in 1991 of a “high-tech lynching.”

The Democrats’ latest tactics are pathetic.  Sen. Dianne Feinstein has actually tweeted that Judge Kavanaugh lacks judicial “temperament” because he refused to be docile and calm during their attempted assassination of his character.  I think the technical charge is “insufficient diffidence.”

They are also attacking the FBI probe, saying that it is not wide enough.  You know, they want it to be like the Mueller probe, which is now deep into Trump’s sock drawer and his purchase of a movie ticket to see “Dr. Zhivago” back in 1965.  Finally, they want the American Bar Association to reopen its vetting of Mr. Kavanaugh, to whom they gave the highest rating.

In perhaps his finest moment, Lindsey Graham, South Carolina Republican, exposed the whole charade as a cynical “sham” to delay the Senate vote until after the November 6 midterm elections.  Vulnerable Democrat senators do not want to go on record.

Feinstein, the ranking minority leader on the Judiciary Committee, sat on Ford’s explosive allegations for weeks while arranging for her to obtain an attorney known for Democratic activism.   A letter sent by Ms. Ford only to her congresswoman, Anna Eshoo (D-California), and Mrs. Feinstein somehow got leaked to the press.

Sen. Feinstein professed no knowledge of how this could have happened.  She mumbled something about reporters “asking questions,” but they wouldn’t have been doing so if the letter had not been leaked.  Dr. Ford had asked for confidentiality.

Meanwhile, the Democrats again absurdly accused President Trump and the GOP of “rushing” the process, even though the Supreme Court nominee had submitted four times the total number of documents of all previous nominees combined, had been vetted by the FBI, given the top rating by the American Bar Association and was well beyond a typical vetting period.  Leading the pack was Sen. Richard Blumenthal (D-Connecticut), who accused President Trump of a “coverup” for not ordering an FBI investigation.

We can understand why the Republicans hired Arizona lawyer Rachel Mitchell to question Dr. Ford.   The Democrats and their media were itching to portray a gang of white men abusing a poor, female victim.  It wouldn’t have mattered what they said or did.

Ms. Mitchell, working in five-minute segments, did establish a couple of sizable holes in Dr. Ford’s credibility.  The first was Dr. Ford’s stated reason for declining to come to Washington on Monday to testify to the committee:  She was afraid to fly.   Ms. Mitchell established that Dr. Ford not only flew all over the country routinely but had taken international flights.  The unasked follow-up question could have been: “I’m puzzled.  You said you could not come here when invited earlier because you had a fear of flying.  Yet you fly often.  Why did you say that?”

In another under-explored point, Dr. Ford said she took a polygraph test on the day of her grandmother’s funeral.  Then she said it might have been the next day; she wasn’t sure.  Would you remember whether you performed such a task on the day of your grandmother’s funeral less than two months ago?  Yet we are supposed to believe her account of what happened in 1982 against a man who has shown no evidence of a dastardly nature.

I have no inner knowledge of Republican strategy, but I would guess they thought Judge Kavanaugh’s own testimony would be so compelling that it would win the day without beating up on Dr. Ford’s credibility.  Maybe they were right.

Democrats did seem perplexed about how to attack after Judge Kavanaugh’s forceful denials, in which he cited unanimous refutations of Dr. Ford’s accusation by the only witnesses she cited.

So, they tried unsuccessfully to turn the judge into a stumbling, 17-year-old drunk who could not remember sexually assaulting a 15-year-old girl.  It didn’t work.   The judge admitted to drinking beer as a teen and in college, but fiercely denied ever “blacking out” or failing to remember what he did the night before.   Try as they might, the Democrats caught him in no contradictions.