Has the Revolution Begun Eating Its Own?

Robert Knight
|
Posted: Oct 10, 2017 12:01 AM
Share   Tweet
The opinions expressed by columnists are their own and do not necessarily represent the views of Townhall.com. 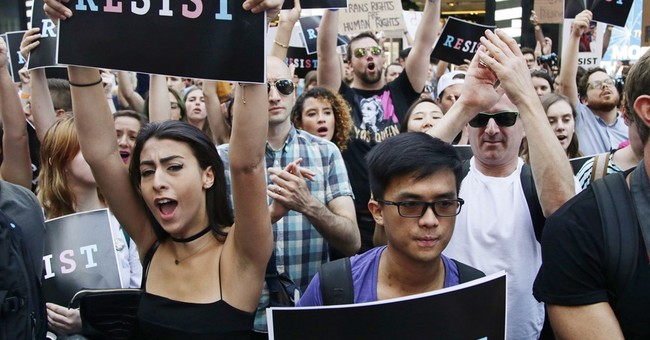 At a forum at William & Mary College on September 27, the ACLU got a sample of what conservatives have been experiencing on campuses for years.

As Claire Gastañaga, executive director of the ACLU of Virginia, began speaking to a small audience, a group of demonstrators marched in with a large banner that said, “Blood on Your Hands.” They lined up in front of the stage, holding placards.

Apparently clueless about what was about to transpire, Ms. Gastañaga said, “Good. I like this. Good.”

She went on to say that she was going to inform the students about their right to protest, “which this illustrates very well.”

No, it didn’t. The students shut her down. They began loudly chanting inane slogans, including “ACLU, you protect Hitler, too!” and “ACLU, free speech for who?” and “The oppressed are not impressed!” The ACLU is also apparently guilty of perpetuating a system of “white supremacy” for not defending jackboot tactics like those seen at Berkeley and Middlebury College against conservative speakers.

What was supposed to be a #blacklivesmatter event was populated almost entirely by white students, presumably many from the W&M’s tony Williamsburg campus. Oppressed, they are not, unless you count the unbearable minutes when they can‘t find a parking space for their Audis or Beamers.

For a taste of what Ms. Gastañaga endured for more than an hour and a half, you can see a brief video by an American Civil Rights Union (ACRU) team that filmed the event. It’s strangely satisfying.

Since the French Revolution, when it was famously observed that “revolutions devour their own,” the progressive Left always seems surprised when the forces they have unleashed turn on them. Think back to the 1968 Democratic National Convention in Chicago, when old-line liberals like Vice President Hubert Humphrey were stunned by the street violence of the extreme Left.

More recently, House Minority Leader Nancy Pelosi had that deer-in-the-headlights look when the Antifa crowd, like the Occupy movement a few years ago, turned utterly violent. To her credit, she finally denounced their tactics.

In a more serious venue than campus playpens, the ACLU had another sobering experience this past week. During arguments on Tuesday in Gill v. Whitford, several Supreme Court justices indicated a reluctance to plunge into what Felix Frankfurter in 1946 called the “political thicket,” which is where the ACLU wants them to go. It’s part of the ACLU’s vision to do away with the state and local powers that still hamstring the federal government’s relentless growth.

A split federal panel had invalidated Wisconsin’s redistricting plan for its state legislature, calling it an unconstitutional gerrymander because the Republican-controlled legislature had drawn districts favoring the Republican Party.

The ACLU filed an amicus brief in the case, arguing essentially that legislatures, being composed of politicians, should not have the authority to create voting districts. It's time to change the rules of the game since the vast majority of state legislatures are now controlled by Republicans.

The ACLU had no such problem when Maryland’s Democrat legislators in 2011 drew a bizarre district that meandered from the conservative Western part of the state to liberal Montgomery County. This was intended to unseat outspoken conservative Republican Rep. Roscoe Bartlett. It worked. Mr. Bartlett had won the 6th district by 28 points in 2010 but lost his seat by 21 points to Democrat John Delaney in 2012.

In progressive California, the politically-drawn district maps are so squiggly that they resemble Rorschach blots. But any court-ordered “solution” for redistricting would be an ongoing nightmare, with unelected, unaccountable bureaucrats in control.

Who would appoint the “non-political” panels? How would they determine exactly how many voters of either party or no party should be included in each district? Would distinct communities be split for numerical balancing? Would they do this after every election? How much politics is too much politics?

Apart from the difficulties, the whole thing would be unconstitutional. On August 4, the American Civil Rights Union submitted an amicus brief in Gill, noting that the Constitution gives Congress the power to determine the “Times, Places, or Manner” of holding federal elections but leaves to the states the power to determine who votes. Therefore, establishing districts comprising voters is a state function, not a federal one.

Since the 1960s, the courts have variously waded into the issue, solidifying the principle that there is no place for racial bias in districting, but avoiding a sweeping “solution” to political gerrymandering.

On May 22, in a dissent in Cooper v. Harris, Justice Samuel Alito alluded to Frankfurter’s famous statement and warned against making federal courts “weapons of political warfare,” which would “invite the losers in the redistricting process to seek to obtain in court what they could not achieve in the political arena.”

Speaking of losers, as the ACLU ramps up its campaign against voter ID laws, traditional districting methods and other obstacles to its goal of fundamentally transforming America, its unruly children will be out in the streets in black masks, trying to intimidate anyone who disagrees with them.

When the ACLU itself comes under attack for not joining the mob, it’s a sign that the revolution has begun nibbling on its own.