Robert Knight
|
Posted: Mar 08, 2016 12:01 AM
Share   Tweet
The opinions expressed by columnists are their own and do not necessarily represent the views of Townhall.com. 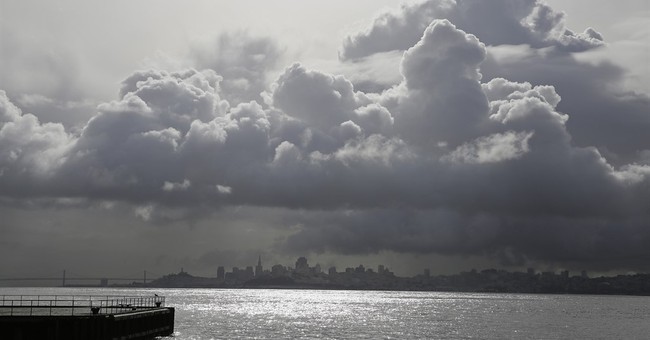 Ever wonder why the news is so depressing?

Except for a rare human interest story or a scientific breakthrough, the news is rife with crime, economic misery, terrorism, war, cultural insanity, pathos and political posturing.

Right now, we seem to be heading right toward a cliff or a whirl on Mr. Toad’s Wild Ride.

No one tunes in to see a happy, intact family sit down for dinner.  Well, maybe at the end of a
“Waltons” re-run or a “Blue Bloods” episode.  But those are fictional.

We’re talking news here, which by definition is 95 percent negative or bizarre. Plus, way too many government-declared “crises,” which the media are only too happy to magnify.

The tendency toward sensationalism, especially violence, is summed up nicely by the well-known phrase, “If it bleeds, it leads.” No one’s quite sure who coined it. Answers.com says the phrase surfaced in a Broadcasting magazine article in 1982, was cited in TV Guide in 1983, and was popularized by New York magazine in a 1989 article by Eric Pooley titled "Grins, Gore, and Videotape - The Trouble with Local TV News."

Here’s Mr. Pooley’s signature quote: "The thoughtful report is buried because sensational stories must launch the broadcast: If it bleeds, it leads."

It’s true, even for national news. A steady diet of this is hazardous to mental, emotional and spiritual health. Heck, listening to even five minutes of certain politicians’ televised stump speeches is enough to have you reaching for the Maalox.

I once worked with a wonderful colleague who kept on TV news in her office all day long.  Periodically, she’d appear in my doorway, place her arms on either side of the frame, and shake her head while muttering or shouting, “Morons!”

Unfortunately, she was never wrong.  But I did caution her to turn off the news once in a while so both of us could regain a semblance of sanity.

And that’s why the rest of this column won’t be about bad stuff. If you’re addicted to the steady flow of negativity, you’d best move on.

First, baseball is back.  Spring training is in full swing. People are walking around humming John Fogarty’s joyful anthem, “Centerfield,” or “Take Me Out to the Ballgame.”

A dear, departed friend who was a diehard Phillies fan referred to the period between the last out of the World Series and the first pitch of Opening Day as, “The great ellipsis.” He was not into other sports, so he went into hibernation, aroused only rarely – “They traded Bullfrog!  I don’t believe it.”

The sports sections once again are full of baseball talk. It’s not as good as when the season actually gets underway in early April, but the ice is cracking in the creek. For non-sports fans, there’s always. … I don’t know. Fashion?

Daylight Savings begins on Sunday, March 13 and runs until Sunday, November 6.  Millions of commuters who leave before the sun rises and return after dark will have a fighting chance to see sunlight.  They will stagger into the late afternoon rays like moles, blinking and smiling.

When someone who just consumed lots of bad news says we’re living in the worst of times, ponder the wonders of indoor plumbing and modern medicine, especially dentistry.  Would anyone like to go back before Novocain and X-rays?

Finally, there are a lot of positive vibes going on if you know where to look. Veterans get standing ovations at public events. Supermarkets are still full of every kind of food under the sun, and gasoline has dropped under $2 a gallon. Neighbors are helping neighbors.  Random acts of kindness abound.  People are living longer.

Despite a relentless cultural assault on America’s founding values, the nation is still chugging along on the fumes of inherited virtues, such as faith, patriotism and personal responsibility.  America is the envy of the world, and though our shining light is tarnished, many candles of hope are being lit.

Passover is coming, along with Easter, the personification of Good News, which is what Gospel means. Nothing could be better news than being told that a loving God has made the ultimate sacrifice to free us from our own misdeeds and mistaken human expectations.

Need a shot of love? A remarkable piece of video was taken on Feb. 6 in Tennessee. It’s the last minute of a high school basketball game in which Franklin Road Academy’s team manager, Robert Lewis, who has Down syndrome, is in uniform on the court. As the crowd chants “Money Robert,” he gets the ball and goes up for the last shot of the game, a three-point attempt from the corner.

You can easily Google the video to see what happens. It just might make your day