ACLU Kicks God Out of School in Ben Franklin’s Backyard

Robert Knight
|
Posted: Jan 12, 2016 12:01 AM
Share   Tweet
The opinions expressed by columnists are their own and do not necessarily represent the views of Townhall.com. 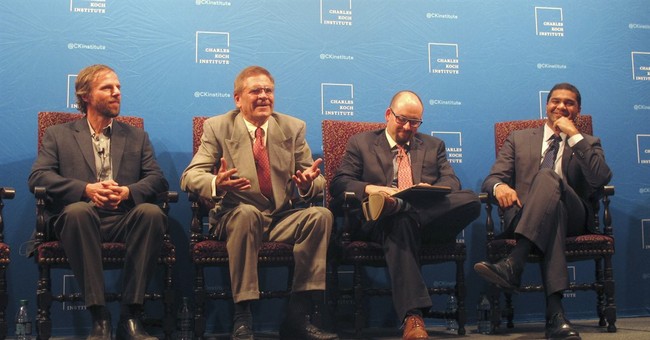 Its website has a link to the 79-page, state-issued, anti-bullying guidelines. So far, so good. But the school had not bent entirely to PC fashion. After each recitation of the Pledge of Allegiance, the pupils recited the words, “God bless America.”

Although this was not a required action, the school had been doing it to honor fallen first responders and victims of the September 11, 2001 terrorist attacks. The school is less than 100 miles from lower Manhattan, where the World Trade Center was leveled by jets hijacked by Islamic jihadists.

All was well for 14 years until someone tipped off the American Civil Liberties Union. The ACLU swooped down in late December to make sure that the schoolkids were spared the common phrase uttered routinely by most public officials and all U.S. presidents up to and including Barack Obama.

In a December 30 letter, Ed Barocas, legal director of the ACLU’s New Jersey chapter, called the practice of reciting “God bless you” in a public school "unconstitutional." He did stop short of calling it “diabolical.”

Fearing a costly legal battle, Principal Sam Sassano explained in a letter to parents that the school will discontinue the adult-led recitation and "explore alternative methods of honoring the victims and first responders of the 9/11 tragedy."

Children at the 265-student school will be permitted to say the phrase on their own after the Pledge, he noted. So the ACLU has not managed to enforce official atheism during every moment that the children are in school. But that’s the ultimate goal – to make religion irrelevant outside homes, churches and in the public square and thus create a de facto establishment of atheism as America’s official religion.

Since 1963, when Madalyn Murray O’Hair won a Supreme Court decision to bar Bible reading in government schools, millions of schoolchildren have grown up utterly ignorant of the most influential text in world history. It might help to explain why we find ourselves drowning in a surging sea of personal and institutional lawlessness that threatens the very foundations of American liberty.

Barocas’s letter to the school attorney included this tutorial: “The Establishment Clause of the First Amendment to the United States Constitution prohibits the government not only from favoring one religion over another, but also from promoting religion over non-religion."

That would have been news to Benjamin Franklin, whose invocation of prayer turned around the stalled constitutional convention in Philadelphia in 1787. Here’s an excerpt of Franklin’s words, as recorded in his own handwriting and found in James Madison’s journal:

“In the beginning of the Contest with G. Britain, when we were sensible of danger we had daily prayer in this room for the divine protection. Our prayers, Sir, were heard, and they were graciously answered. All of us who were engaged in the struggle must have observed frequent instances of a Superintending providence in our favor. To that kind providence we owe this happy opportunity of consulting in peace on the means of establishing our future national felicity. And have we now forgotten that powerful friend?

“I have lived, Sir, a long time, and the longer I live, the more convincing proofs I see of this truth – that God governs in the affairs of men. And if a sparrow cannot fall to the ground without his notice, is it probable that an empire can rise without his aid? We have been assured, Sir, in the sacred writings, that ‘except the Lord build the House they labour in vain that build it.’ I firmly believe this; and I also believe that without his concurring aid we shall succeed in this political building no better than the Builders of Babel.”

In the biblical account of the Lord’s destruction of the Tower of Babel (Gen. 11), the arrogant men building it were rendered confused and helpless, babbling in numerous languages.

It would be nice if the ACLU learned how to babble in a language that was not relentlessly hostile to public expressions of faith.