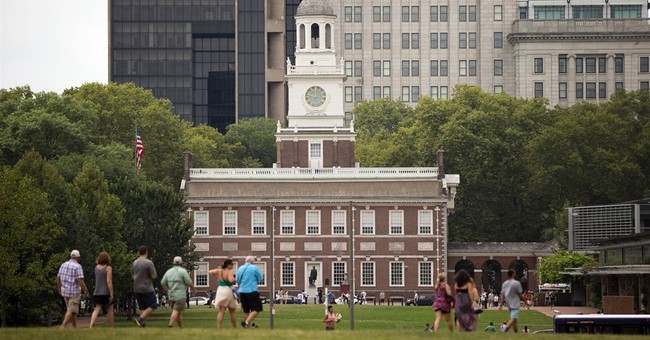 Not a day goes by when the social engineers of the Left are not remaking America in their own image.

In his new book “The Snapping of the American Mind,” author David Kupelian observes that, “The Left never tires of manipulating Americans’ historical national guilt over slavery and segregation, persistently keeping the fires of guilt and shame alive in present-day Americans for sins committed generations ago by people long since dead.”

Accordingly, New York Mayor Bill de Blasio has announced that he is placing portraits of slaves and abolitionists around the picture of George Washington in the Gracie Mansion. An early report from an NBC affiliate said that he had removed Washington altogether, but the mayor insists that he is just adding imagery. If the first report was true, then I, for one, would be happy to take off his hands any $1 bills bearing our first president’s image that he can’t stand to keep in his pocket.

Another case in point was last week’s annual trashing of Christopher Columbus, with a growing list of jurisdictions that have replaced Columbus Day with Indigenous Peoples Day.

While reading about various denunciations of Columbus combined with celebration of native cultures, I looked in vain for contributions of these earlier civilizations to our current wellbeing.

It turns out that the hated Western civilization that Columbus brought to the New World in 1492 is entirely responsible for painless dentistry, electricity, indoor plumbing, surgery, life-saving drugs, air conditioning, computers, air travel, non-stick frying pans, pogo sticks, automobiles, ever-increasing life spans, plus private property and the freedoms of religion, speech, press, assembly, voting and all the other individual rights secured by a written Constitution.

America also weathered a Great Depression, won two world wars, put men on the moon, led the fight for freedom against communism, and helped spread Christianity around the world.

America’s dark side includes slavery, a civil war, a Jim Crow system, and the way the government brutally mistreated and displaced many Indian tribes in the name of the Manifest Destiny of a coast-to-coast nation. Because Native Americans had not encountered certain diseases that the Europeans brought with them, they had no immunity, and many died. This was awful, but it was not deliberate genocide, any more than the mass deaths of Europeans when Asian invaders brought new diseases with them.

Unfortunately, students across the country are being miseducated in American history by the Marxist propagandist Howard Zinn, whose “A People’s History of the United States” is intended to induce shame instead of pride in the hearts of young Americans.

In his 2014 hit documentary, “America, Imagine a World Without Her,” Dinesh D’Souza took Zinn and other leftists to task, supplying needed correctives. Yes, America had slaves, but so did Native American tribes and peoples on every continent. Except for areas today dominated by militant Muslims, slavery has been eradicated largely through Western influence led by Christians such as England’s William Wilberforce and American abolitionists.

President Thomas Jefferson dispatched the U.S. Navy to stop Muslim pirates from capturing American ships off North Africa and turning Christian captives into slaves. Speaking of pirates, it was the Muslims’ shutting off of the Eastern overland trade route to China that helped spark Spain’s sponsorship of Columbus’s quest for a Western sea route that led him to America.

With all its faults, America is still the place where even its detractors choose to live, enjoying modern conditions and freedom that are the envy of the rest of the world. The very idea of hypocrisy doesn’t seem to cross the malcontents’ minds.

The leftist website Think Progress began its piece about Columbus Day by complaining that, “it glorifies a man who launched a large-scale genocide and European colonization.”

One wonders where those Think Progress folks would rather live. If they pine for a distant, undeveloped paradise in Africa, South America or Asia, why they don’t pack up their bicycles and take off for the nearest cruise line or airport?

In Bridgeport, Conn., where a statue of Christopher Columbus was vandalized, the school board voted unanimously last Monday to change Columbus Day into Indigenous Peoples Day because, as one board member said, “Columbus didn’t find anything. There were already people here.”

At Harvard, the celebration of Indigenous Peoples Day was centered at Matthews Hall, which the Crimson reports, “roughly marks the location of Harvard's Indian College, which existed from 1655 to the 1690s. The founding Harvard Charter of 1650, which established the Harvard Corporation as Harvard’s governing board, dedicates the College to ‘the education of the English and Indian youth of this country, in knowledge and godliness.’”

Harvard’s founders regarded sharing the eternal-life-giving Gospel of Jesus Christ as the greatest gift they could impart to Native Americans. Not so the many Zinn-taught, America-hating academics today at Harvard and other campuses. They see only an evil exercise in cultural hegemony, with Christianity displacing the more enlightened pantheism and worship of Mother Earth.

Upon arriving in what is now part of the Bahamas, Columbus recited the prayer that he and his crew said daily on their voyage: “Blessed be the light of day, and the holy cross we say; and the Lord of verity, and the Holy Trinity.” Then he planted a cross in the ground.

Multiculturalism’s proponents seem less animated by appreciation for native cultures than hatred of America as an extension of Christianity and Western civilization.