GOP Fiddles While We Sink Into Tyranny 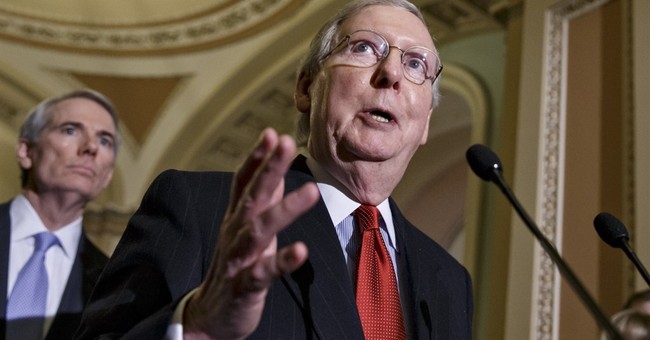 What, you thought that with Republicans taking that chamber in January following the historic November election that Mr. McConnell is Majority Leader?

No, that would be Harry Reid, the once and former Democratic Majority Leader, who obviously still calls the shots in the World’s Greatest Deliberative Body.

There’s no other way to explain the Republican-dominated Senate’s 68-31 vote passage of a bill funding the Department of Homeland Security (DHS) without addressing President Obama’s illegal granting of amnesty to five million illegal aliens. Faced with the usual Democratic threat to “shut down” the agency and blame it on Republicans, Mr. McConnell tried several times to get the House bill past a Democrat filibuster, but then blinked, promising to deal with amnesty on a separate bill that has no leverage because it’s not part of a must-pass budget bill.

It didn’t take a crystal ball to have seen this mess coming back in December, when Republican leadership acquiesced to the $1.2-trillion, budget-busting “Cromnibus,” ignoring Obama’s illegal amnesty and promising to raise it in February in the Homeland Security bill.

This “strategy” threw the Democrats another big, fat softball right over the plate. It allows them to blame Republicans for risking the nation’s security by not funding a “clean” Homeland Security bill. As Islamic extremists burn, behead and crucify Christians and moderate Muslims all over the Middle East, what better backdrop could the Democrats have for their disingenuous power play? It didn’t hurt their case that a Somalian terrorist group has threatened to blow up Minneapolis’s Mall of America, or that FBI Director James Comey recently said that terrorists are now active in all 50 states.

The House passed a perfectly good Homeland bill, minus funding for Mr. Obama’s amnesty scheme. Harry Reid smiled and scurried to his secret cupboard to press the big, red panic button. Within minutes, Democratic leaders and the media (a redundancy, I know) screeched and whined that the GOP was leaving America defenseless at a critical time. Although Senate Democrats held up the bill’s passage, Republicans got the blame.

The last time this happened was in September 2013, when Ted Cruz filibustered Obamacare. The GOP was smacked for “shutting down the government” and the party’s brand was supposedly ruined. In November 2014, however, Republicans swept the election by historic margins. You’d think they’d learn that this briar patch is not a bad place to be thrown.

Besides, since 85 percent of DHS’s 231,000 employees are considered “essential” and would not be furloughed, based on the last “shutdown,” it would not leave the nation defenseless.

President Obama poured salt on the wound by declaring that he would ignore a federal judge’s injunction in Texas halting his amnesty order. He did this after saying at least 22 times that he did not have the power to grant amnesty. Then he threatened to veto any bill that defunds amnesty, and topped it off by announcing that he was assuming new, uncharted powers:

“What we’ve done is we’ve expanded my authorities under executive action and prosecutorial discretion as far as we can legally under the existing statute, the existing law. And so now the question is, how can we get a law passed?”

But who needs a law when you can ignore not only Congress but the Courts?

Speaking of tyranny, Mr. Obama’s Federal Communications Commission (FCC) on Feb. 26 voted 3-2 to seize control of the Internet, citing federal regulation of telephones and broadcasting. Congress pointedly has refused to grant executive authority over the Internet, and a federal judge ruled sharply that the FCC has no power in this area. Have you heard any significant outcry from congressional leaders over the FCC’s granting itself these sweeping new powers?

The ball is in the Republican-led Congress’s court to rein in the Obama Administration’s constant assertion of new “authorities.” They can do so by denying funds for unconstitutional actions, but they must not be outfoxed yet again by Democrats, who actually play to win.

Republicans could sit back and wait until 2017. By that time, who knows how much more power the White House will have grabbed? Mr. Obama could be dreaming about nationalizing “essential” assets. Who would stop him?

Can House members get over their fear of false charges of racism and utilize the Constitution's Article I, Section II solution for a lawless president?

Or perhaps they can find new, clever ways to surrender to the growing autocracy.