As the Elites Celebrate, the Resistance to Obamacare Begins 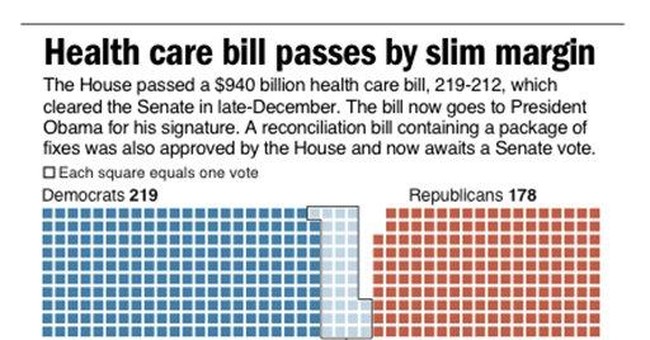 There were undoubtedly lots of hangovers in Washington, D.C. on Monday morning, remnants of the packed saloons the night before. Washington’s socialists (read: Democrats), giddy with victory over the House voting 219-212 to pass Obama’s government takeover of health care, could barely contain themselves.

Happy footage abounded on the government mouthpiece networks the next morning (CBS, NBC, ABC, CNN, MSNBC). By contrast, Tea Party protesters were shown in the worst light. The Washington Post ran a front page analysis by Dana Milbank calling the crowd “unruly” and “a hideous display, capping one of the ugliest and strangest periods of the American legislative process: the town hall meetings, the death panels ….” In other words, leave policymaking to your betters. Shut up and take it.

The bill, which passed without a single Republican vote, goes directly to the president, who will sign it this week, thus placing another 17 percent of the nation’s economy under government control and paving the way for a socialist remaking of what has been the finest health care system in the world. Then, he’ll take a victory tour around America for a few days to explain why this is good for us. He’s just not had enough airtime, you see. Of course, it doesn’t matter whether we like it or not. The polls consistently pointed in one direction over the past weeks, with a healthy majority of Americans saying “kill the bill.”

The House and Senate are jockeying over the “fix-it” legislation, which is supposed to remove some of the more onerous provisions. But don’t count on it. Abortion funding, for example, won’t be touched. That’s because Obama promised Rep. Bart Stupak (D-Mich.) that he would issue an executive order prohibiting the use of federal funds for abortion. Stupak caved and led enough other representatives to put the bill over the top. His office also suddenly announced Friday a $726,409 federal infusion for three airports in his district. Wow. How did that happen? An Internet campaign is underway to send Mr. Stupak sets of 30 pieces of fake silver. They should probably include a copy of the executive order that he can frame, but it won’t have much shelf life.

As the Wall Street Journal’s Kimberley Strassel reports, “The order won’t change the Senate legal language – as pro-choice Democrats publicly crowed within minutes of the Stupak deal. Executive orders can be changed or eliminated on a whim.”

House leaders did abandon the ill-conceived idea to “deem” the Senate bill passed without a vote, a parliamentary trick so odious that the public outcry reached even Nancy Pelosi’s tin ear. After days of bribes and threats behind closed doors, however, she and other House Democratic leaders marched triumphantly to the Capitol, grinning all the way. Carrying a giant gavel, she was making history, and loving it! Those people over there, waving signs and calling them “commies” and “socialists?” Oh, just some extremists. Poor babies. Poor babies.  (That’s how she described former Rep. Eric Massa (D-NY), a previous “no” vote who had resigned over exquisitely timed allegations of unseemly conduct with male aides.)

On Sunday evening, somber Americans gathered in small groups and boarded buses as they prepared to return to their home states. They were among thousands who took part in Saturday’s and Sunday’s rallies to protest the $2.4 trillion health care bill. The Washington Post’s Website predictably reported only “hundreds” took part, and featured mostly footage of shrill voices, plus posters of Obama as Hitler.

On Sunday evening, my wife and I were in the Cracker Barrel in Manassas, Virginia, sitting across from four men of varying ages, who were wearing shirts with the slogan “Born Free, Taxed to Death.”

They were Tea Party members from Georgia, and they were dead serious about what needs to be done. They took a moment to pray over their food. Then they were back discussing the coming political battles. One of them, Jack Smith of the Tea Party of Gilmer County, lamented that “only 10,000 showed up today. We needed a million. We’re going to need 60 million to take the country back.”

Did I note that these guys are very serious? Their determined expressions must not be unlike those worn by the patriots at Concord Bridge on April 19, 1775, who notched the first victory of the American Revolution.  The Georgia men said that the America they know and love is slipping away, and they aren’t about to sit around and watch it happen. They said that both major political parties had better turn it around and repeal this mess or else be turned out in November.  I told them that nine states have language allowing a broad recall of elected officials, and that petition efforts are already underway against U.S. Senators in New Jersey and Louisiana. More information can be found at RecallCongressNow.org. The Georgia men liked the idea of sending a message far before November.

Likewise, state officials are also not waiting for the federal hammer to fall. Virginia became the first state to pass a bill declaring it illegal for the government to require individuals to purchase health insurance. Idaho quickly followed.  Similar legislation is pending in 37 states. Virginia Attorney General Ken Cuccinelli has said he will file a lawsuit challenging ObamaCare as soon as Obama signs it. Attorneys general in several other states are moving to do so, as well.

The ObamaCare takeover was accomplished by some of the most open bribery ever seen. Three examples:  In the Senate, after it was reported that $100 million in federal funds brought around Sen. Mary Landrieu (D-La.), she took to the Senate floor to boast that it was, darn it, $300 million. Now get it right! Rep. Jim Costa (D-Calif.) openly boasted that his yes vote was bought in an Oval Office meeting at which he demanded that the Obama Administration increase water to his district in Central California. Sure enough, on Tuesday, the Interior Department announced a gusher, enough to provide 25 percent of the farmers’ needs instead of the expected pre-Costa/Obama confab of only five percent.  Rep. Bart Gordon (D-Tenn.) flipped to a “yes” vote after another $100 million was promised in Medicaid money for the Volunteer State, the Wall Street Journal’s Strassel reported.