Show Me the Bill! 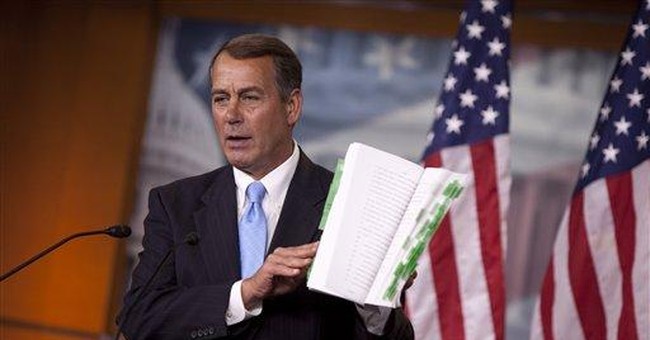 Do you think Congress should vote on bills without reading them? How about voting on bills that don’t even exist yet, except in fragments?

The Senate Finance Committee is poised to vote on a massive health care reform bill on Tuesday allegedly authored by Sen. Max Baucus (D-Mont.). A glaring, outrageous, unreported fact is that the bill’s actual text has been kept secret. No one actually knows what’s in it – not even the senators who will be told to vote for it.

Perhaps the Nobel committee will award President Obama another prize to share with Harry Reid and Nancy Pelosi, for “imagination in medical financing.”

Bits and pieces are leaking out, but entire sections will be added later. That’s what happened with the House version. Nobody read the bill, and 75 “phantom” amendments were added after the vote. A similar maneuver happened in the Senate when a key committee approved another version of a sweeping health care bill in July without seeing the text. Actual language was unveiled months later in September.

In short, senators will follow recent precedent and be voting on something that does not even exist yet.

Even the Congressional Budget Office, which issued a report this week saying the Baucus plan would cost under $900 billion instead of more than a trillion, was operating without actual text. When the CBO crunched the detailed, 1,018-page House version this summer, it reported that it would cost far more than President Obama claimed. Obama then broke precedent and summoned the CBO director to the White House for a “talk.” Now the CBO says the Senate bill will cost less. They think. They hope. They speculate.

What’s more, CNSNews.com reports that an aide to Sen. Harry Reid said that current debates may be irrelevant because an entirely different version might be inserted into an unrelated House tax bill, HR 1586.  That’s the measure that levies a 90 percent tax on bonuses given to executives of firms that receive bailout money. Among other things, this could be a way of getting around the constitutional requirement that all tax bills originate in the House.

Sen. Reid continues to insist that he wants a “public option” that would lead to a “single-payer” system, which means the end of private insurance and the dawn of socialized medicine.  Just ask Barney Frank. House Speaker Nancy Pelosi said this week that she has the votes necessary to ram through a bill with “the public option” as soon as it comes back to her chamber.

“The real bill will be another 1,000-page, trillion dollar experiment... that vastly expands the role of the federal government in the personal health care decisions of every American,” Sen. Mitch McConnell (R-Ky.) warned.

House Majority Leader Steny Hoyer would not rule out the possibility that the House would vote for identical Senate language, thus avoiding having the bill go to conference for scrutiny and debate and getting it quickly to President Obama’s desk.

Stunned by the August town halls, Tea parties and the massive Sept. 12 taxpayer rally in Washington, liberals know the window is closing on their plan to nationalize one-sixth of America’s economy and put our health care decisions in the hands of government bureaucrats.  So they are working in the dark to ram this through before most Americans find out.

Even with all the subterfuge, some details have slipped out:

--Do what we say, not what we do--Congress has exempted itself from mandatory coverage provisions that they want to impose on their fellow citizens.

--Taxing through higher deduction requirements— Dick Morris has been warning everyone that the seven-and-a-half percent trigger to deduct medical expenses on your federal tax return will be bumped to ten percent. That would shake billions out of people’s pockets who have had to spend significant money on health care, and will be an effective violation of the Obama campaign promise not to raise taxes on Americans making less than $250,000.

--Different tax rates for people in different states. The Wall Street Journal’s Kimberly Strassel reports: “Majority Leader Harry Reid …worked out a deal by which the federal government will pay all of his home state’s additional Medicaid expenses for the next five years. Under the majority leader’s very special formula, only three other states – Oregon, Rhode Island and Michigan – qualify for this perk.” This means that Americans in other states would subsidize constituents of Harry Reid and some of his political friends. A dozen Democratic governors have come out against the Medicaid mandate as a budget buster, but Reid is covering his own political interests – with your money.

Are you angry yet?

Rep. Michelle Bachmann (R-Minn.) took to the floor of the House during the earlier spendathon and said the nation is in the grip of “gangster government,” in which powerful interests are raiding the treasury to ensure their own continued power. The health care “reform” bill is more of the same, but even more dangerous. This is about the government’s power of life and death over our families, not just our wallets.

The liberal “mainstream” media are providing cover for all this. None is asking to see the health bill language. You have to go to places like the Media Research Center’s Newsbusters blog, where Brent Bozell exposed the Reid plan.

The Left will get away with all this unless Americans speak out now and let them know in no uncertain terms that this is unacceptable and tyrannical. America needs to speak with a loud, single demand of our rulers in Washington: