Robert Jeffress
|
Posted: May 13, 2020 12:01 AM
Share   Tweet
The opinions expressed by columnists are their own and do not necessarily represent the views of Townhall.com. 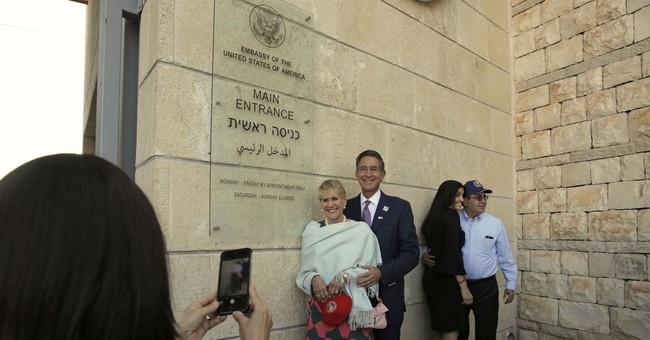 Two years ago today I was honored to deliver the opening prayer at the dedication of the United States Embassy in Jerusalem, a historic event signaling our nation’s recognition of Jerusalem as the true capital of Israel. Although in 1995 Congress had affirmed a desire to move our embassy from Tel Aviv to Jerusalem and other U.S. presidents including Barack Obama and George W. Bush had pledged to make the change, it was President Donald Trump who demonstrated the resolve to withstand international criticism to fulfill that promise and energize both his evangelical Christian and Jewish base of supporters.

Don’t be surprised if you see the president’s re-election campaign trumpet this signal achievement beginning this week until the election—and for good reason. However, President Trump’s action was more than the fulfillment of a campaign promise to a key group of supporters. Instead, this move of our embassy to Jerusalem is significant for three key reason.

However, both history and archaeology confirm that the Jewish people occupied the land of Israel more than 3000 years ago. Excavations in the City of David today affirm that King David ruled over Israel and named Jerusalem as its capital in 1000 BC -- 1100 years before the terms “Palestine” and “Palestinian” were invented by the Roman Emperor Hadrian in 100 AD to disenfranchise the Jewish people from their history. It is highly ironic that the City of David is located in a Palestinian village in the disputed West Bank because the excavations there are Exhibit A that the Jews lived in Jerusalem long before any ancestors of today’s Palestinians. While Palestinians certainly deserve to be treated with compassion and dignity, there is no historical evidence that those who lived in the land of Israel prior to Jewish conquest under Joshua in the 13th century BC have any genealogical connection to today’s Palestinians.

Second, the recognition of Jerusalem as the capital of Israel affirms our respect for the nation of Israel. Think about this. The international community recognizes the right of every nation to determine its own capital. No one could imagine the United Nations objecting to Russia, France, China, or the United States choosing which of their cities would be the seat of their respective governments. Why then was there such international outrage—including condemnation from the United Nations—for President Trump recognizing the right of Israel to choose Jerusalem as its capital?

The only explanation is the virulent antisemitism that has infected the entire global community. No one will soon forget Iran’s declaration in 2012 that they would “wipe Israel off the face of the earth.” While other nations might not verbalize their animosity toward Israel so blatantly, their continued opposition to Israel’s right to protect herself from continued external threats reveals that unspoken hostility toward this nation.

Israel has proven to be America’s only reliable ally in the volatile Middle East. It only makes sense that we would support Israel’s right to exist, her right to protect herself, and her right to determine her own capital city.

Finally, our recognition of Jerusalem as the capital of Israel affirms our respect for the Jewish people. Many people are curious about why evangelical Christians like myself are so supportive of the Jewish people. Some imagine that our love for Israel and the Jewish people is based on some bizarre desire we have to instigate an international conflict that will somehow accelerate the end of the world and the return of Jesus Christ. While I certainly believe in the biblical promise of the return of Christ to earth one day, I am convinced that there is absolutely nothing we can do to change the day of that event that God has written in indelible ink on His calendar!

The reason Christians like myself love and support the Jewish people and the nation of Israel is rooted in God’s promise to Abraham, the forefather of the Jewish nation, and his descendants: “I will bless those who bless you, and the one who curses you I will curse” (Genesis 12:3). God has a special affection for the Jewish people and the nation of Israel, and the Bible is replete with warnings that any individual or nation “who touches [Israel] touches the apple of God’s eye" (Zechariah 2:8).

America is not exempt from God’s promise or God’s warning about Israel. One primary reason God has blessed the United States of America is because of our history of support for this nation which is the “apple of God’s eye.” A multitude of evangelical Christians and people of the Jewish faith alike believe that God’s continued favor on the United States depends upon our support of Israel.

There is no safer place for an individual or a nation to be than on the right side of God.

Dr. Robert Jeffress is pastor of the 14,000-member First Baptist Church, Dallas, a Fox News contributor, and host of the Fox Nation program “Pathway to Victory.”