Do Parents Want Their Children on Uncle Shrink’s Couch?

Robert Holland
|
Posted: Feb 29, 2016 11:00 AM
Share   Tweet
The opinions expressed by columnists are their own and do not necessarily represent the views of Townhall.com. 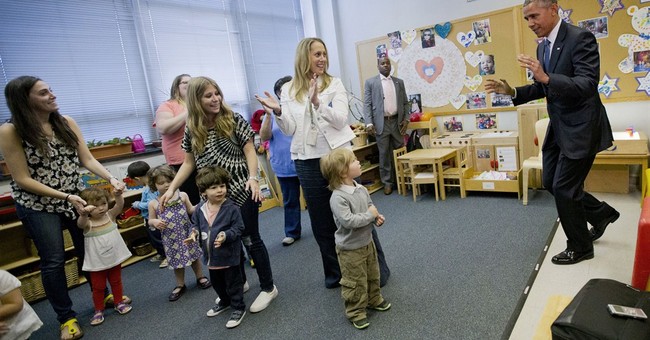 Uncle Sam is becoming “Uncle Shrink” to millions of schoolchildren, including many preschoolers, who are now subject to various psychology-focused educational components that have been implanted in federal education legislation over the past decade.

One of the most influential ways the federal government is molding young minds is through “social and emotional learning” (SEL) programs, a prominent feature of the omnibus Every Student Succeeds Act (ESSA), which was signed into law by President Barack Obama in December 2015.

SEL has no clear definition in federal law, but many education sites tout SEL as instilling in students the necessary attitudes and skills that will supposedly enable them to manage their emotions, which in turn theoretically helps them do good things, such as showing empathy for others.

Very much in the same vein is the Strengthening Research Through Education Act (SETRA), which is currently being considered by Congress and will likely be passed soon. SETRA is a reauthorization of a George W. Bush-era law that extended the U.S. Education Department’s research arm into the collection of personal data about students and also authorized the use of linked state longitudinal databases.

Proceeding so far with minimal debate in Washington, DC, SETRA would expand federal education research to pupils’ “social and emotional learning, and the acquisition of competencies and skills, including the ability to think critically, solve complex problems, evaluate evidence, and communicate effectively.”

This kind of subjective probing of children’s attitudes, beliefs, and behavior amounts to psychological profiling that (thanks to electronic dossiers) could haunt an individual throughout a lifetime.

Dr. Karen Effrem, a pediatrician who has tracked this trend for years as the president of Education Liberty Watch, laments, “Parents are expected to submit their children to this kind of government profiling and psychological experimentation with no explanation, no way to express concern, [and no way to] opt their children out.”

Effrem also says SETRA is incredibly problematic because parents are afforded “no way to see the federally mandated assessments or to find out what private, sensitive psychological data was collected on their children as part of some online assessment and shared with some third-party vendor without their consent.”

Starting with the 2016–17 school year, the exploration of what education theorists call “the affective domain”—meaning feelings and emotions, as opposed to actual thought—will spread to the fairly well-respected National Assessment of Educational Progress (NAEP), also called the Nation’s Report Card. A background survey accompanying NAEP will attempt to assess a child’s grit and motivation, among other qualities.

If the late John Wayne showed “true grit” in his Western movies—grit being perseverance in pursuit of a goal—how in tarnation does a student exhibit that trait by filling out a federal form? The kid may be tired, he may be sick, or he might just be sick and tired of being psychoanalyzed by proxy, but his facetious answers will rank him low on the Grit-o-Meter, and if that nugget pops up some day from a database, it might cost him a job.

Parents and educators concerned about ESSA, the successor to No Child Left Behind and the latest version of the mammoth Elementary and Secondary Education Act, should watch carefully for a big push by some to advance federal preschool programs now that a $250 million program of competitive grants for state pre-K initiatives has been made permanent in federal law. This will bolster the Obama administration’s latest version of Race to the Top, the Early Learning Challenge—also known as “Baby Common Core”—which encourages the socio-emotional assessment of preschoolers.

The proposals made by two states that are eagerly seeking their cuts of the loot indicate where all this is heading: “California will offer additional provider training in assessing social-emotional learning and ensure greater access to developmental and behavioral screenings. … [Minnesota’s] existing birth-to-five child development standards will be aligned with K–12 standards, which will [be] expanded to include non-academic developmental domains for children ages five to 12,” according to a summary by the federally supported Early Learning Challenge Collaborative.

ESSA also calls for an extensive “family engagement policy,” which, according to a recent policy draft by the U.S. Departments of Education and the Department of Health and Human Services, will begin prenatally and continue “throughout a child’s developmental and educational experiences.”

Along the way, say the bureaucratic behemoths, the government must “prioritize engagement around children’s social-emotional and behavioral health.”

In plain language, this means the government will assess children every single step (or crawl) of the way, from cradle to career, to be certain they acquire all the attitudes, beliefs, and dispositions the omniscient, omnipotent government deems they must have. SEL, baby, SEL.

Uncle Shrink approves, but what about U.S. parents? Are they ready to let the government assume their child-rearing responsibilities?