Robert Charles
|
Posted: Nov 14, 2016 12:01 AM
Share   Tweet
The opinions expressed by columnists are their own and do not necessarily represent the views of Townhall.com. 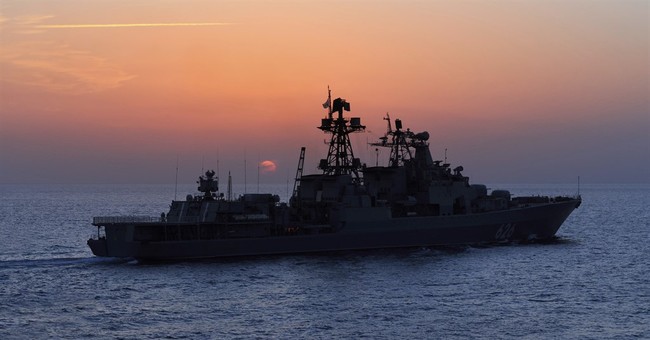 The Obama Navy has decided, under Secretary Ray Mabus, to end perceived disadvantages, inequalities and differences (God forbid) that result from enlisted Navy personnel developing their own specialty, and taking pride in that rating and its history. These specialized Navy names and symbols date, in some cases, to the Revolutionary War. John Paul Jones, Father of the American Navy, is said to have used terms like bowman, helmsman, yeoman and rifleman – all headed for the nearest dustbin. Among the many ill-conceived changes that have come to the Obama Navy in recent years, this is one President-elect Trump can reverse, and should.

The argument for this new bit of social engineering is that, by ending the 91 historic and life-defining ratings, a new Navy will “promote more cross-training and boost sailors’ post-service employment opportunity.” Follow this logic, and you may end up where many sailors do – wondering what is going on, where it is leading, and whether it can all be stopped.

First, understand that Navy ratings describe specific skills and abilities, confirming a sailor’s mastery of sub-skills which can be lifesaving and contribute to the unit’s strength, health, performance and capacity. A sailor wears the rating on his or her left shoulder and was, until September 2016, identified by it.

If strength, health, performance, and capacity are part attitude – and they are – pride of purpose should not be diminished. That is especially true now, when morale in the Navy is shaken, according to recent surveys. Change for the sake of change is a poor rationale. In this instance, the cost of change is likely erosion of pride and espirit de corps.

Let’s get specific. My grandfather attended the Naval Academy, Class of 1925, and concluded his active duty service with skills as an engineer and naval architect. My father, by contrast, was an enlisted sailor with a wholly different specialty and rating. Both men took pride in what they did. Part of that pride was historic, the way a first baseman remembers Lou Gehrig played the position. Part pride is identity, and recognition of the specialization.

Asked for justification, Navy leadership offered that the change gives “flexibility” in assignments and is more easily “understood” by the American public. One must ask if the role of the Navy is be a social science experiment or public relations machine, or deter, fight and win wars. Should the priority really be on “cross-training,” “post-service employment,” “flexible assignment,” and “public relations,” or on the sailors and their mission – depth of expertise, pride in purpose, focus on critical specialization, readiness for war, and fighting?

Consider adopting this “blur the field” approach in medicine, law or engineering. Imagine that, instead of having specialties like neurosurgery, anesthesiology, medical toxicology, congenital heart disease, hematology, oncology, nephrology, transplant hepatology, maternal and fetal medicine, gastroenterology, pulmonology and dozens more, you got a “doctor,” a few flavors of practitioner. Would you be confident in your ability to fight disease and deter or win the war against cancer or heart disease?

Suppose in law, you got a trusts attorney for commercial litigation, divorce attorney for patent filing, adoption attorney for criminal and civil defense, or medical malpractice counsel for incorporating your company. Worse, you got a generalist who knew little about a lot, and not much about anything. Ditto for engineering. Can you imagine entrusting a skyscraper, bridge, hospital or canal to an aerodynamic sewers guru; worse still, an airplane to generalists in hull design or rail transportation? Obviously, specialties matter, along with pride and proficiency in them.

Finally, consider the irony in another ratings change, driven by political correctness. All designations ending in the suffix “-man” are being scrapped for “gender neutral” names. Gone are occupational titles like “yeoman,” “airman,” “fire controlman,” identifiers with long histories. Apparently, in a push for gender-neutral purity, the Obama Navy received enough push-back to keep “seaman,” which gives a lie to their whole enterprise.

But just consider where language “purification” and erasing of history, meaning and import will end, if taken to the logical extreme. While “mankind” is gender-neutral, and the embodiment of a taxonomic binomial name for homo sapiens, that is no longer reason enough to preserve our history. Never mind that “-man” comes from Old England for homo sapiens, and from the proto-German “-mann,” meaning the same thing – meaning mean and women. Never mind that women are not clamoring for the change, or that “mankind,” while the word exists, is sound argument for no change. We must join in being collectively offended; it is just the thing to do.

What if we do lose remaining specialties tied to “mankind,” except “seaman?” Answer: We are likely to lose other words, too. Soon gone will be your mailman, boatman, cattleman, crewman, congressman, clergyman, doorman, footman, lineman, defenseman, batman, longshoreman, milkman, policeman, fireman, salesman, adman, repairman, stockman… You see the absurdity of taking offense at all things?

In truth, perhaps we should abolish “mankind,” obviating all distinctions of every agitating, annoying and differentiating sort, since someone will always be annoyed or disaffected by words. Language is like that. It has the power to offend, sometimes without intent.

So we can conclude this exercise with a tour de force in linguistic bleaching, erasing all disparities and every perceived verbal slight by calling ourselves “same” in all regards. At that point, we will probably be ready for another John Paul Johns, and back will come the bowman, helmsman, yeoman and rifleman. Or perhaps we can avoid all this… just honoring some of our Nation’s longstanding and benign traditions, not tossing them in the nearest dustbin. Just an idea. We shall see what the Trump Navy does.