Robert Charles
|
Posted: Oct 08, 2016 1:43 PM
Share   Tweet
The opinions expressed by columnists are their own and do not necessarily represent the views of Townhall.com. 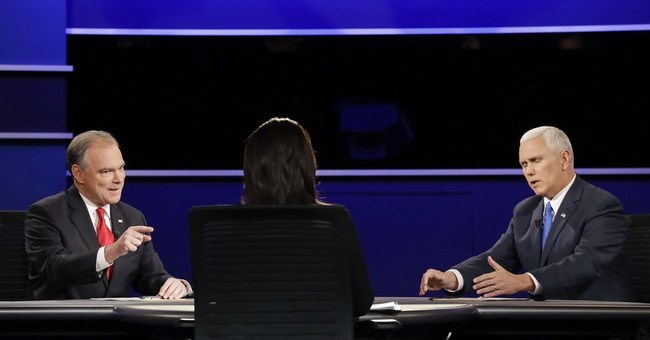 Trump’s recent comments about women have made me literally sick to my stomach.  I understand what Ryan, McConnell and others are feeling, a sense of utter disbelief, revulsion and disgust.  This entire election has made me, as a former public servant, military officer, lawyer, husband and father, sick to my stomach.  We are all – like it or not – in harm’s way.  We are all facing a moral hazard.  The choice before us, as so many of us now realize, is a Hobson’s choice, a choice between two impossible options, a lose-lose, compounded by the fact that not voting or voting a third party is a surrogate for one of the other choices, which only means we are in terrible corner.

As a lifelong Republican, who worked in the White Houses of Ronald Reagan and George Herbert Walker Bush, in the Gingrich leadership and for Colin Powell as an Assistant Secretary, I ask myself – where have the leaders gone?  Where are those who know the meaning of honor and dignity, service to others, basic humility, respect for law, rule of law, understanding no one is above the law?  Where are the historically grounded, morally fit future leaders?

Who will save the US Supreme Court, reestablish national security, preserve our security at home, restore the Nation’s national identity, recreate earnest dialogue among well-meaning, decent Americans and make the US Congress work?  Where are those who will preserve this great Nation, for which so many lie dead in places like Arlington and Normandy?  Are we truly to become just another drifting mass of humanity, unanchored to timeless and moral truths, of the sort our Founders fought for and enshrined in our Constitution and Bill of Rights?  Are we destined to become just another corrupt third world Nation, in a world defined no more by any sense of compass or principled leadership?  The answer to these questions – for anyone who is a Reagan/Bush/Gingrich/Powell optimist, who has worked in the private sector, paid taxes, hoped on leadership, who loves his family, town and Nation, must be no.

But then what do we do now, as we confront this terrible, ever more surreal Hobson’s choice?   The answer to this question is harder.  It begins with a long and loud sigh.  This is my sigh, right here.   Ted Cruz was right the first time, and so were the Founders.  If we are imperfect humans, we still have a right to expect more from our candidates for high office.  We must – in the end – vote our conscience, vote to preserve the US Supreme Court and our security, avoid ingrained public corruption and degradation both, to the greatest extent possible.

I cannot vote for what seems to me, on overwhelming public evidence, a massive criminal enterprise, one that boggles the mind with each new email release.  To me, one candidate’s brazen criminal intent, bold disrespect for rule of law, arrogance and indifference to our Nation’s core principles disqualifies her from future public service.  But I cannot easily vote for what seems a candidate who makes a mockery of human respect, civility, decency and seriousness of purpose without degradation and disgust.

Where is the Cruz/Kasich ticket?  The Pence/Powell ticket?  The Walker/Rubio ticket?  The choice is lose-lose, leaving us all feeling ill-served by the primary process and conventions, devoid of real and substantive leadership at a pivotal time – one marked by domestic discord, international distress, incalculable public debt, and national security peril?  The compass needle is spinning.  May it stop where our nation can take a bearing, keep it, and not hit the shoals … This is not easy.

If there were a means for doing so, if there were time, if there were options, both major parties should start again, re-look their flawed tickets, exercise executive and moral authority, take stock of damning information, and pick anew.  But I fear we are nearing the falls, too late to claw upstream, or too far out to sea for turning back.  Democracy is hard in the best of times.  It has never been harder for the average voter than this year.  Think hard before you vote.  We have just one Constitution, one Republic, and one future to hand to our children.  It is already at risk, and we also know this:  It will be flawed.   Still, as revelations mount, we must vote.   Cast with care.