Only a 'Socialist Country' Would Let Euro-Globalists Set Our Prices

Rick Amato
|
Posted: Mar 15, 2019 10:55 AM
Share   Tweet
The opinions expressed by columnists are their own and do not necessarily represent the views of Townhall.com. 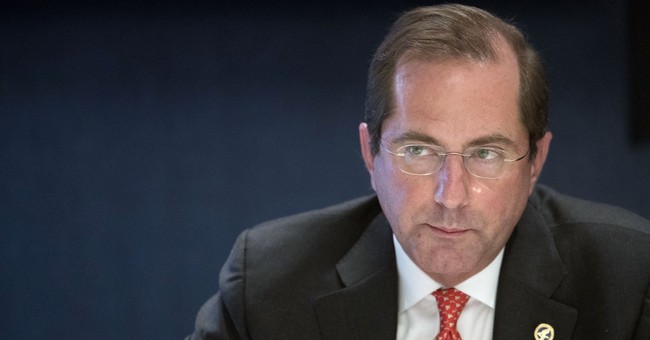 It sounds like the opening of a bad joke: "What's more socialist than setting your own price controls?"

But in this case, the punchline -- "using the Europeans' price controls" -- is the outrageous reality of the recent proposal from an agency run amok.

In glaring contrast to President Trump bravely articulating his "America First" message at, among many other venues, the annual gathering of the world's smuggest globalists at Davos, Switzerland, one of his own agencies wants to hand over U.S. economic policy to France.

"America will never be a socialist country," Trump declared proudly and adamantly in his state of the union.

Azar is, improbably, a former pharmaceutical executive, but he now seems determined to prove his independence by embracing economic nonsense, so long as it's anti-drug industry nonsense.

He is the cheerleader-in-chief for what he calls the "International Pricing Index" that would set price controls for Medicare based on what the Europeans are doing.

Belgium, Canada, Finland, France, Germany, Slovakia, Sweden, the United Kingdom -- these are all countries from which the IPI would be based. Are you noticing a pattern? They're all single-payer.

Let me let you in on a dirty little secret of why these countries pay lower "prices" than places where supply and demand still has something to do with it: their rates are set by government fiat, and with no small amount of nation-state-sized bullying to go along with it.

A large majority of new medicines are invented by American companies. Those American companies often face a difficult choice in overseas "markets": take a single-payer government's below market "price," or watch the socialist pigs just steal the intellectual property -- which costs billions of dollars in private capital to produce -- outright.

This is why Azar's ridiculous insistence these companies are "offer[ing] deep discounts abroad" is so outrageous. Like they are enjoying it!

Someone's getting ripped off, all right. It's the American companies that spend billions and employ millions inventing the next generation of life-saving medicines, only to watch a bunch of Euro-moochers who can't afford their Obamacare-on-steroids health care systems perform the intellectual property equivalent of a stick-up job.

"If you can't beat 'em, join 'em" is not exactly what President Trump embodied in his confident defense of American Exceptionalism in the state of the union.

"America was founded on liberty and independence - not government coercion, domination, and control," he said, adding, "We are born free, and we will stay free."

And it's not like things aren't bad enough without some bureaucrat in the Trump administration inventing creative new ways to let Brussels globalists run our lives.

Democrats, at the outset of what promises to be a Lord of the Flies-style primary, only set in 1917 Moscow, sound like a Leninists versus the Trotskyites debate at the People's Assembly.

Liberals are atwitter over something they call "Modern Monetary Theory." The argument is, as it's leading intellectual proponent and Bernie Sanders staffer Stephanie Kelton explained, that we can afford all the things, because "the government can just print more money to pay for new spending."

If that's the case, let's skip "livable wage" and go straight to "opulent wage," if you don't mind. Who wants a yacht? Don't worry, the government can just print more money!

So, there's enough madness going around already without a Trump cabinet official doing his level best to single-handedly destroy the research and design pipeline for new medicines, thank you very much.

Price controls are always a bad idea. But using the Europeans' price controls is just humiliating. America will never be a socialist country -- so lets put this terrible idea in the dustbin of history, to join the many, many failed socialist states it already contains.