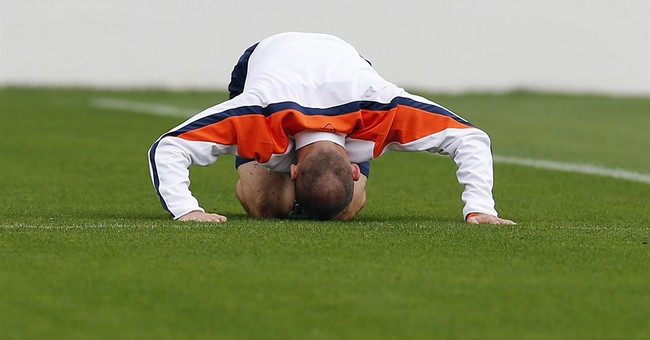 Soccer’s preeminent tournament, the World Cup, wraps up this weekend. We’ve already seen a semifinal (Argentina and the Netherlands) end in a tie, requiring a shoot-out to determine the winner.

The shoot-out requires entirely different skills than the game that’s preceded it, of course. “The match proper is a team game, but a penalty kick is a lone endeavor,” as The Economist explained recently.

That British news magazine noted that the English team is especially inept in shoot-outs. This year that didn’t matter, as the English were banished from the World Cup in the preliminary round anyway. Still, the squad has suffered six losses in seven shoot-outs at international competitions, making it the worst in that category since penalty kicks were introduced as tie-breakers in 1982. The Economist, semi-jokingly, calls this “the English disease.”

But that’s not the real disease plaguing the English side. The real problem, undiagnosed but possibly worsening, is that in international soccer the English go it alone. They compete against, instead of as teammates of, the rest of the United Kingdom. In the games as in life, England is weaker without Scotland, Wales and Northern Ireland.

Consider Wales, which is small, but produces some excellent soccer players. Not enough to field a competitive team (it’s only made the World Cup finals once) but enough to have contributed five players to the British soccer team that competed in the 2012 Olympics, when the entire U.K. competed as a single team.

Politics may yet follow sports down the separatist path.

As in an international soccer game, a relative handful of people will decide the fate of the two countries involved. The vote is happening only in Scotland, so even if every eligible voter there takes part, that would still leave 57 million potential voters unrepresented. Something like 11 out of every 12 people in the U.K. will be mere spectators in this game of independence.

Polls show the vote could go either way. “A record 43 percent back the campaign for independence, according to the latest poll by Panelbase, up two points from May, with the percentage against dropping one point to 46 percent,” Reuters reported in mid-June. That’s too close for comfort in London, where the British government realizes it’s stronger with Scotland than it would be without it.

The British government is taking mild steps to encourage the Scots to remain.

Of course, Scottish separatists believe they can have economic benefits such as membership in the European Union, can keep the British pound as their currency, and can have official independence as well.

That seems unlikely. As economist William Easterly notes in his new book, “The Tyranny of Experts,” national borders tend to make trade more difficult and more expensive. He imagines how difficult life would be if an apartment building in New York City suddenly declared independence; residents would need to clear Customs just to go to work. This also helps explain why Africa has struggled in recent decades: too many borders to cross. Scotland might find itself more isolated than it expects to.

If there’s one consolation for the English, it’s that this decision won’t come down to a shoot-out. But that doesn’t mean the country won’t lose, as it did, decisively, in this year’s World Cup. Dividing up the U.K. would make it more difficult or both England and Scotland to succeed on the world stage.