A Flood of Federal Disasters 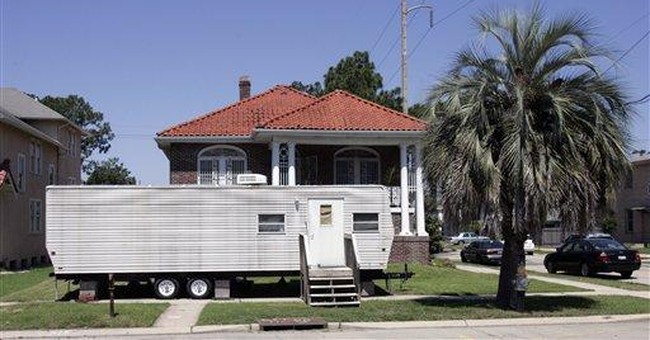 News flash: It often snows in Syracuse. And it rains. Even floods, sometimes.

Another news flash: these are not federal disasters. Or, at least, they shouldn’t be. But these days, far too many things are labeled as federal disasters -- often weeks or even months later.

For example, according to a news release, “The Federal Emergency Management Agency (FEMA) today announced that another $9.6 million has been approved in response to the April 3-5 ice storm, bringing the total amount of federal disaster aid approved to more than $15 million.” But this release is dated July 3, 2003 -- a full three months after the storm. Presumably -- even in Syracuse, where the “news” was released -- most of the ice had melted by July.

But that’s par for the course these days. In 2008 the George W. Bush administration declared 143 federal disasters. That’s quite a jump from the 53 his father declared during his final year in office in 1992. It’s not that things are getting worse -- it’s just that politicians have discovered that, “disasters are very political events,” as President Clinton’s FEMA director once put it.

And indeed, the jump in federal disaster declarations happened under Clinton, in the election year of 1996. He declared 157 disasters, up from 38 in 1995. Disasters have been happening at a feverish pace ever since. There had never been more than 56 declarations in any year before 1996; there have been at least 100 in every year (except one) since.

The problem is that disasters happen locally and need to be handled locally. By the time FEMA is ready to ride to the rescue, it’s usually too late to make a difference. But states have noticed that Washington is willing to kick in for 75 percent of the cost of anything declared a “disaster,” so they’re doing what seems sensible: Asking for more federal money while cutting their own disaster response budgets by almost a quarter.

Meanwhile, FEMA is stretched too thin. It’s ordered to get involved in a new “disaster” every third day. And yet, as national security expert Matt Mayer of The Heritage Foundation puts it, “With staffing levels and budgets only nominally larger than the pre-1993 levels, it should be no surprise that FEMA is not able to handle a catastrophic disaster.”

The answer isn’t to spend more money. It’s to return FEMA to its traditional place by sharply reducing the number of disaster declarations. Luckily, the agency now has a leader who seems to understand that.

“It’s like a Chinese finger trap,” Craig Fugate told The Atlantic magazine. He’s learned, the magazine wrote in its September issue, that “If the feds do more, the public, along with state and local officials, do less. They come to expect ice and water in 24 hours and full reimbursement for sodden carpets. But as part of a federal system, FEMA is designed to defer to state and local officials. If another Katrina hits, and the locals are overwhelmed, a full-strength federal response will inevitably take time.” Time will tell whether Fugate is able to stem the tide of disaster declarations.

Of course, disasters aren’t the only state responsibilities that have been taken over by the federal government. States are enjoying a windfall from the so-called stimulus package Obama rammed through Congress this year. The White House estimates some $144 billion worth of state and local relief will flow out of Washington.

But this will only put a bandage on a gaping wound. States have spent themselves into bankruptcy in recent years. Since 1998, states increased their spending by an average of 6 percent per year. That includes California’s planned $3 billion for stem cell research and New York’s $131 billion 2009 budget -- a 9 percent increase over last year. Did you get a 9 percent raise in 2009? Did anyone?

It should come as no surprise that the states with the biggest budgets turn around and elect the most liberal legislators -- Barbara Boxer and Nancy Pelosi from California, Charles Schumer and Charlie Rangel from New York, to name a few.

“Natural disasters rarely, if ever, involved the federal government from 1787 to 1993,” Mayer notes. They shouldn’t in the future. Bank on it: It will snow in Syracuse this year. And it won’t be a disaster, no matter what Washington says.