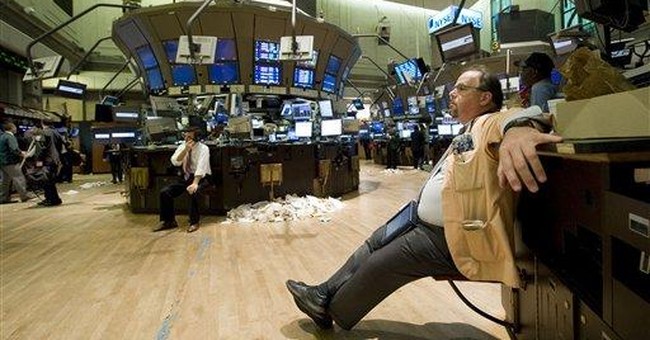 With the World Series around the corner, it’s a good time to consider the famous quote of French-born intellectual Jacques Martin Barzun. “Whoever wants to know the heart and mind of America had better learn baseball.”

That’s not as true as it used to be back when baseball was a true national pastime. Also, of course, Barzun had in mind the game played by nine men on a diamond, not the “inside baseball” games so popular in Washington. For in fact, the people who play D.C.-style baseball almost certainly don’t know the “heart and mind of America.”

Writing about the country’s ongoing economic troubles, Fineman commented, “Another good move in times like these is to get outside of the Beltway. I did that the other day, when I flew to Mississippi for the first presidential debate.”

Now, how is traveling with the Washington press corps to a debate getting “outside the Beltway?” Reporters, columnists and “deputy bureau chiefs” bring their Beltway with them wherever they go.

Fineman’s out of touch, but at least he did manage to see some typical Americans. His fellow Newsweek columnist Evan Thomas isn’t even certain that such people could be trusted to run this great country.

“I went to a party two Sundays ago given by a friend, a well-known journalist, who is well connected in Washington and friends with various movers and shakers, particularly in the legal world,” Thomas wrote in June.

“There was a certain amount of worry that the Washington establishment was about to embark upon one of its periodic acts of cannibalism and start questioning the client relationships or legal involvements of other Washington insiders close to [Sen. Barack] Obama.”

Yes, we cannot have that. How could anyone dare question the relationships of an Obama supporter? Just putting an “I support change” sign on one’s front lawn should be enough to guarantee fairness. Heck, it’s working for Gwen Ifill and Linda Douglass, two “journalists” with close ties to the Obama campaign.

Thomas continued, “we all agreed it would be unfortunate if, say, Greg Craig were disqualified from taking a top job with Obama (whom Craig advises on foreign policy) because he has, necessarily, represented some shady types over the years as a white-collar defense lawyer.”

First, it’s not necessarily clear that a lawyer must represent “shady types.” For example, it’s difficult to imagine Atticus Finch, the small-town lawyer portrayed in the book “To Kill A Mockingbird,” counseling a bad guy.

Second, it’s obvious Obama’s crack foreign policy advisors haven’t done a great job. His position on Iraq, the most important foreign policy issue of the last decade, is a mess.

“Six years ago, I stood up and opposed this war at a time when it was politically risky to do so,” Obama intoned during the first presidential debate. It’s a familiar line, but an incorrect one. It wasn’t actually politically risky for him, since he was only an Illinois state senator at the time. Who cared what he thought about foreign policy?

Obama added that “we hadn’t finished the job in Afghanistan. We hadn’t caught bin Laden.” And he concluded that the problem with Iraq is that “from a strategic national security perspective, al Qaeda is resurgent, stronger now than at any time since 2001.”

That’s not true. Last May, CIA Director Michael Hayden told The Washington Post we’ve seen, the “Near strategic defeat of al Qaeda in Iraq. Near strategic defeat for al Qaeda in Saudi Arabia. Significant setbacks for al Qaeda globally -- and here I’m going to use the word ‘ideologically’ -- as a lot of the Islamic world pushes back on their form of Islam.” The fight against terrorism is going well.

The idea that the war in Iraq was a distraction from the true war on terror is a leftover soundbite from John Kerry’s 2004 campaign. You’d think, after four years, all those Washington experts could have come up with a better talking point -- maybe one that’s even accurate.

William F. Buckley once wrote he’d “rather entrust the government of the United States to the first 400 people listed in the Boston telephone directory than to the faculty of Harvard University.” The same thing goes for the vaunted “Washington insiders.” Surely a group of ordinary Americans -- business people, parents, blue-collar workers – could run the country as well as the “experts” we’ve got doing so now.

Of course, they’ll never get the chance to do so. Because that would involve actual change, instead of what we’ll end up with in 2008: mere rhetorical change.

Rebecca Downs
The Chinese Communist Party Goes After a Sitting Member of Congress, and He Responds in the Best Way
Rebecca Downs
Biden Reminds Gun Owners the Government Has Nuclear Weapons
Katie Pavlich
Al Sharpton Made a Solid Observation About Race Relations and Latte-Drinking Libs Who Are Obsessed About It
Matt Vespa
John McAfee Found Dead in Prison Cell Hours After Court Ruled in Favor of Extraditing to US
Rebecca Downs